Playing games boils down to making a series of choices that, you hope, will bring you victory. But the best games understand that choosing between good options isn’t as fun or interesting as choosing between painful ones. It’s tempting to take comfort in the easy choices, but the tension of choosing between painful choices is secretly what gives games their excitement. The struggle is necessary, and it’s even better if the choices you’re given are dictated directly by your opponents. That’s what makes Fact or Fiction such a seminal card design in Magic: the Gathering: It puts the power of this struggle in the opponent’s hands, making it all the more potent. 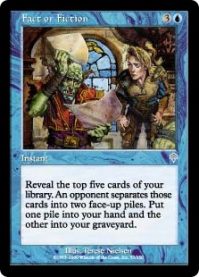 Fact or Fiction is a spell that puts more cards in your hand, but in an atypical way. You reveal the top five cards of your deck and give them to an opponent. That opponent then organizes them into two piles, with no limit on what has to be in each pile – one can be empty and the other can have all five cards, if the opponent wishes. Then, the player who played Fact or Fiction chooses one of these piles and puts the cards in it into their hand, and puts the unchosen pile of cards into their discard pile.

Put realistically, Fact or Fiction lets you play a card and get around three cards in return. In Magic, that’s a pretty good rate at the mana cost of four. Drawing cards is one of the most powerful things that you can do in Magic, so anything that lets you gain superior card advantage – having more functioning cards in your hand than your opponent – is desirable. Fact or Fiction also gives you a good amount of card selection. By going five deep into your deck, you gain a greater chance of finding a card you need at a critical juncture in the game.

Of course, you opponent isn’t just going to give you exactly the cards you need without a little sacrifice first. By letting your opponent dictate the terms of the transaction, it ensures that you’ll have to make a difficult decision with all the knowledge the opponent has of the play state. The beauty of Fact or Fiction, though, is that you have the final say in what happens in this interaction while simultaneously having your decision be dependent on what the opponent did. It’s a master stroke of game design that tests both players’ skill levels. What usually ends up happening is that the opponent splits up the two best cards so that you don’t get both of them. But no matter what, having the opponent choose the piles ensures that you have to make some painful choices.

Fact or Fiction is one of the best designed cards in Magic: the Gathering because of how multilayered the decision making behind every resolution is. It’s incredibly interactive, with your opponent dictating what combinations of cards you have to choose from, and it understands the beauty in choosing between less than ideal choices.

Card games, Magic The Gathering, The Board Soul

Ad Free, Games, The Board Soul

A Chat With Sara Alfageeh