“Can a video game make you cry?”

This was the question posed by the marketing campaign around King’s Quest IV: The Perils of Rosella back in 1988. Even way back then, games developers were looking to find the limits of this young medium, chasing the dream of being as legitimate of a storytelling vehicle as movies or books. Today we’re in a place where we can say that games are finding their own path to becoming a storytelling medium, and you can point to any number of key moments that move players in some form or another – Aeris’s death in Final Fantasy VII, the heartbreaking climax of Shadow of the Colossus, the elation and wonder of Flower – all these moments made players feel something, and yes, even sadness to the point of tears.

Board games never really had a similar moment of determination, at least not in our lifetimes. It may be because it’s so old, but board games as a medium never seemed insecure with its place in the storytelling pantheon. The latest board game boom certainly pushed the storytelling envelope with games like Mansions of Madness, Arkham Horror, and Above and Below, but they’re largely building on old ideas. Tales of the Arabian Nights, a game made in the 1980s, did the Encounter Book that Above and Below thrives on three decades earlier, which is itself an evolution of the old Choose Your Own Adventure books.

And yet for its long list of bonafides, board gaming has a reputation of being mainly mechanics-focused. So can a board game make you cry? Let me introduce Feldon of the Third Path. 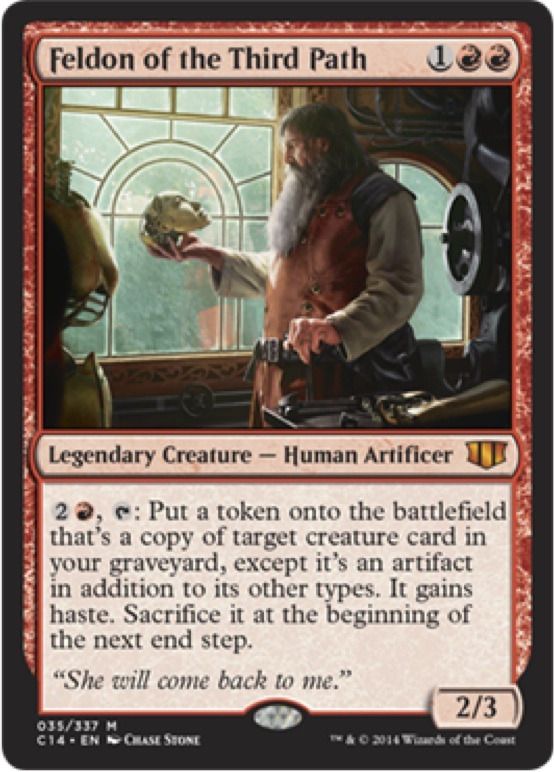 A recent card from venerable card game Magic: the Gathering, Feldon is a powerful creature that also happens to best illustrate how tabletop game mechanics can be evocative and moving, how a single card in a card game can tell its own story without knowing anything else but the basic rules of the game. You don’t need to know Feldon’s backstory to understand what he’s about, as the mechanics, illustration, and flavor text weave a heartbreaking tale all their own.

Feldon of the Third Path creates a token creature that’s a copy of a creature card in your graveyard, but it goes away at the end of the turn. Note that the copy is also an artifact and that Feldon is an Artificer, because that connects to the card art and flavor text. His art shows him looking forlorn at an artificial feminine face. But the kicker is the flavor text, which connects these different elements together into something incredibly sad:

“She will come back to me.”

With that one sentence, the full gravity of what the card’s trying to tell you hits you like a freight train. Feldon is an artificer who lost someone very dear to him and is using his skills to try to remake her. His goal isn’t merely to make a living doll of her. He’s using her body from the grave to try to make an exact duplicate that, for all intents and purposes, is her. The problem is that each copy he creates doesn’t last, dying off soon after it’s born. But Feldon keeps building her again and again, hoping each time that it will last, a vicious cycle of eternal grief and false hope.

None of what I detailed here is from any extraneous backstory outside of the card. You can glean all of this just from the card itself. It’s a compact, powerful story that all comes together thanks to the mechanics of the game it belongs to and some well-considered flavor additions. Can Feldon make you cry? That’s entirely subjective, but the incredible atmosphere of melancholy this card creates speaks to the power of tabletop mechanics to move you in ways no other medium can.

Magic The Gathering, Tabletop, TCG, The Board Soul