This feature is a reprint from Unwinnable Monthly #101. If you like what you see, grab the magazine for less than ten dollars, or subscribe and get all future magazines for half price.

You’re probably familiar with the trappings of the hardboiled detective story: a lone detective depending on his wits alone to solve a crime in a world full of corruption. There’s vice and guns and smoky clubs where sirens sing their songs. Long shadows embrace everything. Bullets seek the innocent.

What if, instead of sleazy fat cats and cops on the take, the very fabric of creation was rotten to the core? What if the sound of the gun is the Big Bang itself? Now imagine if the bullet in question strikes the heart of a god. That’s where Genesis Noir begins.

Developed by Feral Cat Den, a small design studio in New York consisting of creative lead Evan Anthony and technical lead Jeremy Abel, Genesis Noir is a adventure game that uses exploration, interaction and generative art to tell the story of a murder at the beginning of time. Unlike most detective stories, where justice of some sort is usually served, here the idea is to undo, and re-do, creation in order to prevent the murder from ever happening.

While Feral Cat Den has worked on small games and like a 8-bit RPG and commercial interactive projects, Genesis Noir is their first foray into full-scale indie development. Their experience with small, novel projects, and the inspiration of interactive toys like Windosill, are sure to make for a surprising experience.

Fresh off a successful Kickstarter for the game, Evan and Jeremy took time out of development to discuss noir, mind-bending puzzles and other high concepts with us. 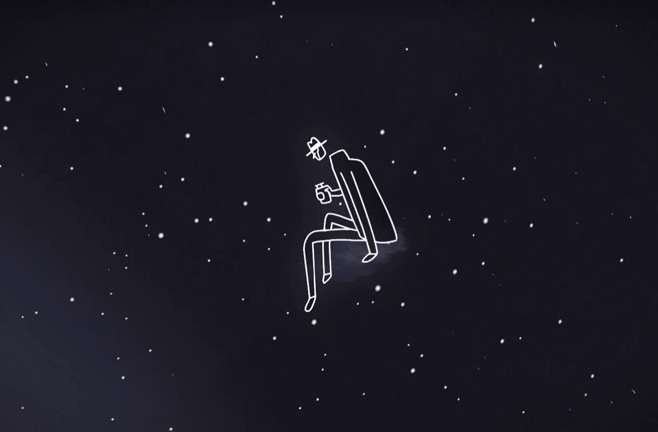 Genesis Noir has one of the highest of high concepts I’ve encountered in a while. How did you settle on a noir set during the Big Bang?

Evan Anthony: The inspiration for Genesis Noir comes from reading Italo Calvino’s Cosmicomics, a wonderful collection of short stories that populates abstract science fiction with heartfelt characters. Calvino writes of characters that transcend space and time yet have all the same emotions as us here on Earth. It makes for tremendously beautiful storytelling.

I wondered about other Cosmicomic stories that could be told. I wanted to make my own. While crossing the Williamsburg Bridge in New York City on my morning commute, I began to imagine a seedier world than the one Calvino wrote about. One where The Big Bang wasn’t so innocent. A Genesis that was Noir. Noir and the Big Bang felt natural union that could pay homage to Cosmicomics but also be distinct.

Can you talk about your intentions with the art style? It seems smart to balance the cosmic concepts of the game with a minimal style, but I’d be interested to learn what the thinking that went into the decision was.

E.A.: Our goal with the art style is to find an aesthetic that conveys film noir, leans on our backgrounds in web interactive and motion graphic animation and is also practical to produce.

We’ve been a big fan of animation studios like Buck, Giant Ant, Golden Wolf and many others. We’re drawn to the way the animations they create combine clever transitions, metaphorical imagery and abstracted design. We haven’t seen too many games explore these techniques and wanted to create an interactive form of these animations. The simple graphic drawings enable us to combine 2d and 3d assets, produce assets nimbly and are also well suited to the black and white look of film noir.

The minimalist approach lets us create scenes that are very simple, but still compelling. We’re able to play with scale and perspective in ways that a more traditional design wouldn’t allow. 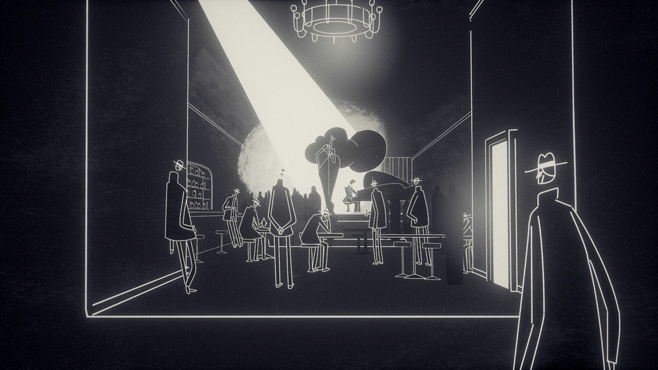 Despite the minimalism, you retain a strong noir sensibility. How did you go about that? What is it about the trappings of noir that you find appealing and how is it important for the game? Is it another way to ground cosmic concepts that are difficult to comprehend?

E.A.: This is a very good question! I think there’s a strong connection between the noir, space and minimalism – they’re quite natural companions. Film noir typically deals with conflict larger than the protagonist, existentialism and the sublime. Noir heroes feel adrift and tiny in a way that is similar to our insignificance in the universe.

The puzzles I’ve seen tend towards mind-bending, playing with scale and the relationship of objects in surprising ways. How do you go about designing puzzles like that?

E.A.: We start with some loose sketches and exploratory writing to get a general idea. We’ll then bring it into Cinema 4D and create an animated prototype to see how it might feel and work. Once we’ve built a prototype in Unreal, we have iterate a lot to get everything to feel nice and strike a balance between clarity and surprise. 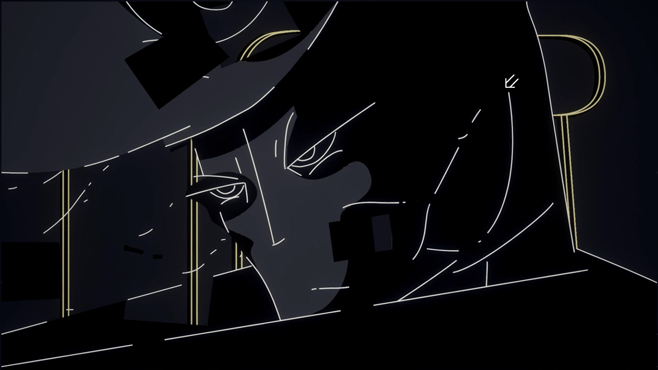 A continuation of the previous question. It is one thing to create a surprising puzzle, it is another to build a game out of many of them. How do you approach variety and guard against players becoming jaded by a cascade of novel approaches to puzzles?

Genesis Noir is a game with an emphasis on novel interactions, but not every interaction will be unique. We certainly are using repetition to help build tension and release. We will reuse interactions (and create variations on them), both for production sanity as well as overall enjoyment. It’s nice to return to something familiar and discover variations on it.

I love interactive toys and generative art – they are often so simple in execution but so experimental in nature – so a lot of what I’ve seen in Genesis Noir is catnip for me. You mention Windosill as an inspiration – I was hoping you could dig into that and share your thoughts on the appeal of these little digital doo-dads?

E.A.: Windosill, by Vectorpark, is our absolute favorite game of all time. It’s a surrealist masterpiece that has a level of craft that is just absurd (especially since one guy made it all!). Everything is interactive and everything feels nice. Ultimately is a game that feels alive and real – the simple visual design leads the player to underestimate the level of interactivity and be constantly surprised.

We want to combine this style of surprising interactions with storytelling and characters.

Weird question: how do younger folks react to the rotary phone mechanic?

E.A.: We exhibited our build at Day of the Devs and there were many families walking about. Young children definitely had no idea what a rotary dial was and needed some help from their parents. It was very interesting to see! 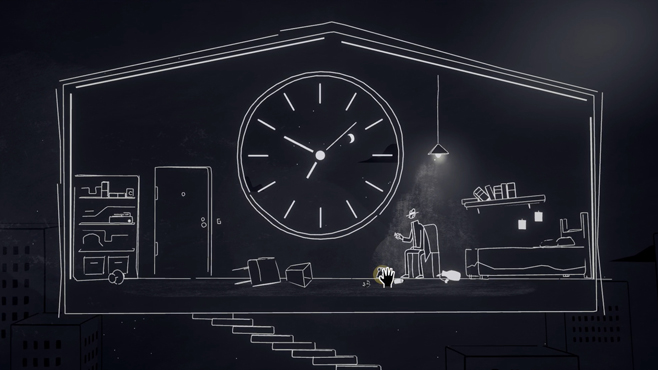 Jeremy Abel: Before we started making the game full time, we had built a small prototype in a few weeks using Unity. This was back in 2015 and we found it quite difficult to deal with 3D character animation. We’d import our character and suddenly his legs would be shifted 50 meters to the left or something. We probably lost about a week of time just trying to get our character to import correctly. This was around the same time when Epic announced that Unreal Engine 4 would be available to anyone for a reasonable profit license and you’d get full source code access to the engine. This is huge, because now if the character imports oddly, we can actually attempt to figure out why and then fix the problem at the engine level. So we tried Unreal and to our delight our character imported just fine, along with everything else.

Having access to the engine code is probably the most important thing for me as a programmer, because it means that we’ll always have some avenue to fix an engine issue that isn’t just complaining on forums until the next version of the engine comes out. The other huge thing has been Blueprints, which is Unreal’s visual programming setup. It’s allowed Evan to build out tons of interactions and various pieces on his own.

As for difficulties, the main one has just been the fact that rotation in 3D is a nightmare problem I would not wish upon my worst enemies. 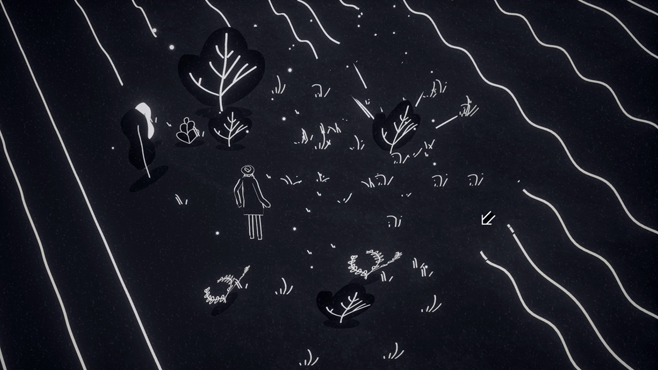 E.A.: Pay the rent for one! The Unreal Dev Grant has been a very generous aid in our production of Genesis Noir, but we also really value the support and recognition it entails as well. We’re honored and hope to show that Unreal Engine is flexible and intuitive enough for beginners to make visually unique games.

To learn more about Genesis Noir, check out the official site and play the interactive teaser. To stay up to date on the game’s development, join the mailing list.

Revving the Engine: The Artful Escape of Francis Vendetti

The Surreal Cognitive Dissonance of Paratopic