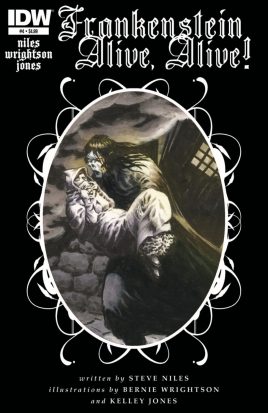 And so it ends. The beautiful Frankenstein Alive, Alive! miniseries concludes with this issue, six years after issue #1 originally hit the stands. Sadly in that time original artist Bernie Wrightson has passed, leaving behind a legacy of fantastic artwork. His was a massive loss to the comic book world, and fortunately we have one more comic book featuring new Bernie Wrightson artwork to marvel at. Frankenstein Alive, Alive! #4 is a wonderful conclusion to this miniseries, and leaves readers with a sense of hope.

Wrightson chose artist Kelley Jones to finish this project, and Jones does admirable work completing this story. He illustrates most of the issue, and no bones are made that it’s his art through color choices, and not him trying to replicate Wrightson. Bernie Wrightson did finish the layouts for this issue, so Jones essentially is completing the work of the man who influenced him greatly. I’m glad he did, and this miniseries wasn’t left up in the air in some random collection featuring pages of finished Wrightson art for what became an unfinished miniseries. While I admit the issue does rush to the conclusion somewhat, the creative team really had no other choice.

Steve Niles manages to conclude the story with this issue by writing it almost like an epilogue, except there’s no need for that thanks to how the series begins. In this issue The Monster is stuck taking care of a pregnant female prisoner of Dr. Ingles, the man who he has been staying with for some time. Ingles has sinister goals for the woman, and due to events in previous issues there are now macabre happenings on his vast estate. Things happen quickly over a few panels and pages, and by the end of the issue The Monster is left with the best outcome possible for him, as well as a satisfying arc for the character over the course of these four issues. After being crushed by guilt after the events of Frankenstein it seems he now feels somewhat redeemed.

We know that things work out in a fashion for The Monster from the beginning of issue one, we just don’t know how he goes from a suicidal soul in the arctic wasteland to a circus performer at the sideshow who’s finally content. What causes him to have a change of heart, and what is his philosophy about life going forward? Find out in this issue, one that I highly recommend.

I had the honor of seeing Bernie Wrightson draw the alien from The Thing in front of a group of convention goers at HeroesCon in North Carolina around five years ago. Just watching the effort poured into the auction artwork for that convention makes me realize now how much love and pain went into the creation of this series, as Wrightson was becoming more and more ill during its creation. At that moment years ago I imagined what a comic series about The Thing drawn by him would look like, and I’ve thought about other potential series enhanced by the artistic magic of Bernie Wrightson over the years. Perusing his artwork online there are many places where he dips into other realms of horror, science fiction and fantasy. The beauty of the work is there, and in some cases it’s up to our imaginations now to fill in the blanks by becoming lost in the line and details of his existing work. I’m sure he wouldn’t have had it any other way.

I’ve been waiting for Gideon Falls to drop for months, since I first got word from the Jeff Lemire mailing list. Lemire 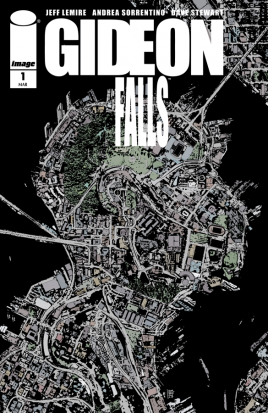 is one of my favorite writers in comics today (tied with Alex de Campi) and the breadth of his work amazes me. Early press didn’t reveal much about the book (a good thing) and issue #1 itself doesn’t actually reveal much (also a good thing) but there’s just enough to reel one in. Gideon Falls is slated to be an ongoing series (hence the measured, deliberate release of details in issue #1) but in the book’s appendix, Lemire shares he and artist Andrea Sorrentino have the whole series planned out, and will base the actual length on how it is taken by readers.

Gideon Falls is a dual narrative. At the outset, it’s hard to see where the stories might converge. One story is of Father Fred, a priest with a shadowy past, assigned to a parish in a small nowhere town. The other is of Norton Sinclair, struggling with obsession, an obsession that has disabled him and at times hospitalized him. What’s Sinclair obsessed with? Why, the messages his city’s trash leaves for him.

So, is Gideon Falls really about obsession? Sinclair, as the younger of the two protagonists, knows he isn’t well, but doesn’t know the dark depths his obsessions will take him. Father Fred, older (and ostensibly wiser) doesn’t quite reveal his problems, but scars of past obsessions are there.

Lemire and artist Andrea Sorrentino have paired together before, on both sides of the so-called big leagues (Green Arrow, Old Man Logan.) Lemire writes in the appendix that the two have been eager to partner on a creator-owned series, and they’ve been cooking up Gideon Falls for a few years. Sorrentino has a light touch to his line work, but characters and scenery are still well defined. This definition is aided by colorist Dave Stewart, who uses a fairly muted palette, but makes his colors distinct. Many scenes have a grainy, scratchy quality. Stewart uses shades of gray, purple and red not to just light scenes, but for the colors of the characters’ clothes.

The one thing I regret about buying Gideon Falls is that I accidentally ordered for my pull list the variant cover (art by Lemire – it made me think of his watercolor work on A.D. After Death. This isn’t bad, I just really liked the main cover.) So if that’s the only complaint I have about something, well then I just need to shut the hell up! As much as I’m rooting for Lemire and Sorrentino here, I think a finite end could make the story really tight (not a mini series per se, but maybe 12 issues?)

In a strange incidence of my worlds colliding, Lemire mentions in the appendix (again with the damn appendix, Sal!) that in his early days, he shared studio space in Toronto with musician/artist Andre Ethier, who I am familiar with from his garage-soul band, the Deadly Snakes.