The first issue of Vinegar Teeth, a brand-new offering from Dark Horse featuring a script by Damon Gentry and Troy 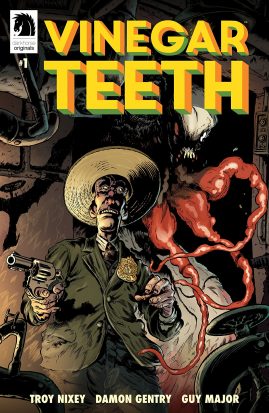 Nixey with art by Nixey, has one of the best openers I’ve ever seen in comics. The first page is almost entirely onomatopoetic: in a courtroom a cacophony of “blahs” from the prosecutor and gallery is interrupted only by the shouted first (Artie) and last (Buckle) names of our protagonist, each larger-than-life and an angry red.

Further down the page, the man himself lets out a burp, a blurp, a bloop, and my favorite – a scoob. Eventually, as the last panel zooms in for a close up on his face, drawn in Nixey’s unmistakably unforgiving style, he mutters something incoherent, represented by a tiny, white, shivering skull. It’s a wild ride from start to finish, and turns out it’s only the frame story.

The first two pages of the main storyline are also filled only by onomatopoetic sounds – at this point I have officially gone all in on this book, by the way – and depict the spawning of a gigantic Lovecraftian horror that resembles a fat and fleshy louse. Or maybe it depicts the spawning of a million of them, I’m not entirely sure. The mostly incomprehensible racket is further highlighted by Nixey’s heavy-ink, shaky linework – it’s a comic that looks like it’s drawn by a drunk.

When we’re eventually introduced to Detective Buckle’s new partner, the titular “Vinegar Teeth” – the aforementioned louse-thing, after it gallantly saved Buckle’s life during a sting operation gone wrong – it’s laugh-out-loud funny to hear it speak in perfect, uninflected English. It’s even funnier that it finds its new nickname so delightful, despite its clearly being meant to be an insult (delivered by Artie, natch). Artie Buckle’s the type of loose canon that doesn’t play by the rules, you see, though he gets results. He’s not too keen on being paired up with Cthulhu’s bastard kid, and he’s going to let everyone know it, especially the mayor and police chief.

The rest of the issue has the odd couple shaking down a petty criminal at the docks and catching a whiff of something much larger going on in this unnamed city’s crime world. Artie’s a boozer and VT’s a good-natured innocent, and the latter saves the former’s butt one more time before this issue’s done. The whole thing is disorienting, cheeky, visceral, and mildly disgusting, the perfect vibe for a horror/humor/hardboiled genre mash-up. Can’t wait to tune in next time. 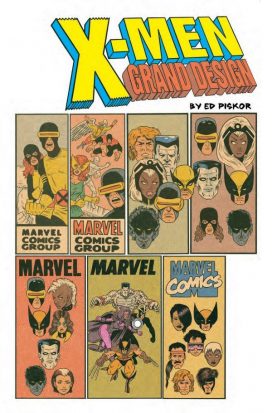 It’s common knowledge in the comic book world that the dense history of the X-Men is a labyrinth of corridors that go nowhere. Years of continuity lapses and creative talent changes have resulted in too many retcons, deaths, contradictions and insignificant characters not worth remembering. Eisner award winner Ed Piskor seeks to change that with this six-part Grand Design miniseries. The miniseries will be released in increments of two, each increment covering an era of the team that will ultimately end up at issue 300 of Uncanny X-Men. Issues one and two of this series tell the story up until Giant-Size X-Men #1, the comic released in 1975 that reinvented the series with characters like Storm, Nightcrawler, Colossus and of course Wolverine. There’s a lot to sort through before we get to that point.

Having read just this, a summary of the first 65 or so issues of Uncanny X-Men,I realize why such a massive reset had to occur. Early X-Men was trying hard to establish its identity, and many hands tried to throw things against the wall to see what would stick, which ultimately led to a huge mess. For every Magneto, Juggernaut and Sentinel there is Mutant Master, Mimic and Unus the Untouchable. What Ed Piskor does so cleverly is weave ALL of these characters into the narrative. Since it’s being told to the Recorder by Uatu the Watcher, his singular POV provides linkage for many of the events that were later retroactively weaved into the storyline by Chris Claremont and others. Mister Sinister, the Phoenix, Shadow King, Cameron Hodge, Black Tom Cassidy, Legion and Forge for instance are now inserted into the linear narrative, and events are set up from the beginning that will be paid off later. We even get a straightforward summary of Professor X’s life leading up to the X-Men, something that was muddled over the decades by retcons.

Similarities to Piskor’s Hip Hop Family Tree are inevitable, since he does something similar there with the history of hip hop. Besides his detailed retro art style and details in his artwork and even in the paper itself of his comics to evoke old 1960s-80s comics, Piskor puts massive amounts of research into his projects. While many gloss over the first decade of X-Men save for a few moments Piskor revels in all of its insanity and importance. Funny details like characters wearing boxer shorts with hearts on them and the architects of Genosha deciding that Iceman will be the one that keeps their drinks cool fit in with Silver Age crazy moments, like the inexperienced X-Men blowing up a fleet of alien ships with their minds and Magneto’s Savage Land kingdom of dinosaurs, frog people and Sauron the Ptero-Man.

It seems like Marvel is cool with the X-Men again, and a project like this may be their way of reintroducing the gang to the world. One thing I noticed from reading these two wonderful issues of comic book goodness is how the X-Men was always its own brand of crazy separate from the rest of the Marvel Universe. I wasn’t too upset that these characters have existed on their own island mostly for the past decade or so, because there’s so much that can be done with their world just with what has been built over the last 50+ years. I am happy that they’re being treated well by Marvel again though, and I’m also happy that this project was greenlit. It will make a heck of a primer to this wonderful corner of the Marvel Universe for future generations, a corner that Marvel doesn’t seem ashamed of anymore.

Of course, that could all change tomorrow, or next week, or next year depending on what the next few billions are spent on by their corporate overlords. At least we have this and other inspired X-Comics coming down the pipeline for now. The Merry Mutants of Marvel have come a long way.