With titles like DMZ and Northlanders under his belt, Brian Wood is a sure commodity for a new comic. Wood’s new book, Mara, is the story of a volleyball champion in a futuristic world and the day she seemingly develops super powers.

In addition to her super powers, Mara is also a super star, the modern day equivalent of Lebron James or Tom Brady – sports celebrities who are known for their skills and the amount of money they make while doing it. But Wood doesn’t fully develop a lot of the ideas he introduces. Setting the story in the future requires a bit of explanation in and of itself, but Wood also has many minor conflicts – mostly dealing with relationships – that are not explored. 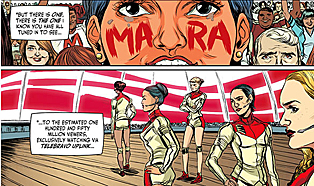 Furthermore, the book transitions from moment to moment without ever setting its focus, so while we get to see a few snippets of Mara’s private life, the world itself is delivered more through narrative boxes and news reports. The two or three city-wide shots show a massive world of light and sound, yet the scenes are tight and don’t do enough to depict just how big the world around the characters is.

Wood’s story, particularly in the last pages of the comic, relies on clear and sharp illustrations to aid the action. The stiffness of Ming Doyle’s art, however, hurts some of the action in the comic. Doyle’s drawings are detailed, but his rough-edged inks and inconsistent pencils give the imagery an erratic, blocky design. Jordie Bellaire isn’t given an extensive palette with which to work, but the consistency of colors is noticeable and the addition of the blue aura around Mara at the end of the book is a nice visual change.

Mara accomplishes some of its goals. Wood presents his characters, both main and secondary, introduces the conflict of the arc and gives readers a minor view of the world in which Mara lives. But the pacing throws off some of the more interesting questions like the countdown to Armageddon, Mara’s relationship with her teammate and her brother and the fact that volleyball has become a world-wide phenomenon.

Brian Wood wants readers to trust that the questions will be addressed, but he doesn’t give us much to go on. I’d be interested to see how Mara’s powers play into the military conflict, as well as just what Mara’s ability is (super speed, I think). But the comic didn’t leave a lasting impression and the end result is not something that leaves me wanting more. 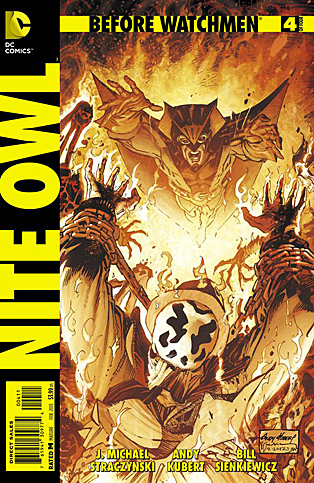 For penning a book entitled Nite Owl, writer J. Michael Straczynski spends most of his time writing about Rorschach. Parts of the comic are good – particularly those dealing with Dan Dreiberg and his relationship with the Twilight Lady. But by its end, the book becomes another trite action story that fails to gives readers much beyond a clichéd bad guy and an overt nod to Watchmen.

What we learn at the end of Nite Owl is that Rorschach and Dreiberg battled a crazy preacher whose ends-based thinking justified his violence towards women. How do we know this? He tells his whole nefarious plan to a tied up Rorschach who then uses the preacher’s own “The End Is Nigh” sign against him (and thus we see how he comes to carry the sign with him in Watchmen).

In Watchmen, Dan asks Rorschach whatever happened to their good times together, to which Rorschach replies, “You quit.” We don’t find out why in this comic, though. I thought this series would result in Dan finding a reason to turn in his costume, but I was wrong. His interactions with the Twilight Lady are intriguing, as they add depth to Dreiberg telling Laurie that the Twilight Lady was nothing more than an obsessed fan. We see they had a heartfelt connection, but one which would have brought them both ruin.

While the story falters, the art soars. Andy Kubert’s work in this comic is the best of the series. Shading and point of view are used for great effect, particularly in close-up facial shots (which are chilling and powerful). Kubert’s ability to depict fire makes the element a character of its own, and Brad Anderson’s colors add impressive depth to the visuals.

Nite Owl is really a comic about the last days of Rorschach and Dreiberg’s partnership, but it fails to bring those days to a close. The comic is also more about Rorschach than Nite Owl. It’s a disappointing series that gave us some good character moments, but which ultimately failed to ignite the same spark as other Before Watchmen books like Minutemen and Silk Spectre. 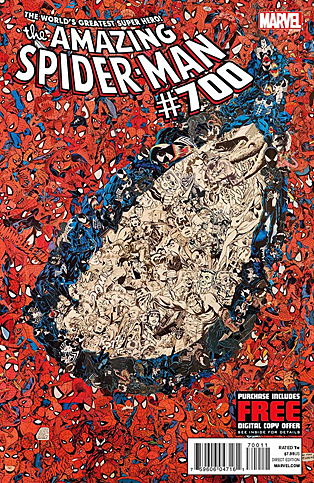 Bannen’s Book of the Week: Unless you live under a rock, you’ve probably heard about the ending of Amazing Spider-Man. If you haven’t, I’m going to spoil it for you, so be warned.

The book ends with Peter Parker dying in the body of Otto Octavius, while Otto survives in Peter’s body. So he will become the Superior Spider-Man, in that he will be a better Spider-Man that Peter could ever have been.

While I find the premise a bit gimmicky, and while I don’t really believe Peter died in Otto’s body, Dan Slott and Marvel deserve the utmost praise for having the strength to kill off one of their flagship characters and to do something with him that has never been done before.

Amazing Spider-Man #700 is a sprawling epic, fifty-two pages of story followed by several minor stories and pages of every cover of Amazing Spider-Man in its historic fifty year run. In this comic, Dan Slott is tonally a different writer than we’re used to. Gone are the current event jokes and the wispy, comical musings of Peter Parker. Characters are treated with reverence in this book. As Peter, Doc Ock’s screwy pronoun usage gets a bit annoying after a while, but as Doc Ock, Peter is a splendid villain. Through Slott, readers can see that the years of fighting nemeses have given Peter such an insight into their persona that makes it easy for him to slip into their shoes whenever he wants.

Having them slip into his, however, is what makes Spider-Man so powerful. Otto realizes how much Peter has pulled his punches over the years, and how he’s amassed a group of family and friends who care about him where Otto has nothing to show for himself but the rotten husk of a body. The climax of the comic is a beautiful mixture of storytelling and art, where Otto relives Peter’s greatest tragedies.

And as for the art, Humberto Ramos would not be my first choice to depict such a comic. I find his style a bit too cartoonish, but even he approaches this task with such respect and expertise that you’ll forget Ramos is the artist, especially in the more emotional moments of the book. The final pages, which look different than the rest of the comic, display Ramos’ gifts – abilities that show his consummate skill as an artist.

I was lucky enough not to have the ending of this comic spoiled for me, and I hope you’re reading this review after you, too, have read Amazing Spider-Man #700. No one stays dead in the comic world, so I don’t really believe Peter’s gone. I have a few theories as to what actually happened when he fought Otto, but I’m happy to sit back and enjoy the ride.

That said, I have the utmost respect for Dan Slott. It’s clear he loves the character, and despite how Spidey met his end, he went out as a hero, and Slott’s whole run on Amazing Spider-Man has been showing us that Peter Parker is, continuously, a hero – with or without a mask.

And the fact that so many people were affected by this comic only reinforces Spider-Man’s importance in our world, regardless of Mayan calendars, fiscal cliffs or horrendous acts of violence.

Despite all of these, we can always look to Spider-Man for guidance on how to get through our most troubling times.