At 46 pages long and with a cover price of $3.50, Nathan Edmondson’s The Dream Merchant is definitely worth the buy. But is the comic actually worth your time?

Tentatively, yes – if the comic has a bit more to offer in its next issue. 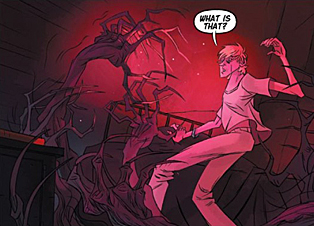 My hesitancy is due in part to the art. Konstantin Novosadov illustrates The Dream Merchant, but the visuals never quite settle, and they’re often inconsistent between panels. Faces, in particular, suffer from a lack of uniformity from panel to panel. Novosadov’s style is definitely unique, and he can turn up the detail when he needs to (like when he illustrates the cloaked, sinewy villains). But sometimes, his jagged, pointy character designs work against the softness he’s trying to portray.

Nathan Edmondson’s story is about a boy, Winslow, who can escape into a dream world that feels a bit too real. He’s joined in his quest by an admiring hospital cook who shares books with him and a mysterious stranger who knows all too well about Winslow’s dream world. Neither role in the story is fully formed yet, so for now, the girl, Anne, just feels like a romantic interest more than a lead character, and the old man, known as the Merchant of Dreams, is nothing more than a creepy old man with a cane.

And here’s a bit more of my hesitancy. The Dream Merchant hasn’t shown me that it’s truly an original piece of work. A lot of the elements in this story have been used before; they’re old tropes. The comic has work ahead if it plans on making a solid impact. So far, it hasn’t strayed from the pack. But Nathan Edmondson is talented, and this is only the first issue.

The Dream Merchant has promise, but it needs to define itself better – both in its story and its art – in the next issue. I’m interested in Winslow as a character, and I want to see more of the enigmatic dream world into which he transports. Hopefully, Nathan Edmonson obliges and gives The Dream Merchant the staying power it needs. 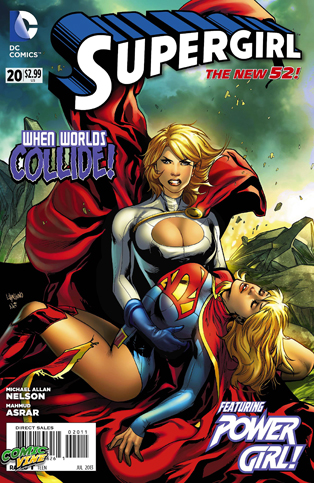 Talk about a fun read!

Issue #20 of Supergirl is a fluid, smartly-written action fest from its first page to its last. Writer Michael Allan Nelson scripts a funny and engaging story that addresses some major aspects of Supergirl, including where she came from, how she’s related to Power Girl and just where Power Girl’s costume came from.

That’s right, Power Girl’s back in her old “window with a view” suit, and Mahmud Asrar outdoes himself in this issue.

Each panel is chock full of detail, and each illustration is smooth and sharp. Asrar’s faces, particularly, are expertly drawn and unbelievably expressive. The comic hinges on some pretty well-placed humorous beats, and Asrar captures these with aplomb. We know that Supergirl is powerful, but Asrar goes to great lengths to show us that she is still untrained, and when we see Power Girl, we know that she’s the real brawn in this situation.

Nelson’s story avoids the characters ever throwing down with each other, and this change of pace makes for an original meeting. Watching them battle Kara’s security systems, instead, is equally entertaining and interesting, especially how the computing system processes two versions of the same person. But they work in tandem, and neither one outshines the other. If this issue was meant to whet readers’ appetites for a future team-up, I’d call it a clear success.

Between the strong and lively writing and the dynamic and gorgeous art, Supergirl is a win on every level. I was thinking of dropping the book a few issues back, but now I’m fully committed. I didn’t know if anyone could write as well as Mike Johnson, but Mike Allan Nelson is a worthy successor. And now is a great time to jump on board the series.

Especially if we’re in for more issues like this. 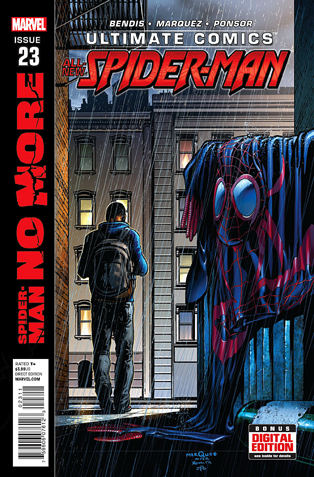 Bannen’s Book of the Week: Ultimate Comics Spider-Man opens with a very clear statement of purpose. On the first page are the words, “One Year Later,” meaning that Brian Michael Bendis has chosen to jump the story forward an entire year after Miles Morales’ mother died in the previous issue. I have to admit that I was immediately furious. Skipping a whole year seems lazy. A year’s worth of personal turmoil for Miles, seeing the fallout from his mother’s death and seeing his father wake up from a coma to find out his wife is dead are all tossed aside in the blink of an eye.

But dammit, the comic is good.

Bendis makes the issue about Miles coming back to the idea of being Spider-Man, but every moment is tinged by his loss. Miles definitely looks like a different person, and while we didn’t see him immediately try to pick up the pieces, we see that he’s trying to move on as best as he can. It’s heartbreaking.

Miles’ father has changed as well, taking on a sage role. He plays up the more practical side of their loss, and I have to give credit to Bendis for avoiding all the old tropes associated with losing a loved one like anger, alcoholism or depression. Instead, we see a family dealing with a tragedy in the best way it can.

To this end, the guest stars make the comic. Ganke, Miles’ best friend, has the best lines. And when Miles encounters Jessica Drew and Gwen Stacy, we can’t help but feel for him. This is also due in part to David Marquez. His sleek art stylings are crisp and detailed. Faces, in particular, benefit from his abilities. For example, in the year we haven’t seen Miles, he’s grown up a lot. Marquez captures this transition perfectly, introducing us to a hardened, volatile Miles. His face in the opening shot says it all.

The comic wouldn’t be complete without some action, so Bendis throws in a pretty intriguing cliffhanger involving two of Marvel’s most beloved characters making their appearance in the Ultimate Universe. I’m sure the end result of the “Spider-Man No More” arc is to bring Miles out of retirement, but I can’t bank on the idea. Bendis has proven – with Ultimate Spider-Man in particular – that he’s not afraid to take chances with his characters. If we see Miles back in action, I don’t think he’ll have the same looseness and jocundity. If anything, I’m afraid of the Spider-Man we’ll see.

So while the “One Year Later” starts off feeling like a gimmick, it ultimately works in Bendis’ favor, as he delivers one of the best issues of Ultimate Comics Spider-Man to date.