I have to confess that I know very little about Young Avengers. I picked the comic up on a whim because Marvel’s new NOW line has had more hits than misses. I’m happy that I did, because writer Kieron Gillen initiates readers perfectly in a debut issue that is well paced, well written and powerful in its character introductions. 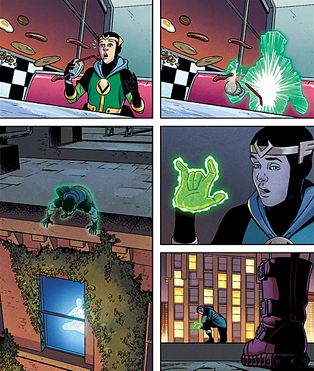 Luckily for uninitiated readers (like myself), Gillen is clear in his character introductions. I had no problem following the story as it moved from its celestial beginnings back to Earth for its dark and terrifying finale. What works more is how Gillen crafts his characters. Readers will have everything they need to know about the heroes in Young Avengers beyond their powers. The moments between Hulking and Wiccan, in particular, are so well-written that they border on poetry.

Furthermore, Gillen makes the story about the Young Avengers. Clearly, this book is about them and their experiences, not how they fit into the larger Marvel universe (at this point anyway). Giving the book this kind of distance makes the story much clearer and much more unique.

The art also aids the book, as Jamie McKelvie and Mike Norton craft lucid, sharp images for every page of the comic. At times, their work is like a cleaner version of Steve Dillon’s. Panel construction, in particular, is where the art and the writing come together to create smooth and clear storytelling. Luckily, this occurs several times in the book, and each time it works for full effect rather than feeling like a gimmick.

Readers who are new to Young Avengers will have a lot to like, from the strong characters to the crisp art. Readers who already have a base understanding of the characters will find, I think, that they are being treated with sincerity, and that the beginning issue has a lot in its setup for the future.

I’m glad I took a chance on Young Avengers because it was a book well worth its price of admission. 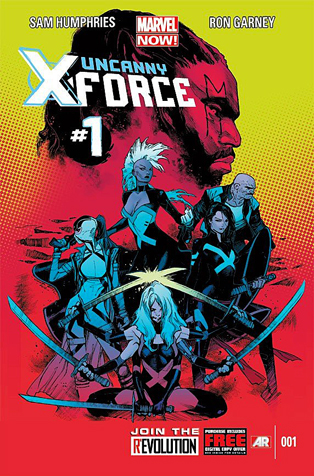 As a fan of Rick Remender’s Uncanny X-Force, I had to see what Sam Humphries could offer a series that was incredibly well-written and stocked with talented artists from its first to its last issue. Granted, he’s not Rick Remender, nor does he have to be. He can create his own world and put his own style and spin on the series – which he does. But Humphries’ Uncanny X-Force lacks some of the same humanity upon which Remender built his series.

To be clear, Humphries has some great moments. The finale took me by surprise, and the setup for it – involving a drug-fueled cult – was well-paced and well-written. The last two pages are also great surprises, one involving a character’s return, and the other involving an odd intimate moment between two unlikely characters (which in turn made me feel uncomfortable having witnessed it).

But Humphries is missing an element of compassion that appeared through characters like Deadpool and Fantomex. Humphries’ Uncanny X-Force is dark, violent and full of swears. Even the color scheme – flat colors like grays and browns – gives the comic a tonally different feel. This version of Psylocke is a venomous, vengeance-driven maniac. And with no one to lighten the timbre of the story, every moment feels charged with anger.

Beyond this, the comic has great visuals. Ron Garney’s slick character designs give everything a sleekness that plays well in the more action-heavy moments of the book. Betsy benefits most from Garney’s stylized art, as she looks both imposing and strong in every moment. Where Remender used Wolverine as his enforcer, Humphries has Psylocke, and she fits the role well.

I have a difficult time judging Uncanny X-Force after only one issue. While it doesn’t have the same impact as the previous series, it still has a lot to individualize itself and many places where the story can go. The mark of a good comic is really if you would shell out the money for a second issue, and my answer with Uncanny X-Force is yes.

The climax of this comic shows that things are going to get real good real fast, and I want to see it when it happens. 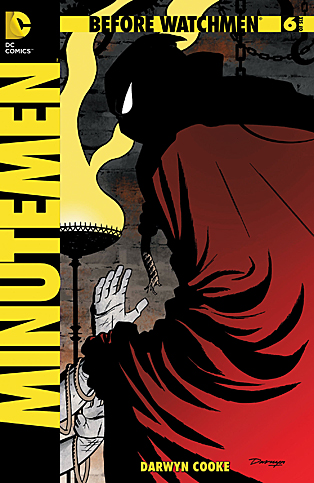 Bannen’s Book of the Week: When a book wraps up its main conflict halfway through its final issue, you know that one of two things will happen. One, the comic will have a denouement that falls flat; or two, the comic will leave a lasting impression long after the book has been shut.

Luckily, Before Watchmen: Minutemen is of the latter.

The comic borrows a bit from Watchmen in its setup, meaning that when Nite Owl and Mothman go to confront the villain, he’s located in an inaccessible stronghold much like when Nite Owl II and Rorschach confront Ozymandias in his arctic retreat. Darwyn Cooke dovetails Minutemen with Watchmen in other ways so that readers could put one down and pick up the other, easily seeing their connective moments. By the end of Minutemen, it’s clear that Hollis Mason is more than just a footnote in the overall story – he’s truly a hero, in and out of costume.

And similarly to Watchmen, Cooke crafts a finale that offers readers its own shocking revelation. Much like Adrian being behind the destruction of New York, Hollis Mason finds out what was driving his dogged determination to uncover the truth about Hooded Justice. Granted, Cooke’s ending is nowhere near as destructive, but readers will be surprised when they find out who was playing whom over the course of the series.

Cooke’s art is also as perfect as ever, except this time around he plays more with light and shadow, giving characters visual darkness to match their internal evil. Faces, too, get the royal treatment, and certain moments in this book caused a visceral reaction in this reviewer, particularly those that you know were hardest for the characters experiencing them.

As a lover of Watchmen, I really didn’t have high expectations for the Before Watchmen brand, but Darwyn Cooke has knocked this series out of the park. His methodical pacing, well-constructed characters, well-written story and increasing intensity have made this series the must-buy of all the Before Watchmen books. There’s a piece of the Watchmen mythos that benefits from his efforts, and regardless of personal convictions, I hope that fans of the original series come to appreciate – if not love – Cooke’s efforts on this book.