One of the best things about Captain America: The Winter Soldier was how they improved upon the role of Hydra in the world and how they took Steve’s shield and made it one of the coolest weapons a hero could wield. Similarly, All-New Captain-America does the same – but with Sam Wilson wearing the uniform of America’s greatest hero. Plus, issue #2 of the series delves right into the action, and what we’re given is 20 pages of non-stop action worthy of a summer blockbuster. 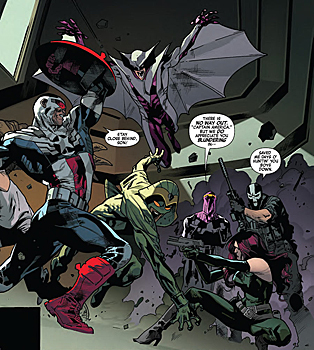 My only critique on the issue is Remender’s choppy internal dialogue. Getting used to Sam’s clipped thoughts is difficult, at least for me. I’m not sure if Remender’s looking to provide a completely unique voice for his hero, or if he’s trying to match the thoughts with the intensity on the page, but sometimes I feel like the story’s missing detail that would help transition from thought box to thought box.

That said, there’s a cinematic quality to the story, one that captures the exotic location of Bagalia and the direness of Sam’s situation. Page after page of the comic is Sam swooping through the city, battling Crossbones and trying to stay alive in a country populated by villains. If you were unsure of how well Sam would fill in for Cap, you’re pretty sure he’s the man for the job after just a few pages.

And for the quick pacing and the intense battles, Stuart Immonen illustrates a visually fluid story. It’s not hard to follow any of the fights, and Immonen’s superb pacing – either during the fights or during the slower, story-heavy moments – is definitely a boon for the comic. Both Wade Von Grawbadger and Marte Gracia bring Immonen’s drawings to life. One could easily imagine Marvel using this story as a future Captain America movie.

The finale brings the comic full circle and delivers a climax that is awesome and intense, and one which definitely raises the stakes for the future. Clearly, Remender is not afraid to make significant changes to Steve’s world, and the emotional effects will be resounding. I’m not a big Captain America fan, not because I don’t like the character, but just because I don’t know much about him. This is the kind of issue, however, that makes me want to learn more about Steve Rogers and Sam Wilson. This is the kind of issue that draws in new readers, and believe me, you won’t be disappointed if you decide now is a good time to jump on board. 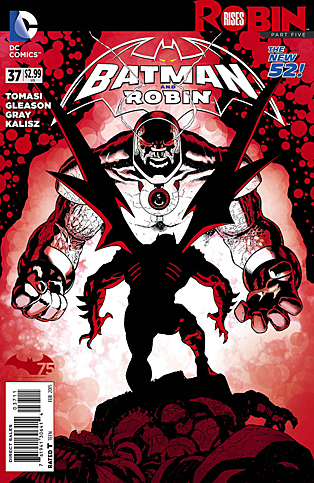 I don’t care what anyone says – seeing Batman beat up Darkseid is awesome.

Batman and Robin has been missing the piece that makes it whole for about 20 issues now. We’ve seen Bruce run the gamut of emotions, alienating himself from everyone as he struggled to come to deal with Damian’s death. Driven by grief, Bruce embarked on a number of failed attempts aimed at resurrecting his son. For a long time, Peter J. Tomasi has pushed Batman to the brink of insanity, and his latest attempt, involving a sliver of the Chaos Shard and DC’s Biggest Bad, Darkseid, seems to have finally paid off.

Much of this issue is gritty action. Bruce, of course, built a suit that could withstand the brutality of Apokolips, and he spends the majority of the comic going punch for punch with Darkseid. Tomasi’s pacing is awesome, as the buildup to the climax is both suspenseful and emotional. Even though much of the Bat-Family tagged along, they’re relegated to minor roles as Tomasi puts the focus on Bruce who proves, once again, that his resourcefulness and determination make him a great threat – even to gods.

And that’s probably the coolest aspect of the issue. Most of DC’s characters could easily throw down with Darkseid, but it takes a person like Batman – who has no superpowers – to put up the best fight. Once the dust settles, though, Tomasi comes back to the real heart of the issue: Bruce and Damian’s reunion. Because while I hate to spoil the ending, I can’t talk about the best part of the issue without ruining it.

Bruce is able to bring Damian back to the life, and the emotional weight of this moment is palpable. Patrick Gleason’s splash page of Bruce and Damian hugging gave me chills. Of course, this feel-good finale is short lived, as Tomasi caps off the issue with a climax that is both frustrating and intriguing. I can’t wait to see what happens next month, but I hope he doesn’t keep Batman and Robin apart for too long. I’ve been aching to see them back in action together.

Patrick Gleason deserves a lot of the credit for the success of the issue. Despite the heavy action focus and the dark color scheme (a lot of blacks and reds), the thread of the story is never lost. There’s a sharpness to Gleason’s work that translates Tomasi’s story fluidly from page to page. Granted, the darkness of the comic gets a bit overwhelming after a while, but this is Apokolips. You don’t expect to see sunshine and flowers.

The comic has a lot of cool moments, but the end result is that Damian is alive again. I remember how disgusted I was with the character when he first appeared, and then how heartbroken I was when he died. I’m glad he’s back. He’s a popular player in the DCU, and a valuable asset to the Batman mythos. Plus, a comic titled Batman and Robin isn’t the same when it’s missing one of its title characters. Hopefully, though, we’ll get back to the awesome dynamic duo storytelling that made this title a must read every month – not that it wasn’t the past 20 issues, but it definitely lacked the heart that made it so fun to read. 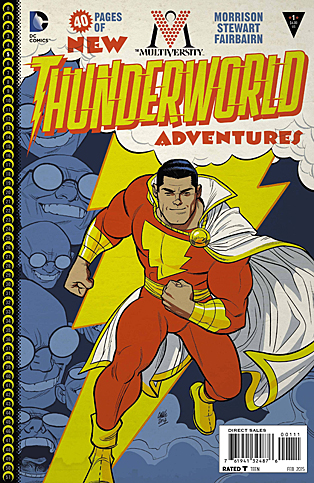 Back in the ’90s, I wrote a poem for my high school creative writing class. It was basically about how violent antiheroes like Venom, Punisher, Vengeance, the Eradicator Superman and their ilk were overtaking the superhero comic book. The mainstream superhero comics that stood firmly against that grain were The Batman Adventures, The Flash, Starman and The Power of Shazam. They were, for a time, the only superhero comics I read.

The latter was my introduction to Captain Marvel, Mary Marvel, the Wizard Shazam, Doctor Sivana and the rest of C.C. Beck’s wonderful creations. While the series took place in the then-present-day DC Universe, it felt a tinge more innocent and tongue-in-cheek than most to DC’s offerings.

The Multiversity: Thunderworld Adventures is the most straightforward of the Multiversity comics thus far. Grant Morrison, Cameron Stewart and Nathan Fairbairn tell a tale reminiscent of classic Captain Marvel comics. The good guys are good and the bad guys are bad. Like Power of Shazam, it goes against the rest of this series’ prevailing grain.

Whereas Society of Super-Heroes, Pax Americana and The Just deconstruct the superhero comic and challenge the reader to think about the medium and its history, Thunderworld encourages the reader to sit back and enjoy. It’s an incredibly well-crafted comic that hits every hope-filled note C.C. Beck’s classic Captain Marvel stories did.

Thunderworld begins with Shazam addressing the reader, continuing Multiversity’s growing theme of pulling the reader into the story and, by making us a part of it, Morrison and his collaborators make us complicit in the story’s events.

Immediately after the wizard addresses us, he is ambushed by Captain Marvel’s arch nemesis, Doctor Sivana. Sivana is flying a spaceship designed to look like the Rock of Eternity (Shazam’s home and the source of Captain Marvel’s power). Sivana is also in cahoots from Doctor Sivanas across the multiverse (one of which looks suspiciously like Walter White – which gave me a chuckle). The Sivanas have a plan. They begin mining their respective Rocks of Eternity so they can create something impossible on this world – a day where Sivana kills Captain Marvel. This day, if successful, would have a catastrophic effect on the multiverse. Heck, Sivana gets the idea from the end of Society of Super-Heroes!

Morrison, Stewart and Fairbairn tell a story that’s surprising and exciting while remaining traditional and true to Captain Marvel’s aesthetic and firm good-always-triumphs structure all while employing modern storytelling sensibilities.

If Pax Americana is about how Watchmen killed superhero comics, The Just is about how little the ’90s contributed to the mythological tapestry and Society of Superheroes is about the futility of retconning a simpler time into something more violent and morally gray, then Thunderworld is about embracing history, silliness and all in order to save not just the comics, but ourselves.