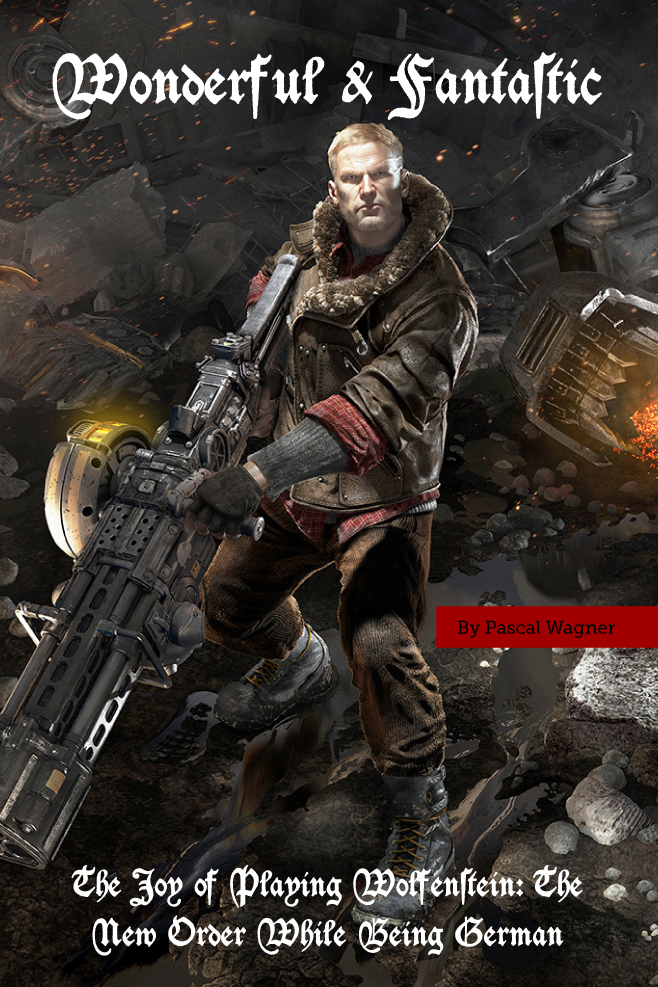 You would think that playing the first person Nazi shooter Wolfenstein: The New Order while living in Germany would feel alarming. The whole concept of the game is to mock our own past, after all. Who likes to be mocked, even more so by one of the parties that put your country back into place after it ventured into the abyss? It must be humiliating.

Let me tell you: it isn’t. Experiencing a fictional Third Reich dystopia like Wolfenstein’s is fantastic. It feels incredibly healthy, not only because playing a good game is fun in itself, but also because the game conveys a message that can be very hard to understand for people not socialized in Germany.

At least once a year while German children are in school, the curriculum confronts the terrible truth of Germany’s dark past: we unleashed hell onto Europe not once, but twice (although nobody seems to care much about the period of time after that infamous Sarajevo incident anymore). We have the horrors of Nazi Germany burned into our adolescent minds at regular intervals, to remind us that something so terrible should never, ever happen again. Which is good and right; shocking schoolchildren again and again with the historic details is an efficient way to do make them aware.

For most people it works. Those of us who have just a tiny bit of empathy and a modicum of intelligence are shocked by Germany’s grim past and aware of how history led us there. Some idiots might drift to the right out of adolescent defiance or outright stupidity, sure. We all knew that one guy shouting “Heil Hitler” across the schoolyard every recess. Sooner or later, even that guy realized nobody was laughing with him.

Germans are said to be humorless, which is wrong; we can be as black-humored as any Brit. The one thing we are hesitant to laugh about, though, is our past. Since for most people in the rest of the world the past is what defines Germany, that assumption of humorlessness is not far off. While the rest of the world has downed mechanical Nazis for decades, ridiculing that small-mustached Führer guy by Swiss-cheesing his metal body with a machine gun, the series I am talking about has never truly existed in Germany. The names Wolfenstein 3D, Castle Wolfenstein and Return to Castle Wolfenstein are but faint echoes here. People who like games have heard about them, but seldom played them.

That is because they were banned. Not forbidden, mind you, but excluded from being sold or advertised. The USK, Germany’s voluntary self-monitoring entertainment agency, has done a meticulous job in keeping that delicate topic of our past out of our videogames over the years. It is not fair to hate them for it. They kind of had to do it: Germany’s constitution stipulates that any National Socialist signs are to be censored. If you are a small, politically pressured agency confronted with a game that consists almost entirely of Nazi signage, shutting it down was surely the easiest way.

Yet times have changed, and with them a major viewpoint towards games. As far as the government is concerned, games are art and have a chance at being accepted as such. What is art can also be satire. So, when Wolfenstein: The New Order arrived in Germany, all we had to endure were a few redacted flags and localization. After all these years, it was possible for us to shoot knackwurst-eating, steel helmet-donning, cliché Nazi troopers with absurd amounts of lead from ridiculous weapons. For myself, having been too young to know the old Wolfenstein games let alone laboriously import them, I was finally confronted with a version of that past many Germans feared: a ludicrous one.

Pascal Wagner is a linguistics student dabbling in game studies at Munich University. When he isn’t playing weird independent games, he probably writes about them on languageatplay.net. Follow him on Twitter @indieflock.