Going into Planescape: Torment for the first time, I didn’t really know what to expect. I knew it was a CRPG based on AD&D’s 2nd edition, but that’s about it. I had somehow managed to avoid much in the way of spoilers for this 1999 game, but it was something I always intended to get around to, and the Steam Summer Sale gave me the perfect excuse to finally pull the trigger and jump in.

I like to think I keep an open mind about new-to-me games, but waking up dead was definitely on the short list of things I didn’t see coming. Planescape opens with your character, The Nameless One, awakening on a slab tended by a zombie, and covered in notes tattooed all over their body Momento-style. After playing through this introductory sequence, the Mortuary has become one of my favorite game locations of all time. 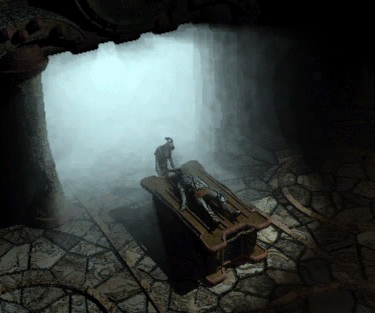 Shortly upon waking up, the Nameless One is greeted by Morte, a floating, sentient skull. Morte acts as sort of guide through the Mortuary and serves as the comic relief. He’s a perfect balance to the rather grim setting and a brilliant way to draw the player into the world of Planescape. Morte’s dialogue is sharply written and often hilarious, which elicited genuine laughs from me as we picked our way through the Mortuary.

The Mortuary itself is just as memorable. Simple design (just three circular floors) makes the area easy to explore as you acclimate to the game’s controls. The Mortuary also smartly exposes the player to many of the central mechanics of the game. It would be easy to wander the floors slaughtering every walking corpse you come across, but in true D&D fashion, exploration and experimentation are strongly encouraged.

A subtle hint from Morte at the start (in the form of an expressed desire to snag a hot date with one of the lady zombies) lets the player know that combat is not always the best option. Planescape rewards this observation by presenting the player with many fun conversations and bonus experience from speaking with the wandering corpses. It’s a smart way to familiarize players with an unusual world and the different paths it’s possible to take. The area design makes it easy to dive in.

Aside from the mechanical aspects, the Mortuary is also a fantastic story setting populated by memorable characters. There’s Dhall, the ambivalent scribe who seems impartial to the Nameless One’s plight and Ei-Vene, the tiefling surgeon who mistakes the player as  another walking corpse. There’s also Vaxis, a spy disguised as a zombie who speaks muffled sentences through the stitching in his mouth and the spirit of Deionarra, who serves as a mysterious hint to the overall story of Planescape.

I’ve played Planescape: Torment to the point of escaping from the Mortuary, but I am eager to jump back in and explore the mystery of the Nameless One. I recently began my first D&D adventure as DM and this game is giving me all sorts of inspiration. I just hope none of my group have played Planescape because the Mortuary might just be making an appearance . . .