Dungeons and Dragons is built on imagination. Without it, the game is nothing more than bunch of people sitting around a table listening to someone tell a story. And that’s boring. Unless that’s your thing, which is cool, but you might be more comfortable with an audio book instead, because D&D is very much an interactive experience. The synergy between the players and the Dungeon Master–and understanding that relationship–is at the core of every session.

It’s the DM’s job to present the players with a situation or situations, and it’s the players’ job to decide which situation to pursue and how to overcome it. Do they follow the shady rogue back to her shadow cult, or chase the rumors of the Goliath guarding a horde of treasure in the mountains? Do they head to the Underdark to stop drow warlocks from completing their rite, or do they listen to the bard’s plea to travel with them to his hometown?

This element of choice is critical to an engrossing and engaging experience. It’s what differentiates tabletop RPGs from video games; in the latter, players are limited by the boundaries placed on them by the developers, while in the former, players are limited only by their imaginations (or a stickler DM). Freedom is a defining feature that keeps the game from simply being a spectator sport.

It’s possible to give players too many choices, however. If a DM presents the players with too many plot threads, the whole story could unravel under the weight of analysis paralysis, the dreaded affliction that strikes those with poor decision-making skills. That’s where “railroading” comes in. 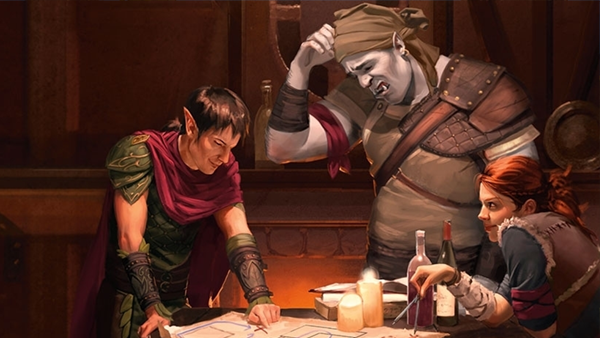 Rialroading is a term that usually carries a negative connotation. It occurs when a DM basically forces the party into a situation without much in the way of player influence. Think of it as a hallway filled with doors, but all the doors are locked and there’s only one direction to go. Railroading gets a lot of flack, and rightly so: what player wants to feel that they’re simply along for the ride, that they have no impact on their world? But there may be times when it becomes necessary for the Dungeon Master to speed things up a bit.

I am a young Dungeon Master, green and naive to the greater world of running a pen and paper RPG. Sure, I’ve consumed fantasy media all my life, including playing Dungeons and Dragons, but I’ve always steered clear of DMing; I’ve always struggled with anxiety, and the idea of running a game made me nervous. But I’ve always had ideas I felt were fun and ripe for a memorable adventure. And so, I held my nose and took the reins.

I’ll cite my own adventure as an example or railroading here. We don’t get the chance to play that often on account of all of us being adults with families and full time jobs, so we must make the most of those times we actually manage to get together. I’m on DM duties, but this is my first experience with leading an adventure so I may have gotten a bit over-ambitious with complicated maps and drawn out story beats.

Once we began the adventure, it became readily apparent to me that the players were going to spend far more time than I intended inside the first dungeon thanks to an over-complex and dense map that I spent several hours working out. We spent the first two sessions here, in this labyrinthine stasis, until I decided it was time to hop aboard the railroading train. I could sense weariness setting in, and the last thing I wanted was for the group to start dreading our sessions.

And so I disassembled the dungeon, one room at a time. Doors disappeared, hallways narrowed, enemies dissolved to nothingness. And the experience became more exiting. The party made it out, and was presented with a wide-open world rife with possibilities and potential story threads. The mood of the group had shifted as they found their way into light once again.

Railroading can take freedom away from the players, but it can also be a valuable tool for a newer Dungeon Master such as myself. I learned a great deal about Dungeons and Dragons in our first several sessions, and through the use of railroading I was able to get to a place where I felt comfortable as DM. I will employ it sparingly in the future, but for now, all aboard the train to adventure.

DM, DMing, Dungeons and Dragons, Tabletop, Wizards of the Coast