While Kelly Sue DeConnick and Valentine De Landro take time to regroup before the next arc of Bitch Planet‘s main series, we’ll be regularly presented with shorts from new writers and artists in this new Triple Feature series. All three of the stories in this issue are strong offerings, which is no surprise since it’s the first. I’m sure the series presenters wanted to come out swinging. 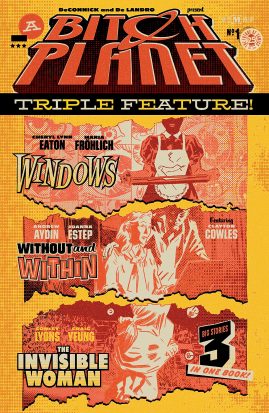 The first, “Windows,” provides the perspective of a woman trying to work within the confines of BP’s intensely patriarchal society, and examines how long she can go before giving in to the strain brought on by the small, inevitable betrayals an oppressed party faces when trying to work alongside their oppressors. The artwork mixes crisp, defined lines with light pastel colors – a nice mix of hard and soft.

The second story, “Without and Within,” is the one I liked the least, though that may well be because it hits so close to home that its imperfections loom large. It’s a brief political drama revolving around a young statesman’s televised speech and his new secretary’s sexual harassment at the hands of his colleague.

There’s something unreal about the panels dealing with the secretary’s harassment. The sequence of events is all too realistic, but because it happens so quickly (a detriment of this extra short form, perhaps), and because it’s presented so straight-forwardly, I fear readers who haven’t experienced this exact thing – and this exact thing happens in workrooms all across the country, every day – will easily write it off as an exaggeration relegated to a nebulous future dystopia. I need a dash of the absurd to underscore the reality of the situation, or I need the characters to be more relatable as humans. While I can appreciate the bluntness of showing the kind of sexual harassment that happens even now, the characterizations are too broad, and the anime art style doesn’t help to make them seem any less cartoonish.

Contrast that with the third offering, “The Invisible Woman,” which expertly hits the sweet spot between satire and incisive commentary. In it, a woman vying for a promotion at work struggles to unlock that perfect, impossible combination of physical upgrades that will finally earn her respect from her peers. Her boss suggests that her being “bigger up top” would help her chances at winning the promotion. Her naive interpretation of his comment to be in reference to her hairstyle is truly sharp humor – so funny it hurts.

As ever, the back matter is solid gold, which has been true for every issue of Bitch Planet so far. Tasha Fierce’s essay, “The Raised Hand of Darkness: Considering Violence as a Method of Non-Compliance,” is worth the price of the issue alone. I hope DeConnick considers gathering all the back matter essays into one volume at some point. It would be a welcome addition to my shelves and I could easily see it being used as a text in college courses.

I’m a sucker for anthologies, even if, as DeConnick writes in her notes in the back of the issue, they can be a risky venture. While it’s true that shorts collections can often be creatively uneven, and there’s no hook to keep readers returning month after month, I like seeing varying perspectives on an already-established world, and how each of them adds depth and breadth to the main storyline. Plus, if I don’t like one story I know there’s another a few page-turns away.

Nancy Drew and the Hardy Boys: The Big Lie #4 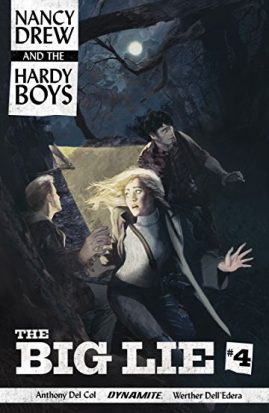 Has anyone figured out what The Big Lie is yet? Who holds the darkest secret in Bayport? Whatever and whoever it is, I’m sure it will uproot apple trees and knock down white picket fences all over New England.

Fenton Hardy is still dead. Is it suicide or murder most foul? Nancy Drew (our narrator) is sure it’s murder, but she’s still keeping secrets from Frank and Joe Hardy and I’m stumped for what cards she’s still holding. Maybe it’s Drew who knows The Big Lie.

Details are dribbling out as the series progresses. The Rover family is indeed up to worse than gambling (smuggling drugs inside computer hard drives!) Sam, baby loc of the Rover family, assures Drew and the Hardys that neither he nor his brothers had anything to do with poppa Hardy’s death. Instead, he casts some shade on the unknown suppliers the Rovers use. Do we believe the fledgling thug?

This issue shows the growing, albeit reluctant alliance between the Drew/Hardy axis and the Rover clan. I’m still not clear on why the Rovers are taking our heroes under their wings; even if the Rovers are innocent of Fenton Hardy’s death, why would they let the town goodie-goodies know the inner workings of their syndicate? And speaking of criminal activity, Drew finds time for a brief aside on the history of illegal doings in Bayport. It’s a sordid tale (underground tunnels used during Prohibition!)

Regardless, the Rovers lead the field trip to their next drug pick up. Things seem fishy to our intrepid amateur sleuths, but they want answers (no, they need them!) Then something goes wrong. The suppliers aren’t waiting for our gang; it’s the cops. Luckily, everyone escapes the long arm of the law, but the Rovers are surprised the cops are after them, not with them.

Oh, and more intrigue: Sam may be a rat, but we’ll never know, since he gets got.

Writer Anthony Del Col is keeping this story tight and twisty, and pulls off cliff hangers with aplomb, keeping readers guessing “whodunit?” He has a good grasp of noir-esque hard-boiled language and thankfully has toned down the use of bad puns. The Hardys get some added dimension, competing for Drew’s attention (in a cute high school-ish way.) Things almost take a turn for the sexual (please no) when one of the Rovers tells the Hardys he’s going to put the moves on Drew. That slime ball!

Werther Dell’Edera’s art shows a good understanding of noir cinematography in the angles he uses and in his scene cuts. He lights scenes just right and takes advantage of the cover of night that most of issue #4 is under.

We’re close to the end of the spider-webby, pulpy tale that is The Big Lie. There are only two more issues before everything wraps up, and I don’t know where Bayport and it’s citizens can go after this. I’m sure there are more tales to be told in the world of Nancy Drew and the Hardy Boys but when the titular lie is told, can our heroes stay friends? The pot boils…

Who the hell is Black Bolt? 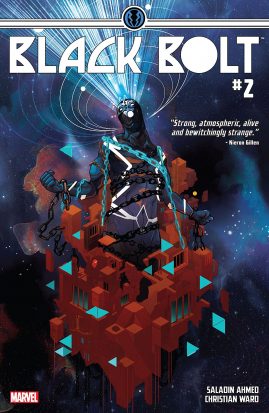 I’m entirely new to the character, his motivations, and his history. Thus, Saladin Ahmed’s second issue comes as something of an enigmatic enigma. If you’ve followed any of my LWC contributions you’ll know that I love low dialogue, pacey pieces. Nothing gets me interested than an onion’s worth of layers to pull away.

Accordingly, Black Bolt himself emerges as a perfect riddle. A man full of thoughts who hardly speaks and thinks purely in images. Though others around him can’t help themselves from jawing off, Black Bolt himself keeps quiet. He’s used to his words shattering worlds, or something. Now, he watches and waits.

When he does speak it’s either as a command or a whisper. He doesn’t trust his own voice. A mysterious man locked in a strange prison of mysteries full of strangers might not. Thus, when Black Bolt speaks, I listen.

This time, however, listening happens with the eyes. Fortunately for me, I love stark panels with minimal actions. Christian Ward’s art reminds me more than a little of the work that Jordie Bellaire and Declan Shalvey. Panels drift between stark facial expressions to loose, water color interpretations of those figures.

Ahmed does well to pull back here. No real words need to be said or read. There’s no grunting or signs of exertion, a keen reader will read those in anyway when drawn correctly. The action is fast and brutal, really only taking up about 20 panels across 3 pages. Each panel tells a story, the backgrounds blend and swirl as characters speed towards one another. The eye is pulled in tight to specific moments such as Black Bolt almost losing a cheek.

In many ways, there’s no restraint here at all. Two characters really go at it, they even break through the panel walls. However, the stark, minimalist quality of the scene works beautifully in keeping Black Bolt the man and the book one of few words. Its eye catching and it has to be me. The images have to tell the story because Black Bolt won’t.

Another beautiful element of this comes late in the issue when Black Bolt is consumed by thought. Behind him the prison dissolves into his memories. Obviously these people being depicted must loom large in his mind, they’ve taken over the page, bleeding into other panels and consuming the environment. Astute readers might know who these people are but for a newcomer like myself its refreshing to have to parse out the details.

Consider how last week this comic is you can see what an infrequent reader I am. But that’s okay. It’s not hard to begin again and get immersed in a slow, wordless steep.