Magnus #1 is a comic book that I went into with low expectations that were rapidly erased by halfway through the issue. This is smart science fiction that introduces us to the re imagined world of a comic series that once featured a guy in a chainmail miniskirt karate chopping through armies of automatons and retro wacky-looking robots. This series has elements of that, but only time will tell if our Dr. Magnus will go all Old Boy on a bunch of rebelling bots. For now, it seems like she just wants to help them will their programming glitches. It’s not until the end of the issue that we’re reminded that yes, she’s also a robot bounty hunter. 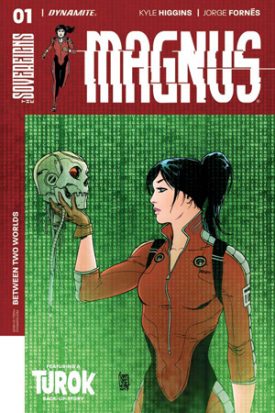 There are some great genre choices in this issue. While the book has strong noir overtones there are also elements of horror and science fiction. The art by Jorge Fornes effectively communicates the disorientation of Magnus’s world, from our reality to “The Cloud”, which serves as a safe haven for the robots enslaved by humanity to upload to and enjoy themselves, where they see themselves as humans living out there lives. Also the way he draws the opening murder sequence is downright chilling.

Some of the ideas explored in this opening issue include depression, the classic notion of “what makes us human?”, and the nature of class and human ignorance in the face of suffering. Why bother building a body for your computer with massively advanced A.I. to travel around in? Because you have money and you can. I’m not 100% sure what the nature of Dr. Magnus’s robo kitty is for instance, but one can only hope its quality of life is ok in what looks like to be either a feline Iron Man suit or what may be a cat cyborg, or catborg, a term that I just made up. With the exception of Dr. Magnus this is a world where humans have become cold and unfeeling, and the robots strive for warmth and happiness. Humans have the technology to make robots and catborgs, but what about the happiness and quality of life of those robots and catborgs?

It will be interesting to see where this goes, and I hope that Kyle Higgins continues exploring these heady SF concepts, amidst some Dr. Magnus Blade Runner-like-action. It reminds me of Tom King and Gabriel Hernandez Walta’s excellent The Vision, a 12-issue genre-skipping miniseries from Marvel that I highly recommend. The story of the Avengers resident android also delved deep into the nature of advanced A.I., and at what point does it cross over from artificial to pure humanity, and rapidly devolves into insanity. Where should science stop? By making our lives seemingly easier we create more problems, and make life worse for others. Those problems tend to be in the form of killer A.I. and robots. Better sign up for that Robot Insurance when it becomes available!

Note: Having missed the first two parts of the Turok back up story in this issue I can’t really give an adequate review, other than it looks to also be an interesting take on the character, almost as if the Punisher visited The Savage Land, or the 90’s ABC show Dinosaurs.

Moirai Will Paralyse You With Indecision