The Mummy is a garbage movie.

There was going to be a different first line, one that made a joke about unwrapping this pile of wasted celluloid like a roll of toilet paper. Maybe a quick aside about how it is a “monstrous” mess, a nod to this, the supposed start of the Dark Universe shared universe of Universal monsters. But at the end of the day I, like the directors and performers and producers of The Mummy, couldn’t be bothered.

The Mummy is a garbage movie.

The mythos starts with Ahmanet (Sofia Boutella), an Egyptian princess passed over for rule by her infant brother, making a pact with an ancient and powerful deity and then becoming possessed and tattooed. She is thwarted and mummified alive. This is the second or third time hop of the movie (though the first moment chronologically), which also featured scenes of England in 1127 AD, an unknown time in roughly the present day where Russell Crowe is a doctor/lawyer, and then to ancient Egypt to talk patricide with a long dead Egyptian woman.

Live mummification as a punishment, you’ll be happy to know, was not an actual practice in Ancient Egypt. In a comic adventure film like 1999’s Mummy (the Brendan Fraiser one), live mummification was more forgivable because most of the myths were made up (Hamunaptra is a stand in for any El Dorado like city, etc), the movie was a take on the old Hollywood adventure classics, and the movie didn’t commit the sin of taking itself far too seriously. 2017’s Mummy film takes itself, and its lead character, seriously. It also will not let the concept of live mummification go. It happens twice in the interminable runtime. This movie drapes itself in a broken and poorly articulated version of Egyptian myth as if heard through a game of telephone. But like a gritty game of telephone where people become zombies and stab each other during intercourse. With its self serious vibe, you’d be forgiven for thinking that maybe this blatant misuse and misunderstanding of an actual culture might be racist.

Take Set, the Egyptian God of Death, broken down in this film as basically the Judeo-Christian Devil. Except he’s not. There’s a lot of duality to ancient myths where figures that represent a certain attribute are then seen also as guardians of its purpose. Set is the God of Death (and violence and deserts and chaos), and at conflict with other parts of the Egyptian pantheon, but he is a necessary force. He’s a trickster, but he’s also responsible for keeping chaos from attacking the sun god Ra. There was also that one time that Set went about unmanning his chief rival by having sex with him and then accidentally eating his semen on lettuce, but I digress. The foundation of mummies (and Egyptian culture and mythology) as a horror trope in Western media is based on a misunderstanding and colonial mindset towards the burial practices of another culture. Mummification isn’t simply wrapping someone in gauze and entombing them, just like Set isn’t just an evil dude. Turning aspects of Egyptian culture into bog standard action fare is a waste. Much like the rest of this film.

This is the part in the review where you may stop yourself and go “wait, but what happens in The Mummy?” But truthfully I’d rather spend pages going through myth than spend a significant amount of time talking about that garbage movie. Nevertheless, here’s more about the first Dark Universe extended universe film, which you should not see.

The Mummy is a barely articulate vanity project wherein the watcher is given the Herculean task of believing that Tom Cruise is so irresistible to all women that one, waking up after 5000 years, would instantly ping upon him as being so desirable she would wreck the planet to have his sweet, sweet love. She must grant him immortality so that she can have a King to rule at her side (it’s never articulated why, but more on that later). This is the central point on which the plot hangs limply, like a crows wing pinned to the wall. Any goodwill the movie gathers from occasionally neat visuals or a good one liner is immediately dispelled by having to watch Tom Cruise and his wooden costar Annabelle Wallis pretend to be in love.

This is easily the worst performance in Tom Cruise’s career. To say he was miscast in this role is an understatement. He is easily too old (Cruise turns 55 this year) and he does not have the comedic timing for the part. Charlie Hunnam who is practically a blank slate, would have given this role more personality or at least have been more competent in his performance. Cruise’s line delivery barely manages simple credulity, his chemistry with his romantic counterpart nonexistent. Frequent banter between the two of them feels like a first line read rather than professional performers. Every moment that they are on screen is torturous, but not literally as tortuous as the live embalming with liquid mercury that takes place midway through the film by the alleged good guys. Cruise isn’t alone in giving out excruciatingly mediocre takes, as his romantic partner Annabelle Wallis is a blonde stand in for every action film woman. This isn’t the worst performance in her career because she was once in the horror film Annabelle doing her best impression of January Jones on Valium. A day after seeing this movie, I cannot recall anything about her personality or character beyond “is an archaeologist,” which is the same thing I can say about the lead antagonist in the 1986 Indonesian action film Lady Terminator, a movie I wish I had seen instead.

This might be a good time to point out that the women in this movie exist to prop up Tom Cruise. This includes the Mummy. Somehow, in a universe where Dr. Jekyll and vampires and Ancient Egyptian gods come to life, Tom Cruise has positioned himself as the most important person in the Universe. The Mummy, who has just woken up from a 5000 year old curse and is now searching for her “chosen one” sees him and is like “oh well guess I don’t need to look ANY further.” The thirstiest of women doesn’t come out of a 5000 year dry spell and jump the actual first man she sees. I mean maybe for a quick, Lifeforce-esque romp in the hay in which she kisses him to suck out his soul and turn him into a zombie (this is one of the two ways zombies are created in the Mummy), but not for forever. Tom Cruise should at most be a rebound soul-sucking, not a committed giftee of immortality. Why does she need to have a chosen one anyway? This woman, who murdered her entire family so she could be queen, needs a king. In a flashback, shown approximately six times, we are shown the previous Chosen One, a character we’re led to believe was her lover that she wished to grant immortality to. In keeping with this, she now wants to force this uninterested stranger (played by Tom Cruise) to become her lover. Forever. 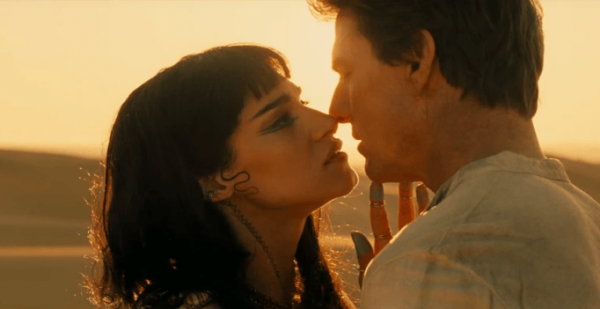 This movie has no idea what the plot is, or who the real villain is. It isn’t necessarily that Ahmanet is portrayed as a sympathetic villain, but simply that her motivations aren’t really explained at all. She wants to rule the world, I guess. She kills her dad and a baby. But dynastic succession historically has been a bloody affair and when she says “it was a different time,” well she’s not wrong. Much of her screen time is spent with Sofia Boutella showcasing a frankly stellar display of physical acting (when she isn’t CG), her movement eerie and fluid. She’s a great presence for a Mummy if she was given any material to work with at all other than “is weirdly into Tom Cruise.” Does she want to take over the world? As is the case throughout the film, it is directly explained to the audience that she does. But we’re given no giant blue death laser in the sky, no large trial for the protagonists to overcome. Her pursuit seems singularly focused on retrieving Tom Cruise.

The dialogue is positioned to have her at the helm of a destructive force against all life on Earth even though her actions are not. It feels as though we have two scripts at work, and the one that was selected put the lead character as the the most pivotal and important object and person not just in this movie, but perhaps in the rest of the series to come, relegating what should have been the primary antagonist (the titular Mummy) into a side role as an overly attached ex-girlfriend figure. By the end, after you’ve seen her mummified alive (twice) and seen her lover murdered once, her defeat feels hollow and mean. She’s stricken down, curled into a fetal position on the floor (her life force drained and passed along to discount January Jones) and later bathed in mercury. Small, defeated and husk-like she looks like the corpse of a burned child asleep in their bed.

This movie, as it exists, is garbage. It’s incoherent, paced poorly, color graded to the same monotone hue of grey brown as a mud puddle. It functions as a trailer for a extended cinematic universe that both doesn’t make sense and shouldn’t exist. At best, the Dark Universe would culminate in another League of Extraordinary Gentlemen film and to be honest no one wants to see that. At the end of this movie, we’re left with our antagonist (one of the monsters allegedly featured in this shared universe) shuffled away and the most inept character in the film alive and running around and maybe also a mummy. It’s not very clear. The only thing that is, is that this should be the last in this franchise.