Broforce only has one mission: to revel in the joy of unadulterated violence. Draped in overt themes of American patriotism and colonization, the videogame is about a congregation of action heroes—the likes of Rambo, RoboCop, Indiana Jones and even Cherry Darling (Planet Terror)—mowing through waves of enemies and liberating countries from presumed tyranny. As a testosterone-laden voice roared at players to get to slaughtering, rifle-toting terrorists and suicide bombers are stabbed, eviscerated, detonated and bombarded with bullets.

To say that Broforce is lacking in any subtlety is probably an understatement.

Mechanically, Broforce really is loads of fun. Each playable character has his or her own style when committing rampant homicide, and the fact players can’t choose their favorite hero keeps the run unpredictable and thrilling. So while Rambo is adept with shooting at insurgents from afar, he does significantly less damage than Agent J from Men in Black, who metes out incredible damage at the cost of heavy recoil. Plus, the abundance of bombs and flammable canisters means explosions are aplenty, environments are easily destructible, and lives all the more dispensable. Throw in a second, third or a fourth player, and watch the country you’re liberating crumble apart in mere seconds. 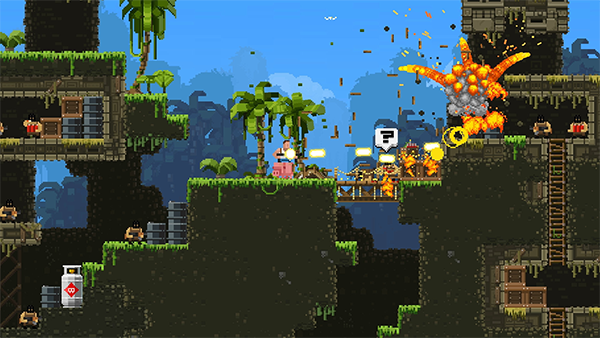 But for all that gleeful, anarchistic fascination with destruction, the game does seem to hint at a sardonic message underneath that bombast. Your muscle-bound commander introduces each level with preposterous—yet familiar—excuses for America’s invasion into these lands. In one country, unconfirmed reports of Weapons of Mass Destruction necessitates a preemptive strike. And for another, the natives don’t seem American enough, so the crew is just trying to assimilate them and promoting the ‘Murican way of life—with the help of guns, of course. One level even has locals asking for weapons, and supplying them with some will cause them to haphazardly attack your enemies. However, their obvious lack of bulging biceps, square jaws and massive chests means that this is for naught; they die almost instantaneously. And it’s the American army to the rescue once more!

It’s clear that Broforce is trying to wear two hats; on one hand, it attempts a wry commentary on the American military-industrial complex, while also pining for the days where games were just “games”, when explosions and shootouts and the pure joy of destroying pixels held no inherent meaning other than being “fun”.  However, these two views are ultimately contradictory. The latter can be seen from how there is no reproach on the collateral damage that the heroes have wrought through their pointless violence. Every level concludes with the heroes jetting off to the next destination in a helicopter (and dangling on a rope ladder, of course), leaving the country blazing in a sea of explosion and flames—all while a gratuitous guitar solo plays. Contrast this to the equally violent but much more thoughtful Hotline Miami, in which the player is forced to survey the consequence of their murder spree in cold, stark silence.

Sure, the game falls apart thematically, but killing foreigners in the name of nationalism, with the help of the most iconic action heroes of our generation, is undeniably fun. Here’s the thing though: I’m not saying Broforce is a poorly-made game. I’m just saying that it’s an imperceptive one.

A Normal Lost Phone: A Coming-of-Age Tale For the Digital Age
Previous Post