There is nothing in Bungo Stray Dogs’ second volume to stir discussion or curiosity. All the flaws that marked the first are on display here: the characters still do little to justify their literary naming conventions, the setting is still the undefined mishmash it was in the first volume, the conflict between the mafia and detective agency remains as uninspired and as rote in its execution as before, the art remains as uninspired as the story.

Atsushi is still uncertain about his self-worth. The mafia is still desperate to nab him for the bounty on his head and so send a special unit know as the Black Lizard squad to storm the detective agency’s offices and, later, another cell to bomb a train Atsushi is riding on, but these episodes pass without interesting incident. Little effort is required to dispatch the villains, so little you can’t help but wonder why they were introduced at all or how the mafia has made such a run of this city if their foils can whip them without significant effort.

These little episodes serve almost entirely to introduce Edogawa and Yosano, but how can one care when the powers and personalities they’ve been assigned are so cliché? The former is just the invincible genius detective epitomized by characters like Benedict Cumberbatch’s interpretation of Sherlock Holmes or Death Note’s L, the latter a stony older-sister type who hides a horrifying violent streak that is played for jokes about sadism so tired they were not even funny when they were in vogue two decades ago. There is not a single original idea at work in these characters, though maybe this isn’t surprising: there is not a single original idea at work anywhere in Bungo Stray Dogs. It is an artistic vacuum of the highest order, so uninspired that the greatest challenge when critiquing it is finding ways to describe nothing. 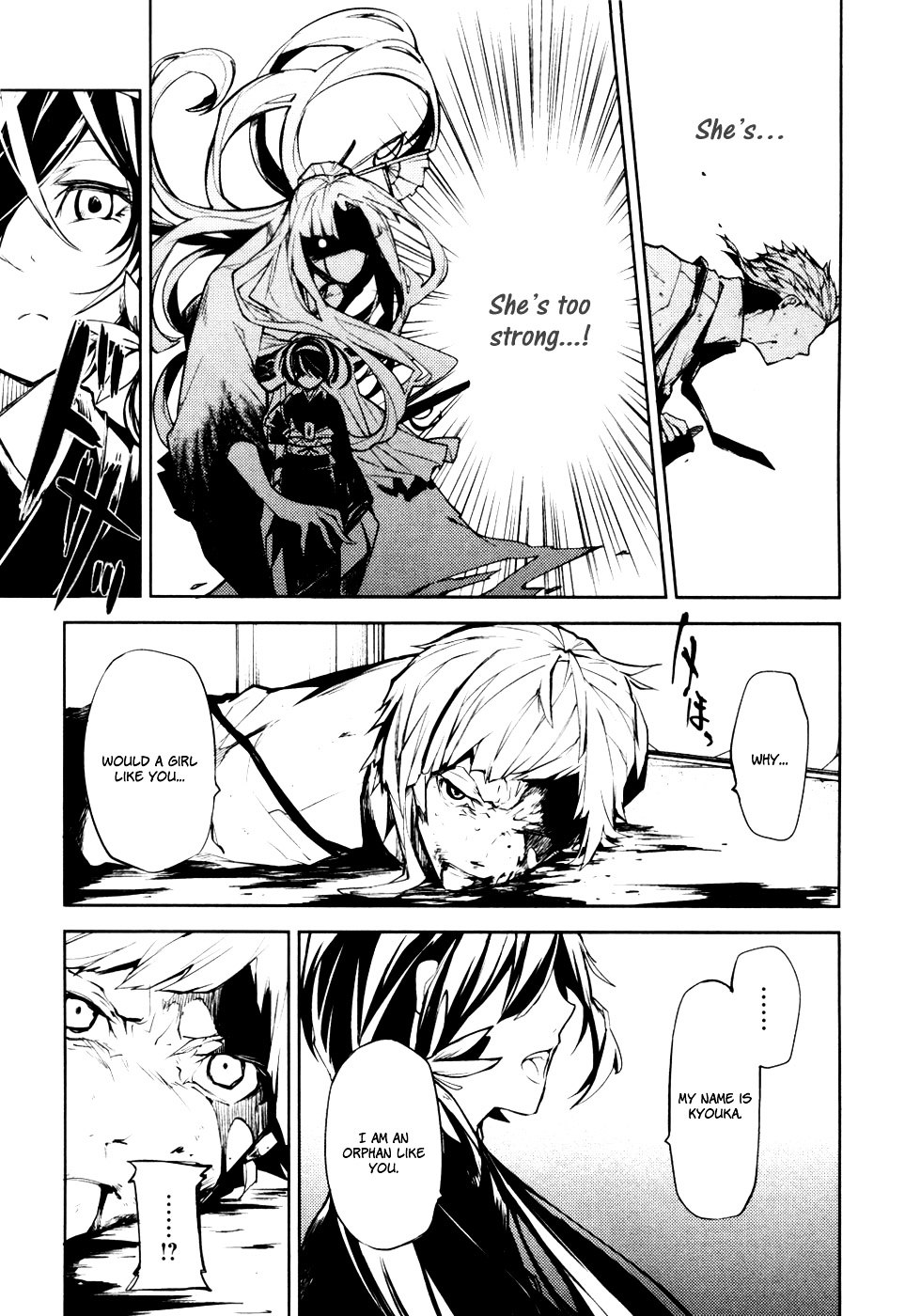 One can puzzle after why, exactly, Asagiri would stake his claim to fame on a property this dull, but a look at a note in the first volume suggests it was almost entirely his editor’s idea. One could spend as much time pondering what there is in this series that has drummed up such a fervent fan response online, which seems a slightly more fruitful tack to take. Is the core appeal in fact that there is nothing to offend the palates of readers in these narrative and comedic forumlae so warmed-over that they’ve lost all smell and taste? Have they gotten so tired of art that challenges them in any way that they’ll gladly glomp onto something that demands no investment? That can’t be entirely right, though, when even the most idiotic and market-driven product often possess a soul, warped though it may be. Condemn Mark Millar for writing the same stupid juvenile, misanthropic power-fantasies disguised as satire that actually insidiously embrace the very things they seem to lampoon, but at least acknowledge that they convey a vision of the world. Write off Attack on Titan for its wretched art and nearly incoherent rage – far be it from me to disagree – but at least acknowledge that it exists to say something about Hajime Isayam’s own impotence and alienation. Their appeal rests on exactly this, and so it is understandable they have received popular acclaim at a time when globalization and monolothic institutions have left people feeling more estranged from even their own decisions than ever before. They may be more merchandise than art, but they at least have identities. They at least have a point. 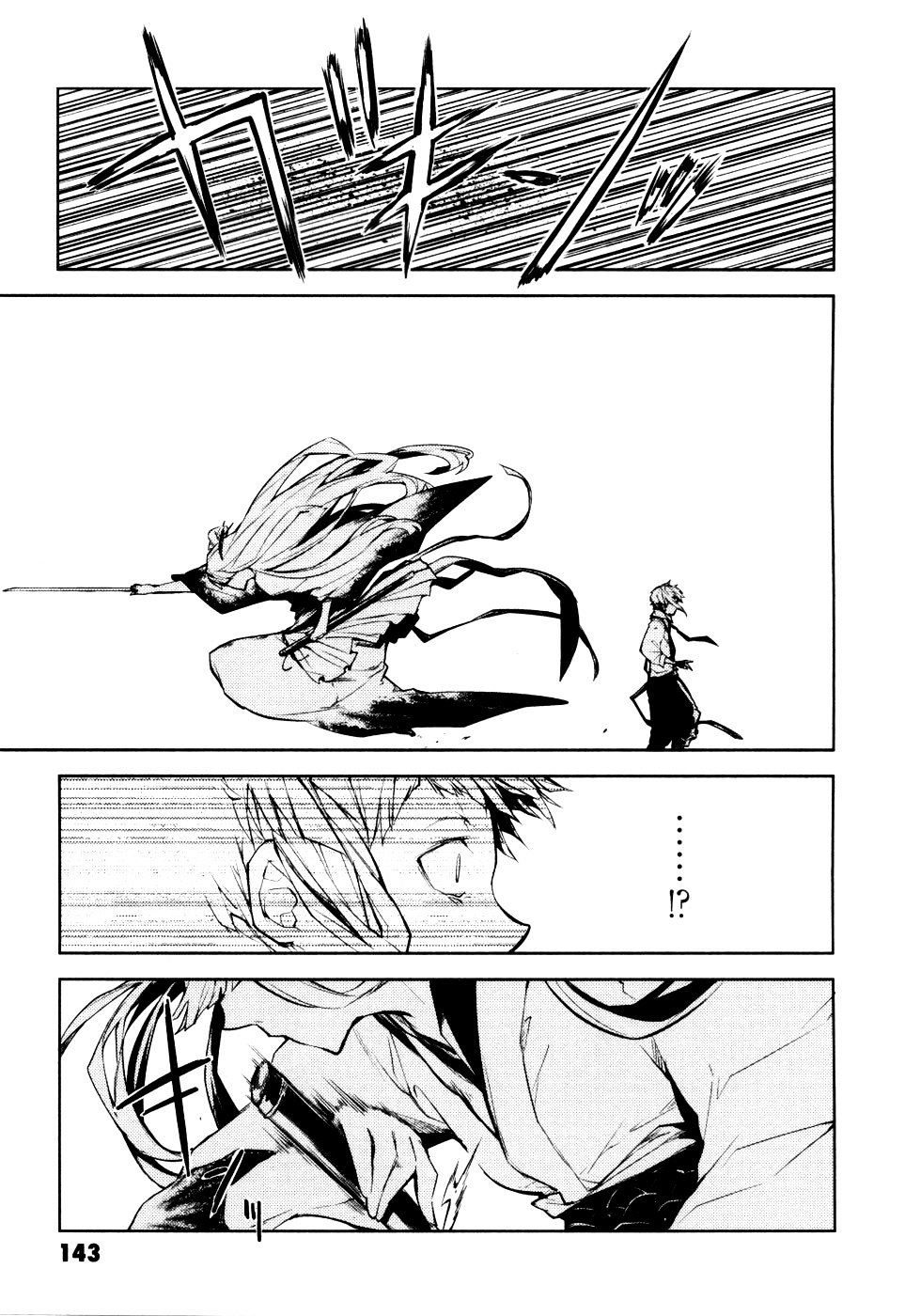 Bungo Stray Dogs does not rise to even these abyssal lows. If there is a hint of worldview or personality hiding in these pages, it is lost deep in the gutters that separate every dully penciled panel. I’ve been told that Asagiri’s strengths announce themselves later as he turns his eye on Osamu Dazai’s backstory and his character, but it seems more likely that regular readers of the series are so desperate for drama and art that, like the starving man who mistakes a single grain of rice for a feast in his delusions, they confuse even the barest evidence of insight for a deep investigation into the human condition. When pushed, they have to recognize that a narrative this insubstantial cannot sustain interest forever. And then have to wonder where, exactly, such a thing could crawl out from.

I am not certain I will stick around long enough to figure that out, though. My normal policy is to see every series I read through until its end just in case it grows, and the question of exactly how something as empty as Bungo Stray Dogs could exist is fascinating in theory, but in practice, it is draining. It’s often said that a work fails to impress readers because they do not bring enough of themselves to the exchange, but even the most generous of audiences is unlikely to find Bungo Stray Dogs willing to return their investment. A void can’t very well hand anything back. It can only keep taking and taking to no end.