The following is an excerpt from Unwinnable Monthly Eighty-Nine. If you enjoy what you read, please consider purchasing the issue or subscribing. 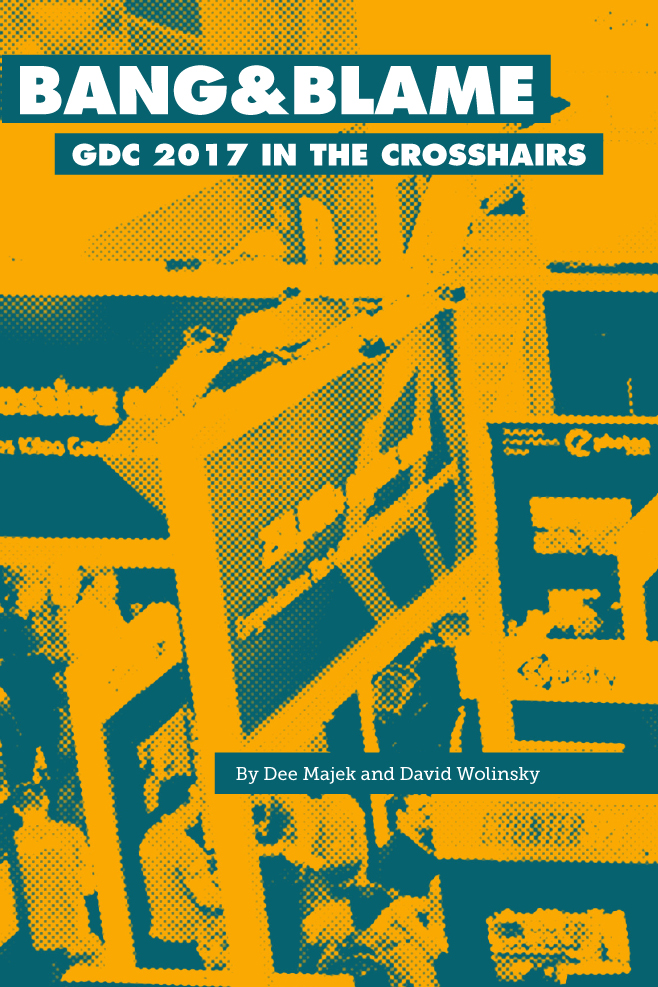 It’s ridiculous to imply that any single byline’s experience at a five-day conference stands on a pedestal as the authoritative word on what happened. It’s down to the individual, how much socializing energizes them, their goals in coming, whether they like pitching themselves to countless strangers, what’s in their bank account, and how badly they’re affected by alcohol and the local allergens. That said, if you come in with a shitty attitude, guess what: You’re gonna have a shitty time.

And yet it’s a time-honored tradition for a disenfranchised young blood writer to, say, come to E3 in the summer and write a hand-wringing diatribe conflating downtown Los Angeles near the convention center with the “hellish state of the industry.” It’s more nuanced than that, and often a burnout doesn’t tell you they’re a burnout – they think they’re just reporting the facts and the final word and wonder why their words don’t make everything explode.

But E3 and GDC have never existed for a writer’s critique. There’s a reason they call it the Game Developer’s Conference.

This year marks David Wolinsky of Don’t Die’s first decade attending GDC in San Francisco. He has no intention of ever working for a videogame company. Dee Majek, Don’t Die’s web development intern and a recent recipient of a master of arts from Stockholm University, has never attended GDC. She wants to work in the game industry but doesn’t see swinging a trip to GDC anytime soon. They still had plenty to talk about.

“The fact that videogames are cool weirds me out.”

DAVID: I regret leading with this through line because it casts a negative light on the week right out of the gate, but thinking back after a weekend filled blissfully with naps, takeout and Simpsons reruns, I still feel it’s true: If there’s any one thing game developers talked to me about more than anything else, it’s blame. Why it’s someone else’s fault they aren’t more successful. Why certain developers being as popular as they are is “ruining” people’s tastes and curiosities for different type of games. How “indie celebrity” greed and self-interest lets fewer people at the table, period. How the media wrote too much about their game. How the media didn’t write about their game at all. How the media wrote a lot about their game but it didn’t translate into sales. How the media didn’t write nearly enough about their game. The mouthfeel of the week was assigning responsibility – which is to say that a conference is a popular place to blow off steam and bond with others who also share your problems.

But a decade attending a conference means you have a sense of what’s this year’s most popular complaint versus concerns with more weight, depth and repression. GDC has increasingly felt strange to me because there’s an eagerness not only to sell but also to sell as quickly as possible. Of course, none of the true movers and shakers dispense the most meaningful wisdom from behind a podium. The actual career-changing meetings don’t take place in public. If nothing else, GDC reliably is a place where you can buy books that are out far too early (like at least six books on best practices for VR development available in the bookstore), hear about victories that are being declared far too early (like industry analysts insisting VR is here to stay only because stores are stocking the hardware), feel totally turned off IRL by that person whose work you liked from the internet but turned out to be totally standoffish when you met, maybe make a friend, or find whatever Kool-Aid you’re thirsting for. Oh, and there’s the talks, which generally cycle through the same pool of information every five years. Tarn Adams, of Dwarf Fortress fame, mused aloud to me before the first day of GDC was over, “Man, I got into games because I didn’t want to have to deal with corporate bullshit.”

My first GDC, I remember the conference seeming magical. It was a symposium where obscure developers – like Cactus – would have a captive audience, diving deep into esoteric design philosophies and attitudes about creating art. (Then again, who outside of Miyamoto is even close to being a household name?) This year, there was “How to Survive and Thrive on No Budget (Presented by Amazon).” There was a talk I attended about how they create characters for League of Legends prefaced that they “were not going to discuss their creative process.” Out on the showroom floor, the Independent Games Festival exhibitors – an entity created to “assist and inspire innovation” – were stationed next to the Global Licensing Group. It’s hard to argue there’s much of a difference between either booth. 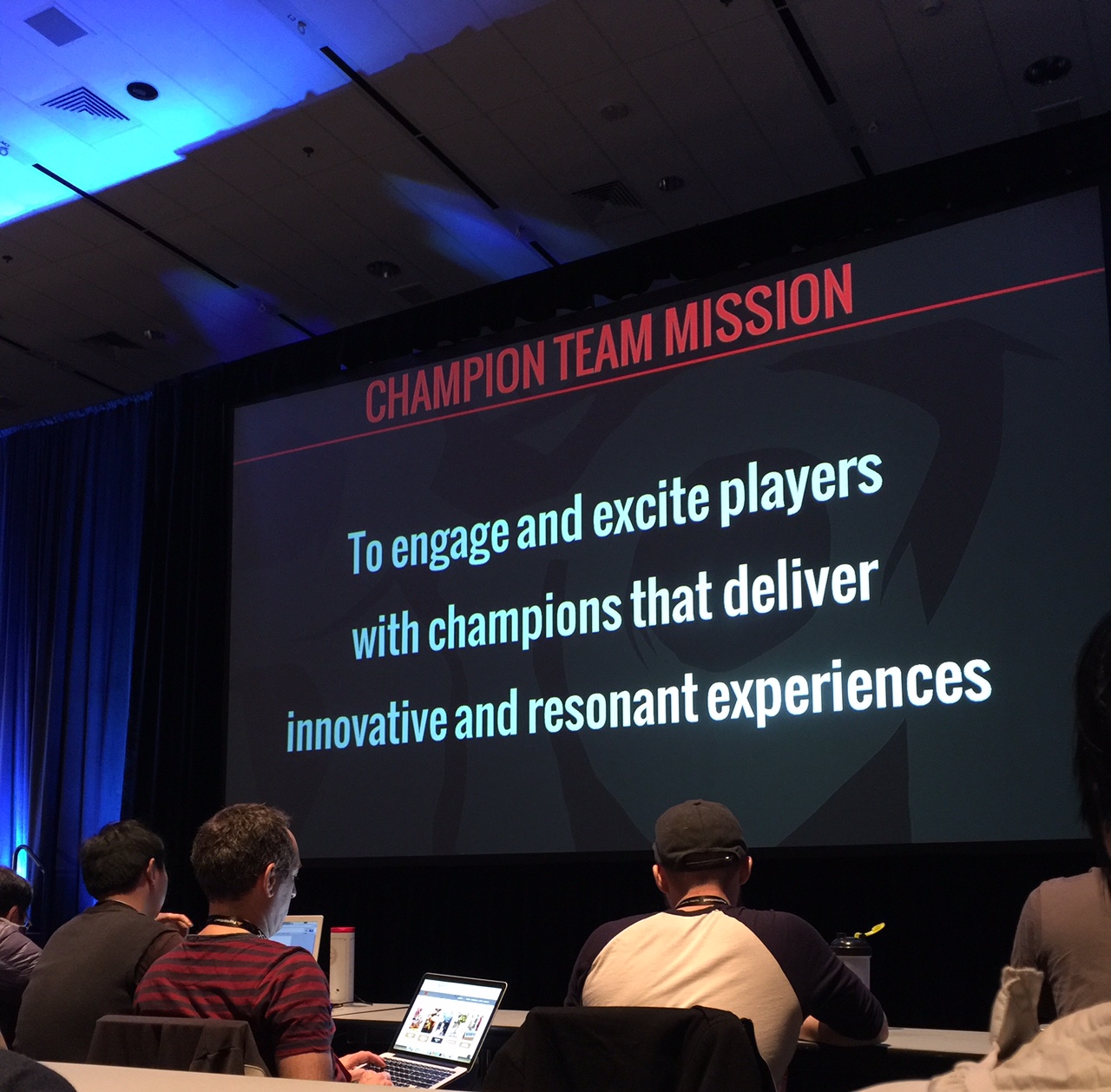 Even among the supposed bleeding edge of creativity on display, there’s a noticeable trend and conservativeness to what the IGF deems worth elevating: Nothing too weird, no Twine games, and nothing that doesn’t remind you of something you’ve already played and bought before.

I guess this might be a good a place as any to toss it over to you, Dee, but what do you make of GDC? What opportunities do you think you’re missing out on by not being able to attend? What do you wonder about most?

DEE: I can’t really lambast GDC, as fun as that might be to read. There are lots of talks I would love to be able to attend as a game design grad student and a wannabe, and that I wasn’t able to attend for the same reasons. That’s a subtle way of saying I’m broke at the moment, by the way. I know I eagerly spammed you with a bunch of sessions I wanted to sit in on, like “DOOM: Behind the Music,” the Game Writers’ Roundtable, or “Creating Complex AI Behavior in ‘Stellaris’ Through Data Driven Design.” Or “Everything I Said Was Wrong: Why Indie Is Different Now,” or inXile’s “Everything’s on Fire and No One Knows What to Do,” which boasts what might be the most astute talk title I’ve ever seen. Wait, I’m not being sarcastic. It’s true!

In lieu of attending, I’ve been digging around on reports and articles written on this year’s talks, and watching session uploads as they appear. Speaking from experience with external coverage as well as uploads of the conference’s presentations in previous years, sometimes it feels like GDC is, as time goes on, skirting more and more into corporate circle-jerk territory. Lots of vague talks from AAA about “here’s a problem, here’s how we solved it, be like us, we’re so great” – but the information given on both the problem and solution is pretty superficial. You mentioned the talk “How to Survive and Thrive on No Budget (Presented by Amazon).” It’s hysterical. Megacorp cares about you!

Turns out, the talk was about sustainable market strategies and product positioning, using airlines as examples of business practices that games should learn from.

Tarn Adam’s quote really hits home for me. Take the talk “Strategic Design Or: Why Dark Souls is the Ikea of Games” from this year. I was pretty much watering at the mouth when I read that headline before the conference. FromSoftware’s Souls series and Bloodborne are right up there at the top for me, for a lot of us in regards to interconnected design and player agency in narrative. Just remarkable level and area design that tells stories in a nonlinear fashion, stories that the player has to cobble together through exploration, through careful observation and attentiveness to detail. The way those same qualities are emphasized in combat design – again, success there demanding observation of attack patterns, attention to animations, to placement, to terrain. I could go on. I assumed, Business and Marketing tag on the scheduler notwithstanding, this was what the reference to Ikea would be getting at. The player as an active participant in putting narrative together, rather than sitting and watching some cutscenes interrupting actual gameplay.

Turns out, the talk was almost exclusively about (purported) sustainable market strategies and product positioning, using airlines as examples of business practices that games should learn from. I mean, I’m sure that’s valuable to parts of the game industry. I’m not saying it isn’t. But it isn’t exactly deep mining design or development.

Don’t get me wrong, I’d rather attend GDC talks than cry into my ramen noodles at 3 a.m., but sometimes it can feel like in the necessity of promoting one’s studio, of being “professional,” of portraying the workplace in a positive light, maintaining brand image, etcetera, etcetera, the talks can end up feeling a bit eviscerated, or soulless. Kind of like it’s a bunch of streamlined algorithms talking about how to put Emotion™ and Diversity™ or whatever into game narrative. Like it’s not an actual person giving you a talk.

And yeah, I realize games are big business. Of course. But since GDC is aimed more at other developers than the public, does it feel like the talks are opening a dialogue? And I don’t mean necessarily about the Great Problems affecting society or anything. Even just about RNG, or aspects of AI coding, or art direction? The more niche development talks might be more inviting for discussion, at least among area experts. I mean, obviously game companies can’t leak info to competitors. But is there room for discussion? Or is everything company™ trademarked™ immaterial™ property™? (Sorry, I’ll stop using that joke now.)

You’ve been reading an excerpt from Unwinnable Monthly Issue 01789.

Bad Games Are Good For No One