The third volume of Bungo Stray Dogs ended with the promise of better things. Series creator Kafka Asagiri finally seemed ready to move beyond the the port mafia and the Armed Detective Agency’s tired conflict and on to a more interesting battle centering his universe’s nefarious interpretation of American literary figures such as F. Scott Fitzgerald. And just as the author seemed ready story seemed ready to dispatch these provincial concerns and the tired structure of introducing the various members of the agency one-by-one in cases designed to show off their abilities against dull mooks, so too had Atsushi dispatched his rivals Akutagawa in a messy but ultimately emotionally fulfilling battle that saw him transcend the feelings of inadequacy that had defined him for so long. 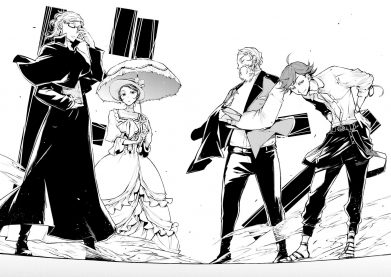 It wasn’t a perfect enough ending to salvage a deeply imperfect arc, no, but the uptick in quality and strong sense of new directions suggested, as I said in closing my last review, that Asagiri had discovered a purpose for writing, a passion for this story that would see him, it and readers through to realms more thrilling. With Atsuchi’s personal demons sidelined and the vanilla initial villains defeated, it seemed that there was finally room for other established members of the detective agency a chance to play the part of something more than cameos in their own story, a chance to strut their unique abilities against worthier, more interesting foes. Every element seemed to suggest an opening up of horizons, of a generally more expansive new story, and one couldn’t help but feel that was representative of Asagari’s own excitement about the future.

The truth – disappointing but ultimately predictable – is that if Asagairi was ever excited about this future it could not have been for long. For no sooner does he have the chance to take even the mildest of risks than he returns to form. It takes two whole chapters before the Guild makes their appearance in this volume, and their delay is not necessitated by any grand revelation or board cleaning from the last arc. No, Asagari instead takes the time to waste yet another chapter introducing yet another minor member of the detective agency, and yet this time he does not even have the decency to offer up a challenging case or an interesting villain to job to play off of newcomer 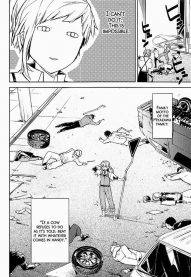 Kenji, a superpowered bumpkin whose immense strength and invincibility hinge on his starvation. All we get is a potboiler game of connect the dots and an alleyway tussle with nondescript thugs.

The second excuse to kill time is intended to showcase something of the internal politics of the port mafia and to develop the character of Higuchi, Akutagawa’s assistant, but there is no reason to waste any time further exploring either element. The internal strife of the organization hardly seems germane to the central plot, since no new lines are drawn or relationships redefined and a far more promising gaggle of villain waits around the corner; the Mafia have been played as bumblers at almost all turns; why try now to salvage them as a true threat when the previous three volumes undermined their every move? And why try to humanize them after three volumes of watching them extort, murder and blackmail in the pursuit of nothing more than money?

And why choose Higuchi as the vehicle to explore this by? Until now, she has been nothing but Akutagawa’s “yes woman,” spineless and useless and utterly disrespected by her own admission; the insights gained here do nothing to dispel that impression. If anything, they prove she is only hanging on out of an unrequited and utterly unbelievable love for Akutagawa, a fact which only makes her more detestable and less relatable. Why is she so willing to murder for a man who cares not a whit for her, and why is this devotion presented as romantic and ideal rather than abusive? Worse, it only further muddies the already unclear politics of the Mafia, the one organization it was supposed to clarify. Why would so many of the most respected and cold-blooded enforcers in an organization keeps a dunderhead like her on hand? Why would they risk their lives and backlash from rival organization in order to save her from her own stupidity when they’ve shown themselves willing to dispose of anyone who’d fail them, no matter how competent they were in the past? 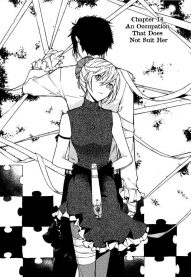 It’s possible there is something more subtle at work, a longer game being played, but later developments in the volume suggest that Asagiri truly does not know have any interest in exploring or aptitude for developing his character’s psychologies. For no sooner do the Guild make their first proper appearance in this volume than the series regresses into a battle that serves as an excuse to interrogate Atsuchi’s feelings of worthlessness by comparing them to the villain’s and his own attendant lapse back into crippling self-doubt. It doesn’t matter that last volume we saw a similar mirrored conflict between him and Akutagawa (or the volume before that and the volume before that), or that he was willing to die to protect a comrade then, because in this volume he has reverted so completely he literally decides to run away at the first sign of danger despite knowing this cowardice will condemn his friends to death. Why he should relapse so badly is not investigated or amended; the only thing that keeps him from leaving his friends to die is a pep talk from a middle-aged man he’s never met. No, our psychological victories in life are not total; we do not suddenly transform into Casanova simply because we bothered to talk to our crush instead of darting our eyes away. Changes come by degrees and announce themselves slowly as habits. But by the same token, they do exists, even after our moment of triumph; we carry even our smallest victories into further conflicts, evincing changes even if only a little. Nobody reverts as totally as Atsuchi does here.

Or maybe they do, if author Kafka Asagiri’s devolution is any evidence. This latest installment of Bungo Stray Dogs is so total a bit of backtracking that it’s hard not to feel as if it’s not playing at some greater thematic purpose in the clumsiest manner imaginable. There’s no promise of an exciting world to come, here – the new characters are as dull as the previous, their powers as bland and the battles that result as contrived – and no suggestion that Asagiri is taking a longer, deeper look at his characters’ souls. It’s as if he’s confused the start of a new arc with the start of a new series, the time to begin all over against as opposed to forge on. He’s like a dog who, chasing his own tail, catches it, lets it go, immediately forgets that it’s HIS tail, as he just discovered, and so starts chasing it again, hoping this time to catch and kill the invader that keeps pestering him.

Conformity in an Open World