There’s something incredibly appealing about a game meant just for two–it can feel intimate and casual and competitive all at once. Facing off with a close friend or loved one can bring out surprising emotions you had no idea were lurking just below the surface. Like your wife waiting for you to make the wrong move and choosing to build a second fence instead of gathering all that cattle that spent three turns accumulating and now she won’t stop rubbing it in your face and gloating about it, thanks.

If a game says on the box that it accommodates only two players, I’m far more likely to give it a second look. Recently, my wife and I have been playing Patchwork quite a bit, and while I’ve written about two-player games–including Patchwork–in the past, I feel that I’ve now played it enough to recommend it wholeheartedly to anyone seeking a fun, lighthearted game for two.

I’ve also become more familiar with the mechanics and strategy of the game thanks to repeat plays. The gist of it is this: you are a quilter in a fierce competition against another quilter to craft the most impressive quilt out of quilt patches available in the quilt market (quilt).

These patches cost buttons to buy, but you can only get buttons by adding patches depicting buttons to your quilt tableau. At the end of the game, you score points based on how much money (buttons) you have, and how many empty spaces are left on your board. In the end game, each button counts as a point and each empty space on your board costs you two points.

And therein lies the crux of Patchwork. The game is a delicate wire-walk between going all in on bolstering your button-based economy, and covering up those negative spaces on your quilt. 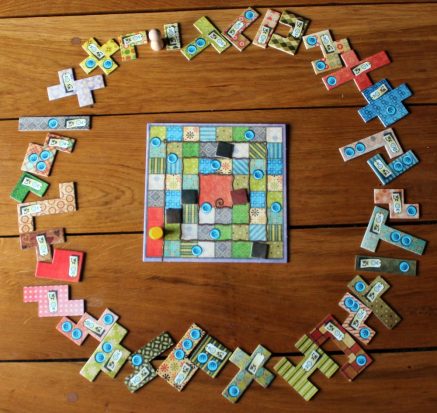 This balance is something I didn’t appreciate in my first couple plays. I ended my first game with negative 10 points, and my wife took the victory with four points. Admittedly, it was a bit disheartening at first, but experiencing failure in Patchwork reveals just how important it is to strike that balance.

It’s tempting to focus completely on gaining as many buttons as you can, but that will inevitably leave you with huge areas of uncovered board, and thus cost you points. I’ve found that, in the early game, it makes sense to go for those high-yield patches, and then transition to swiping the larger patches somewhere in the mid-game.

Designer Uve Rosenberg is best known for huge, table eating games like Agricola and Le Havre, so it was a bit of a surprise to see a smaller, more compact game from him. But Patchwork manages to feel unquestionably Rosenberg-esque. The game is unassuming in its difficulty, but it is undeniably elegant in its mechanics, not to mention very satisfying in that Tetris sort of way as you add patches to your quilt and puzzle them together.

Patchwork has become a standby game for me and my wife, but the competition is more against ourselves than against each other. It feels a bit like trying to best your high score in Donkey Kong Jr., or finish that crossword puzzle that’s been giving you problems all day. I’ve never been upset because I lost to her, but I’ve been upset because I did not utilize my quilt space in the most efficient way.

I recommend Patchwork for anyone who is looking for a quick 15 minute game, but is also looking for a game that demands logic and strategy. Uve has sewn up a masterpiece with this one.

Labor and Love: A Look at Worker Placement Games