I have complicated feelings about The Walking Dead. I’ve been a fan of zombie fiction since I saw Night of the Living Dead at my aunt’s house. The older I got, I saw beyond the flesh munching and realized that the best zombie fiction functioned as sociological metaphor. Night of the Living Dead harped on 1960’s American fears about race relations and mutually assured destruction. Dawn of the Dead is about consumer culture destroying us 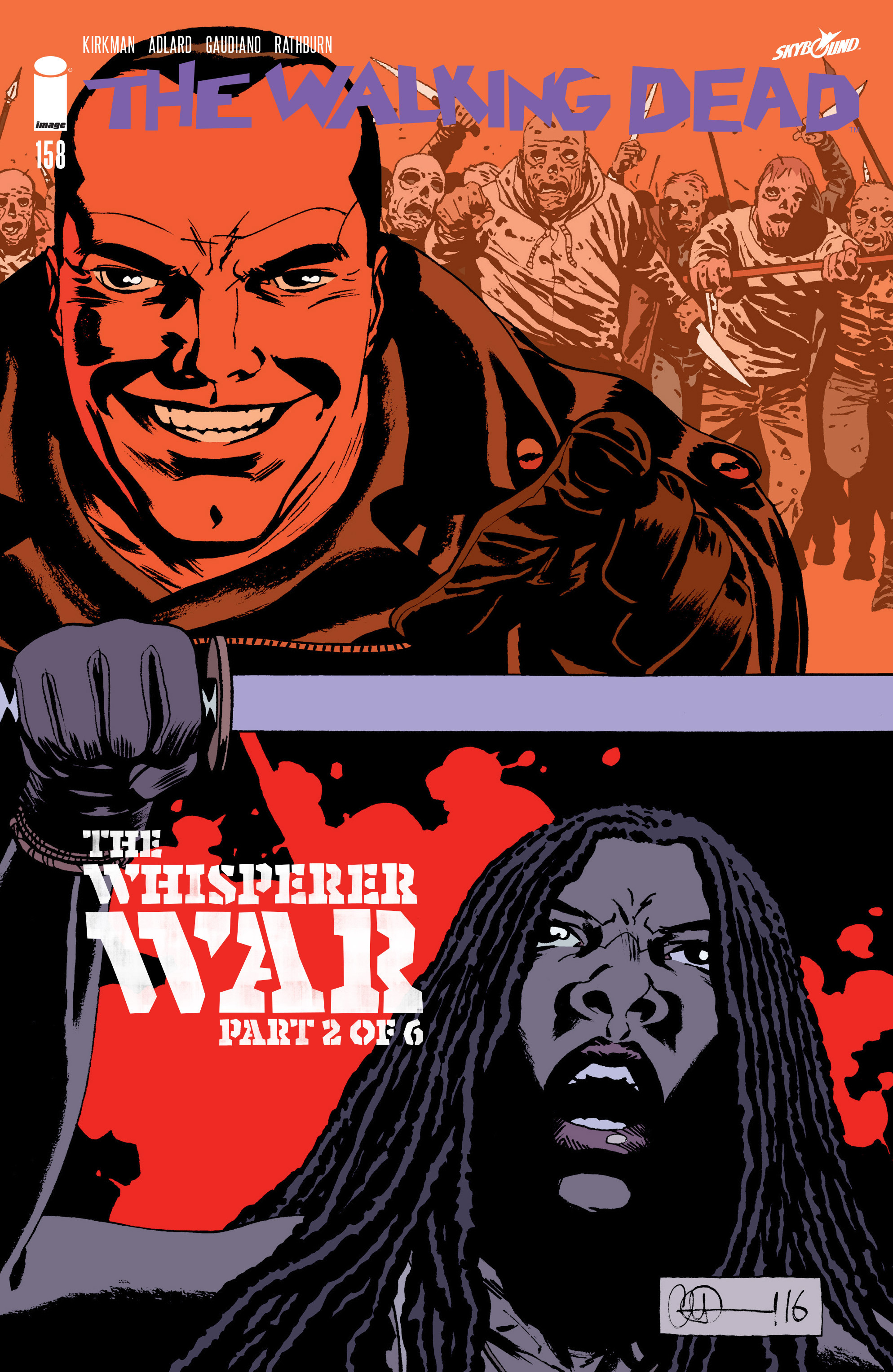 all. 28 Days Later warns viewers about the dangers of biological warfare and animal testing. Sometimes, The Walking Dead is a reflection of our society and sometimes it is a melodrama about a world where the dead want to eat your face. I like them both, but I always like it more when Kirkman and Adlard dole out subtext along with the gore.

Ever since The Walking Dead’s post “All Out War” time jump in TWD # 127, Kirkman and Adlard have been able to explore something we don’t often get to see in zombie fiction – reconstruction. Aside from Max Brooks’ World War Z novel (I never saw the movie) and Shaun of the Dead, we haven’t
seen a world scarred by the living dead rebuild their world. Rick, Michonne, Maggie, Andrea, Carl and the gang are in the process of rebuilding. They have farming, manufacturing, commerce and a system to keep predators at bay. It’s begs the question, how would you rebuild society?

TWD # 158 is the second part of “The Whisperer War.” It picks up right where the last issue left off. Gabriel sees a horde approaching. He darts down the ladder to warn his fellow survivors and what follows is pretty damn grim. It’s not Lori and Judith getting blasted by a tank grim, but it’s still a rough read. Basically, the survivors’ front line of defense weren’t ready for the sheer number of Whisperers there are and a whole lot of people get viciously stabbed and/or consumed.

The Whisperers, for those that haven’t been keeping up, are survivors who wear the skin of the dead over their own in an attempt to mask their own scent from the walkers. The Whisperers live among the Walkers, moving about within the horde. They believe that this is the only way to live and survive and that all other ways are weak. They claimed their territory by murdering several members of The Walking Dead’s cast and placing their heads on pikes along their newly proclaimed border. Nice folks, right?

Kirkman and Adlard are unrelenting this issue. So many side characters (and at least 1 longtime survivor) are unceremoniously butchered by the Whisperers. If you’re trade-waiting, this is probably the moment where you put the book down for a bit. These characters have spent 31 issues preserving and building on a new society based on sustained survival and it’s about to come crashing down.

Charlie Adlard’s storytelling this arc has been fantastic. He’s been using a 16 panel grid structure and he draw the hell out of every page! The scope of the Whisperer’s offensive is about as terrifying as their skin suits. The character acting is fantastic as always. Negan’s glee at all this chaos is in full effect, yet you can see his mind pondering ways to turn it all to his advantage. How Adlard keeps up this level of sequential storytelling astonishes me. He’s come a long way since Topps Comics’ X-Files # 1, and he was really good back then!

The Walking Dead # 158 isn’t exactly a great jumping on point, but if you could snag both this and # 157, I highly recommend it. It may not be heavy with subtext, but Kirkman and Adlard are exploring some new zombie infested territory lately and that’s worth the $2.99 alone.

Archie Comics surprised the comics world when they rebooted their core line with Mark Waid, Fiona Staples, Erica Henderson and Chip Zdarsky at the helm. Archie, which had such a successful, strong and identifiable house style for so long rebooting was a big deal! It’s been a little over a year and they have their first creative team shift with Jughead # 9 and man, Ryan North and Derek Charm make some good Jughead comics!

The issue is a classic Archie setup. The gang are at the school art fair where Jughead made a man made of junk food. After the fair, Reggie and Veronica decide to go to Pop’s, so Archie wants to go so Ronnie and Reggie aren’t alone, Since Archie wants to go, now Betty has a sudden desire to go 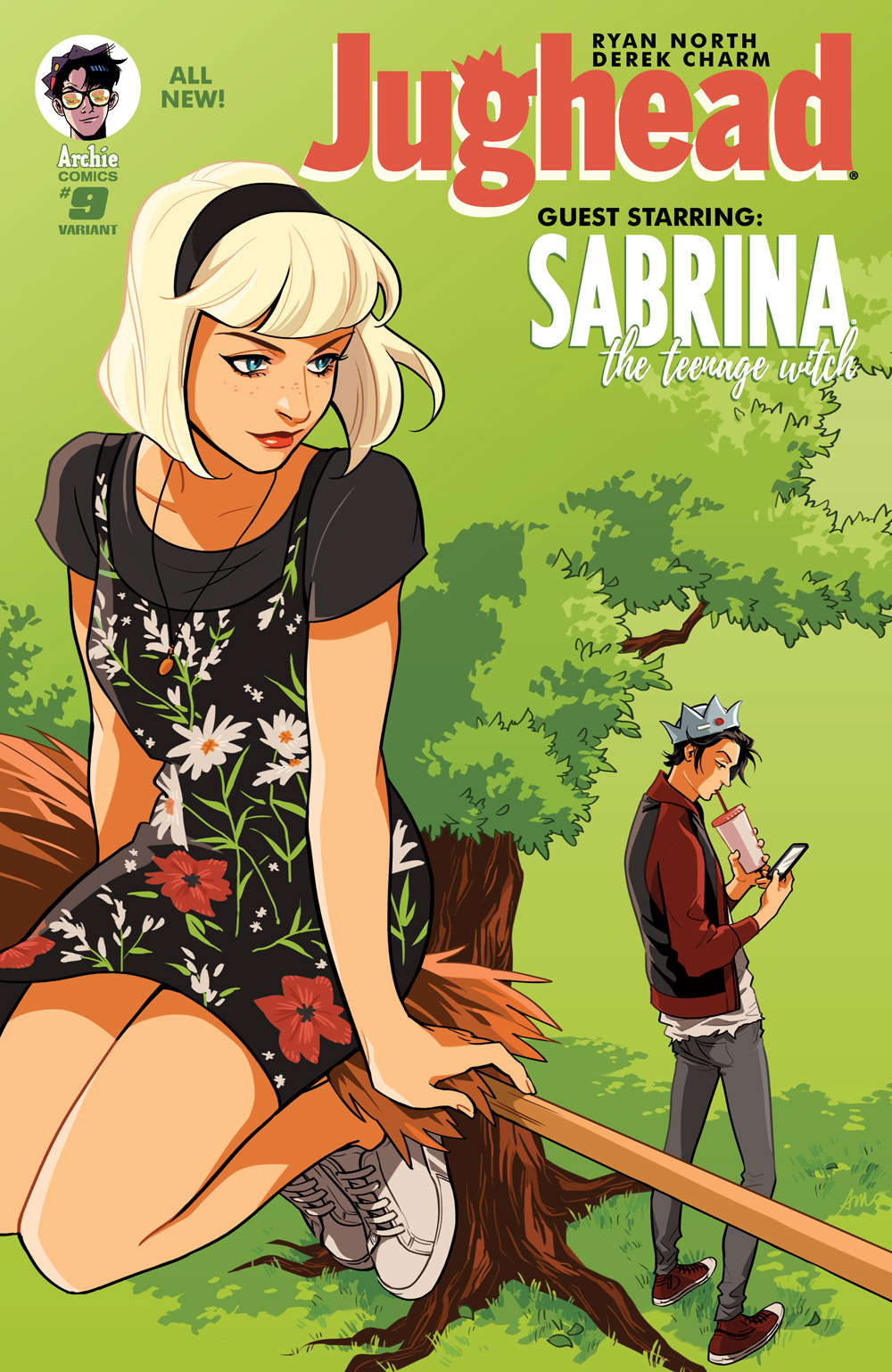 to Pop’s too. And then there’s Jughead – who never needs a reason to go to Pop’s besides being hungry. Once there, the gang clue Jughead into Pop’s newest employee, a Burger Lady mascot.

North and Charm explore a side of Jughead we seldom see. His obsession with Hamburgers has reached a new level and he doesn’t know how to handle it. So he goes to his girl crazy and boy crazy friends for help and what follows some endearing and hysterical Jughead and Betty hijinks as Betty helps Jughead talk to the Burger Lady. Seriously, Derek Charm’s character work here is perfect!

It’s almost a perfect Jughead story save for one thing. I’m just going the get this out of the way – the worst part of Jughead # 9 is that the issue’s punchline is on full display on the front cover. Spoilers, it’s clear Sabrina the Teenage Witch is the Burger Lady because she’s on every variant cover too, but she’s conspicuously missing for most of the comic. The covers steal the thunder of the last page reveal. I understand the marketing reasoning behind it though- Sabrina’s first appearance in New Riverdale, so it’s a big deal. Other than that, I’d dare say Jughead # 9 was my favorite comic of the week.

Biomega: A Nightmare of Scale