I’m sure you’ve seen this tagline before, whether it be on the back of a box or in the text of a review. It’s a common refrain in this age of local multiplayer and seamless online, but it’s one that often rings hollow. Of course this game is more fun with friends. Doing anything with friends is going to be more fun than doing it alone; that’s part of what makes them your friends. It’s like saying ‘Fries: better with salt’ or ‘Pixels: better while drunk (if only slightly)’. Really, it would be weird if a game wasn’t better with friends. Still, as a cheap marketing line, it’s usually pretty innocuous.

Where it starts to feel disingenuous is when games sell themselves solely on the idea of being ‘better with friends.’ I don’t mean your standard multiplayer game; I’m talking games that are only fun when you’re playing them with your mates. Games that enable fun, rather than actually creating it.

Take Mario Party as the prototypical example. Barring maybe the first two, the painfully long series consists of a bunch of generic, recycled mini-games that place more stock in luck than actual skill. Mashing buttons, rotating analogue sticks, and wrestling with unresponsive controls is the name of the game, harkening back to all the bad parts of gaming’s early years. The board game structure leaves little room for strategy, preferring instead to randomly punish and reward players, regardless of whether they deserve it. Throw in the end-of-game Bonus Stars awarded for inane ‘accomplishments’ like landing on the most ?-block spaces, and the whole thing feels about as interactive as a Choose-Your-Own-Adventure book with only one ending. 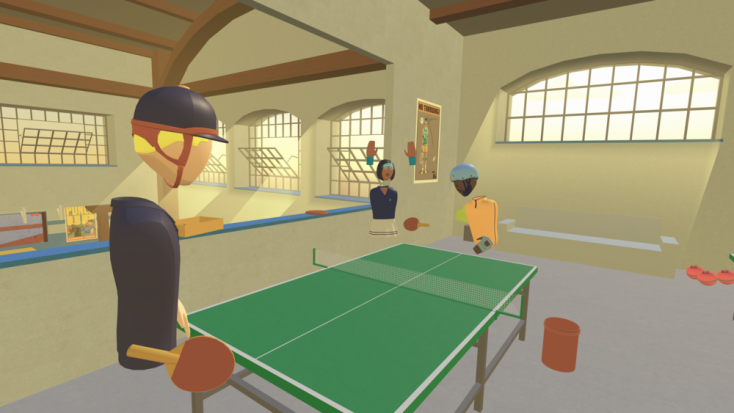 And yet, people still go to bat for Mario Party, even as the series devolved further into gimmickry with the Wii and Wii U iterations. The thing is, when you’re playing Mario Party with friends, all the woeful mini-games and unfair randomness become vectors for communal frustration and shared despair. Mario Party becomes the enemy that unites you and your friends as you battle against its poor design with a chorus of sighs, groans and exasperated insults. ‘Fun’ arises when you finally score yourself a star despite the game’s every effort to screw you over. Sadistic smiles form from the schadenfreude of watching your pals falling victim to the same injustices that messed you up five turns back. When you’re having fun in Mario Party, it’s in spite of the game, not because of it.

A similar trend is emerging in the virtual reality space. Games like AltspaceVR, SurrealVR and Rec Room drop you into virtual common rooms with naught but your wits and a handful of emotes, leaving you to make your own fun by messing with physics, furniture and other people. VR is still novel enough that even mundane interactions feel fresh and exciting, but what happens when that novelty fades? Sure, it’s fun to fool other players into thinking you’re a friendly chatbot and convincing them to tidy up a virtual bar as if it were real, but that’s fun you created, more so than the game. If someone else tried the same thing, there’s no guarantee it would work, or even be fun. The experience is almost entirely contingent on the people involved. How much praise, then, do the games themselves deserve?

Of course, if you’re having fun with Mario Party or Rec Room, does any of this really matter? If fun is your end goal, the answer’s probably no. Nevertheless, I can’t help but feel like these games–and even games like Destiny and The Division–get something of a free pass thanks to the power of the ‘better with friends’ philosophy. Not everyone has friends to play with, and even when they do, ignoring the role friendship plays in their experience undermines the value of their criticism. Identifying why you are or aren’t having fun is crucial to good critique; if we treat games as black box systems separate from the real world, we only ensure they’ll never be more than simple, trivial curiosities.

Back to the Couch