PAX made the trip down under this past weekend, capping off Melbourne International Games Week with a convention center full of eager gamers lining up to get their hands on the hottest upcoming games. I joined them, scouring the show floor for the most intriguing sights, sounds, and smells–but I won’t subject you to the latter. Instead, let’s start by looking at the indie games that most stood out to me. 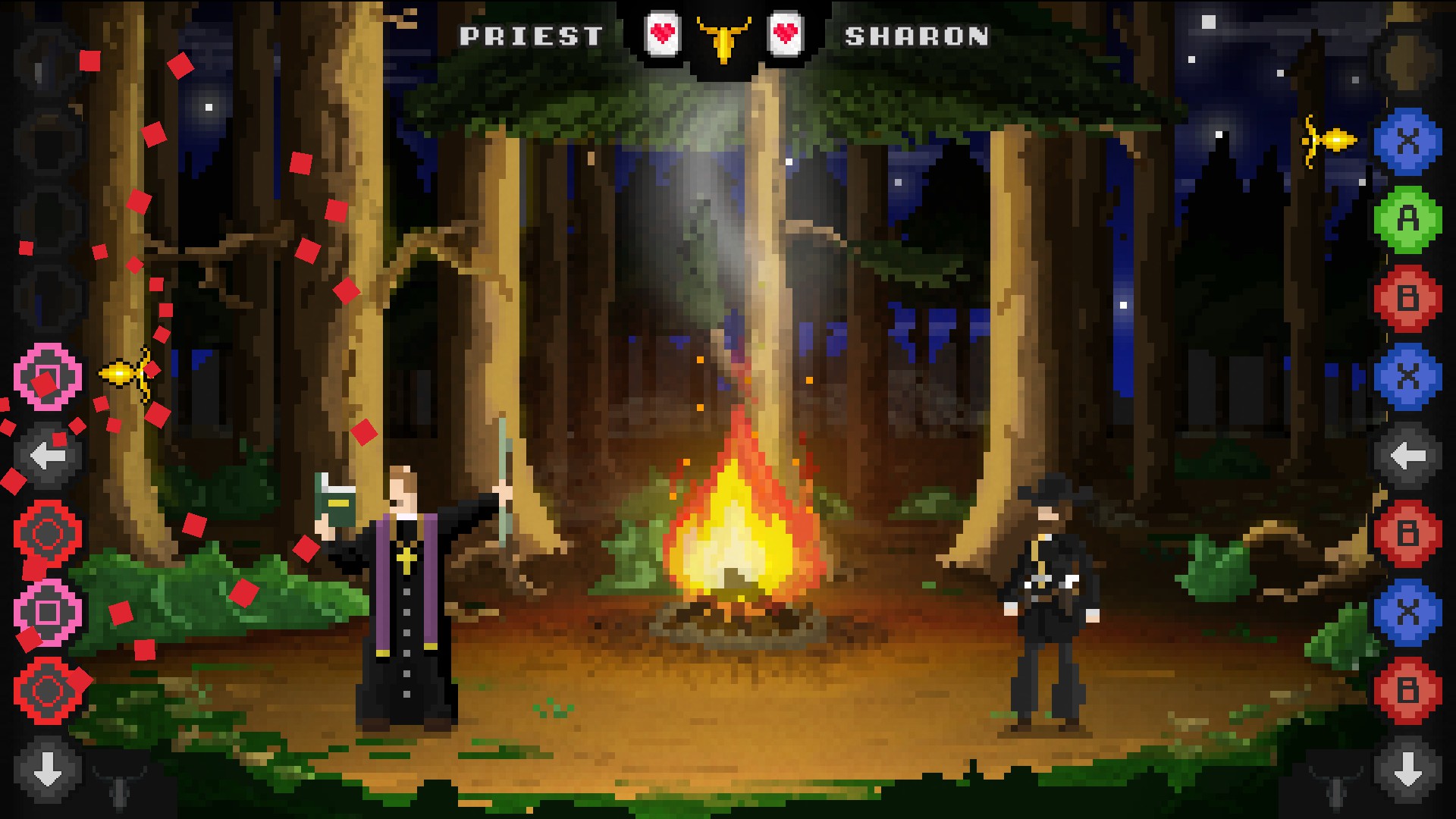 The first game I got my hands–or, more accurately, my feet–on at PAX Australia was Western Press, a 1v1 frontier-themed duelling game currently available on Steam. The premise is simple: both players are served a string of ten buttons to press, and whoever enters theirs the fastest wins. While I’m sure the game’s fun enough on keyboard or gamepad, the draw of the PAX booth was the Dance Dance Revolution hooked up in lieu of more traditional controls. I’m pretty awful at DDR, but somehow I managed to lead Stan Bones, a dual-wielding cowboy who also happens to be a skeleton, to victory against a shotgun-toting priest.

I quite enjoyed the quips the characters made between rounds–Stan Bones mumbling ‘Humerus’ to one of the priest’s snide remarks was worth a chuckle–and the game itself seems well-suited for parties, especially when the booze starts flowing and you find yourself unable to tell which button’s square and which one’s circle. At $5, Western Press knows exactly what it is, and after reading this, frankly, so do you. Second on my schedule was Dismantle, a four-player competitive brawler where you play as giant robots beating the tarnation out of each other. The hook, as hinted by the title, lies in your ability to tear enemy robots limb from mechanical limb. Arms and legs go flying, but you can fight on–like in Monty Python and the Holy Grail, anything less than total destruction is just a flesh wound. This leads to a lot of goofy situations where you’re hopping around on one leg trying to dodge your opponent as they swing your former leg at you like a club, or you’re rolling around the arena as a disembodied head, catapulting yourself onto other bots and gnawing away at their limbs like a dog with a stuffed toy.

Like Western Press, the game is clearly designed for pick-up-and-play when your mates come over. There’s no online play–the team said they’d be looking into after release–and though there will be a single-player mode, the simplistic combat and lack of any progression systems makes it seem more like a tutorial than a campaign. Nevertheless, with a couple of buddies to beat up, Dismantle could provide a few good laughs. If local multiplayer is your thing, you can find out more about Dismantle here, and vote for it on Greenlight if you want to see it on Steam.

Sifting through the many, many local multiplayer games on display, I stumbled upon Ticket to Earth, a turn-based strategy puzzle game with a bright, charming aesthetic hiding a surprising amount of tactical depth. Set on small, grid-based maps, the game mixes up the standard XCOM template by injecting a match-three element into combat. Floor tiles are colour- and symbol-coded, and each time you move, you can only travel across tiles of the same type. The real kicker, though, is that just like in match-three games, the longer your chain of tiles, the more power you build up. For example, your melee character might be able to make a bee-line for the enemy by crossing three fist tiles, but then your attack will only deal base damage plus three. If instead you trace a longer path to the enemy across eight heart tiles, you’ll hit for base damage plus eight.

Thing start to get more complex when you factor in tile affinities. Ranged characters get a boost to their line of sight for every eye tile they cross. Heart tiles can heal characters if they have a certain perk equipped. Special abilities build up charge as you traverse their corresponding tiles, enabling buffs, stun attacks, and super-powerful orbital strikes.

Even from my limited time with it, it’s clear the trade-off between positioning your characters and building their power has the potential to be deeply engaging. Coupled with the intriguing story of Rose, the female heroine fighting to escape Mars on the final colony ship heading home to Earth, Ticket to Earth’s novel blend of strategy and match-three has my attention. I’ll be keeping my eye out for its release later this year on mobile, and sometime after on PC and console.

That covers the small stuff. Stay tuned for my next report, covering the AAA and miscellaneous side of PAX Australia 2016.

A Diary from PAX Australia, Part Three: Hand of Fate 2

A Normal Lost Phone: Learning About Identity Through Objects