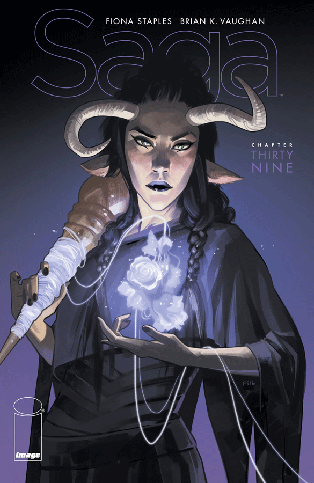 After the gut punch of Izabel’s death last issue, Vaughan smartly uses this one to slowly move a few other storylines forward. Though it’s never wise to wallow in grief, in a time of war it’s downright stupid.

Petrichor continues to come into her own in this issue, and the newly introduced freelancer The March uncovers some secrets at the robot embassy. It’s becoming clear both – or all, considering The March seems to house a dual-consciousness in one body – are going to play major parts in the remaining chapters of The War for Phang, and perhaps beyond (I hope!).

We also catch up with The Will and his booking agent early in the issue. We even learn his real name, the unsurprising blandness of which made me laugh. The whole section is a refreshing bit of comic relief after a major character’s death, and Fiona Staples takes the opportunity to insert some bright sunlight into the art, a nice contrast to Phang’s blue-tinged night.

But back to war and the funny things about it: the dead aren’t ever the only casualties. We’ve watched Hazel grow up with the prolonged battle between her parents’ people raging around her, generally maintaining a child’s optimism all the while. Now that she’s felt Izabel’s final departure, that optimism is shattered.

In one of the most beautiful segments of the whole series, Hazel and Kurti, another young refugee, discuss the possibility of an afterlife and whether or not the stories we tell ourselves, particularly the ones told to children by adults, are only illusions offering a false sense of safety and hope. Like Hazel and Kurti, most adults were once children who believed in fairies, and ended the day they stopped believing a little more grown up. 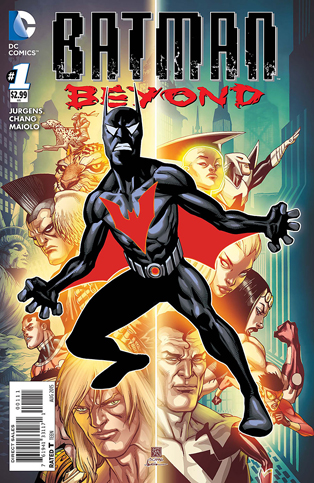 I’m suffering from Bat-fatigue. Batman and Detective Comics have both failed me, a feat I thought impossible. But maybe it wasn’t Batman that had failed me, maybe it was Bruce that failed me. So I traded in Bruce for Terry and picked up Batman Beyond #1.

Don’t get me wrong, I love Bruce. I think Bruce Wayne can offer some of the highest highs and lowest lows that comics have to offer. But that’s in the right hands. In the wrong hands, Bruce just punches people and bumbles his way to the final punchening while Gotham gets blown up.

That’s the beauty of Terry McGinnis. Terry punches things too but he’s a blunt instrument. He’s lacks Bruce’s years of training and experience. He’s not the World’s Greatest Detective, he’s got close family connections, and, since it’s the future, he’s got a flying car.

Unfortunately, Batman Beyond #1 lacks a flying car. But it does include a Terry coming back into his own. He’s out of practice and it shows. He gets his ass kicked. And he totally deserves it. He’s trying to be Terry being Bruce.

The book is fine, especially for a “first issue” (there was a Rebirth #1 as well). It’s drawn well, moves at a good pace, and ends with Batman pulling a figure Jokerz version of Matches Malone.

But what has me worried is what’s being shown as the big bad behind the scenes, the real, honest to goodness Joker. And not in a Return of the Joker kind of way. Nope, that could at least be a little cool. Instead, some street gang members are going (to borrow from Matt Damon), to “science the shit out of this.”

As I mentioned, I’m in full Bat-fatigue mode so the idea of Jokerz Town and the old Joker coming back are just uninteresting to me. What about the original villains that Batman Beyond created? What about rehashes of more obscure villains that Bruce might not have prepared Terry for?

Return of the Joker worked so well in part because he was almost totally absent from most of the Beyondverse. His specter loomed over it but his flesh and blood self was absent. Starting the Rebirth series with a Joker plot seems to waste the buildup.

I’d really like to see what comes of this series but I’m about to enter a holding pattern on it too. There’s no moment or hook that demands I pick it up. Maybe that will change, hopefully quickly, but for now it’s just the first act of a middle of the road episode of the TV show.

Office of the General Counsel Episode 8 – Did You RICO?