Note: I write this on Saturday morning with the knowledge that everything I describe here might have changed by the time this goes live on Wednesday.

I am not a fan of the second and third movies in The Matrix trilogy.  And yes, I know, that doesn’t make me unique. But to me, the biggest problem with Reloaded and Revolutions wasn’t the truckload of new characters or the goofy-looking CGI. It was the failure of the filmmakers to live up to the courage of their convictions.

You see, The Matrix trilogy was setting us all up for a wild twist ending on the order of The Sixth Sense, a reveal that would have blown our collective minds. Then, it chickened out and gave us a standard action movie ending.  I’ll let the pop culture gurus over at Cracked.com explain:

In Revolutions, Neo’s powers from the Matrix have seemingly transferred into the material world. For instance, he can “see” (despite having charbroiled his eyeballs) and also manifests the power to blow up machines with his mind. This has been a pet peeve with fans who note that this makes absolutely zero sense in the context of the Matrix universe.

But one theory posits that Neo’s sudden, convenient-to-the-plot superpowers were possible since he never left the Matrix at all.

These fans figure “Zion” and the whole world Morpheus and the other “free” humans lived in was a separate Matrix unto itself, a second layer of the computer program to let some people think they had escaped. Thus it makes perfect sense that Neo would have magical powers in what he thought was the “physical” world.

Pretty cool, right? I mean, think about it. Wouldn’t that have been much better than “Neo is the robot Jesus.” And it makes a special kind of sense. According to this theory, the robots who run the Matrix realized that our pop culture is full of stories about The One, the lone special someone who is able to break all the rules and create change. Think: Frodo Baggins, Luke Skywalker, or Harry Potter. What if the machines recognized this human impulse to imagine themselves as more important than they really are? What if the city of Zion is just another simulation designed to fulfill the fantasies of those who wish they were a part of something grand? Think about it: the second and third movies in the Matrix trilogy unfold like videogames, with Neo and the rest of his group running around to collect talismans and searching for the entry to the Final Boss’s lair. Hell, the battle of Zion looks like a game of Centipede with a graphics update.
Unfortunately, the Matrix trilogy fell short of giving audiences the ultimate mind-fuck they all craved. However, it looks like HBO’s Westworld might be taking up the slack. You see, from the very first episode, this remake of the cult classic 1973 film (directed by Michael Crichton seventeen years before the publication of Jurassic Park) has been playing with our expectations, constantly asking us to guess who is a human Guest and who is a robotic Host.

I think HBO has it in them to go where The Matrix didn’t dare, to peel back the surface of what is already a meta-narrative about entertainment and identity and to even deeper down the robot rabbit hole. The following are my predictions about what kind of form this twist could take, presented in order from most to least likely. 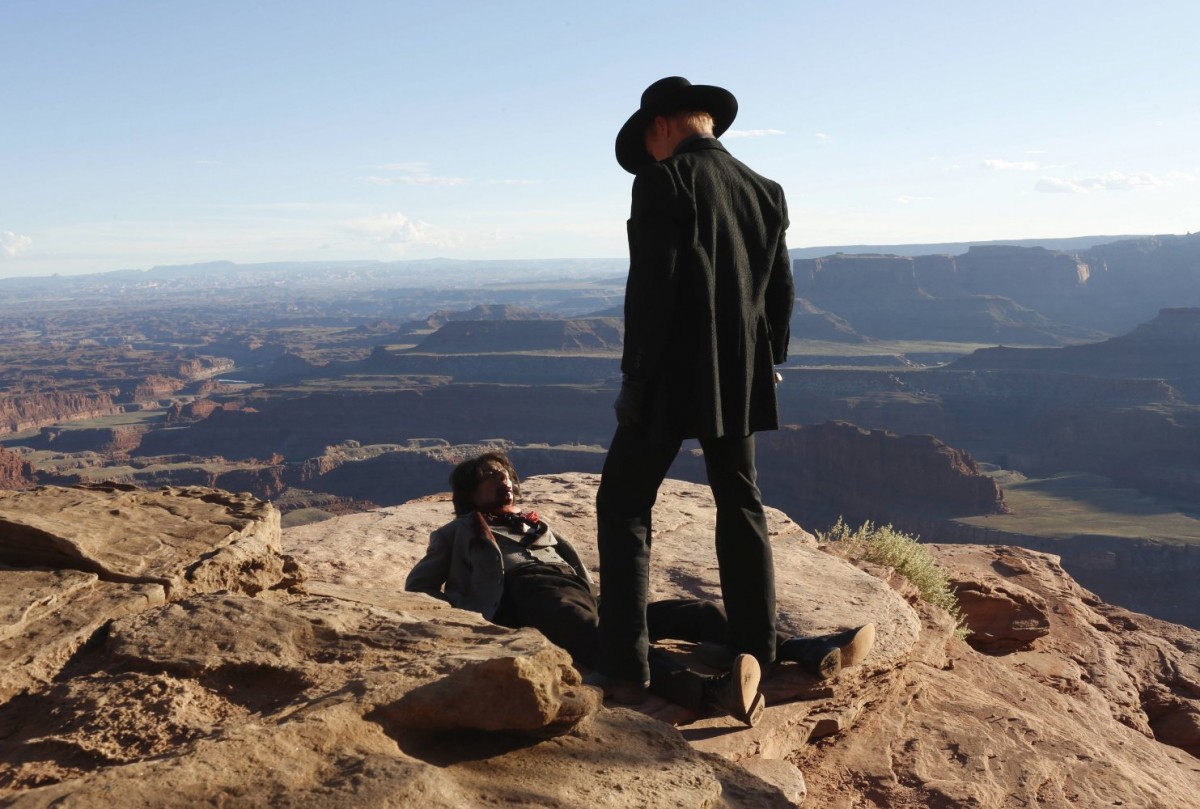 
Ed Harris’s Man in Black has been presented to us as an elite customer, a Guest whose spent so much time and money in the park over the years that he has basically been granted free reign to do pretty much anything he wants.  And, much like fans of online virtual worlds do today, the Man in Black has decided that, now that he’s seen everything the game has to offer, he will see if it is possible for him to break it.

But what if the Maze that the Man in Black seeks is something that he was actually intended to find?  Anthony Hopkins’s park director, Dr. Ford, seems to me to be the kind of man who could anticipate the ennui that a regular customer could develop and who would have a contingency plan in place for it.  I am imagining the Man in Black undertaking an epic quest that he thinks he has chosen of his own volition, then dying as a result of some kind of robotic “malfunction” just as he is on the cusp of achieving his aim (reaching the control rooms underneath the park? Liberating the Hosts and turning them loose?). And why not? It would be unlikely that a Guest would ever return to the park again after such an experience. In this scenario, the final shot of the season would see all of the chaos the Man in Black wrought erased at the start of a new day with a new influx of guests.

Alternatively, what if the Man in Black really isn’t a repeat Guest? What if he is actually a robotic host who has been programmed to think he is a guest (one who has been given a special exception within the game’s programming to make him immune to the park’s special guns just like the humans are). Perhaps he is a creation of Ford’s long-lost partner Arnold, who was obsessed with creating real artificial life rather than elaborate toys for the rich guests to play with.

True, another patron in the park did recognize him from his job in the real world a few episodes back. But maybe the Man in Black has simply been designed to resemble this man, the better to convince him that his pre-programmed back story is actually true.

Speaking of good ole Arnold, what if our beloved leader, Dr. Ford is himself a robotic creation of the now-deceased co-founder? This would explain his penchant for visiting the retired hosts down in the basement of the facility.  Perhaps he was always an android and Arnold left him to guide the park according to his vision after his death. Or maybe the real Dr. Ford has been replaced by a robot under the noses of his fellow employees as a part of the corporate sabotage that Bernard suspects is behind the strange behaviors of the robots within the park.

Or perhaps Dr. Ford is who he says he is and his employees are a group of robots he built to help him keep the park running. This would explain the relative isolation of the park headquarters. If the employees have been programmed to think that they arrived for a three week long shift in the park’s “backstage” area, then that would mimic the Hosts’ programmed storyline cycles. And Dr. Ford’s scene with Bernard where he seemingly reminded him of the tragic death of his son Toby looked very much like the scene where Ford programmed Teddy with a new back story.

So what do you think? How deep do the secrets of Westworld really go? How confident are you in your predictions for the series?  Share your own conspiracy theories in the comments section below!

The Fear in a Handful of Dust