I’m torn with Moloch. I liked parts of the comic, particularly the impassioned sections that add levels of humanity to the title character. But my issue with the story is Moloch’s one-dimensional drive for vengeance and the way JMS writes Adrian Veidt as nothing more than a cold and calculating murderer. 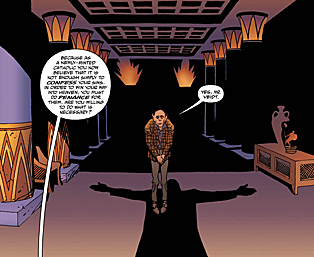 In Watchmen, Moloch is an aging villain with a tenuous connection to Pyramid Industries, and Adrian Veidt is an aloof but clement CEO whose motives push the ethical boundaries of ends-based thinking. In Moloch, we see the connection between the two, and here’s where the waters between Watchmen and Moloch muddy.

Veidt hires Moloch to work on mathematical formulas and run various errands for him, but why this never comes up in the beginning of Watchmen is too big a plot hole to ignore. Moloch wouldn’t dare keep his employment through Adrian Veidt a secret, especially from somebody like Rorschach, so the series is basically nullified by this issue.

Despite this, some of the writing is brilliant. Dialogue in particular works for effect, especially in the scenes between Adrian and Moloch. Veidt’s over-the-top villainy becomes too much to bear, especially when his master plan is revealed, but the sympathy readers can feel for Moloch is palpable. Part of this is due to Eduardo Risso’s drawings. He makes Moloch look small and feeble in every scene, and as the end of the comic draws near, Risso shows readers a defeated man with nothing left. His end is really a compassionate gesture on Veidt’s part.

When Before Watchmen started, I don’t think many people knew the series would branch off in such directions. Giving insight into the villains adds nothing to the original Watchmen, even if the story adds some prescient knowledge of the characters. But having a linked story, especially one this important to the plot, is dangerous, especially due to the faith it asks of readers. JMS’ writing is impressive, and Eduardo Risso’s art is strong, communicating the real emotions of the comic. If not for its Watchmen connection, the story would be a lot better. 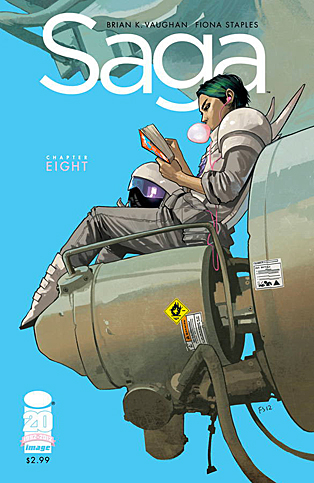 Saga is more than just a book about an interspace journey, and if readers need a reminder, they have to look no further than issue #8. Brian K. Vaughan’s ultimate goal seems to be to add depth to his characters’ relationships, because by the end of the comic, Alana and Marko’s history is a bit clearer. And while the story doesn’t move forward much, the book is not short of action.

Vaughan splits the comic between Marko and his mother, and Alana and her father-in-law. This technique helps to give readers insights into characters’ true feelings and the secrets they’re withholding from each other. The pacing, in particular, is responsible for the smooth transition from scene to scene. In these moments, Vaughan’s dialogue shines in its capacity to induce humor, anxiety and sadness. In particular, you’ll feel the connections Vaughan has developed between the readers and his characters, especially when learning about one character’s sickness and the impact it could have upon the rest of the characters.

Fiona Staples’ art, as always, is perfect. Beyond the usual character designs – through inks and shading – her colorization is of note in this issue. The cosmic, yet artistic-looking backgrounds and eclectic, yet tangible worlds she creates are only two of the many aspects that make the comic visually attractive on every level.

The book lacks the same punch as previous issues (which is why it’s not a “pick of the week”), but this is like saying a book is perfect instead of super perfect. Vaughan’s creativity knows no bounds, and Staples’ artistic prowess give life to a world that exists only in their minds.

Yet due to their talents, Alana and Marko’s world – just like their love – is as real and solid as any found in our own terrestrial lives. 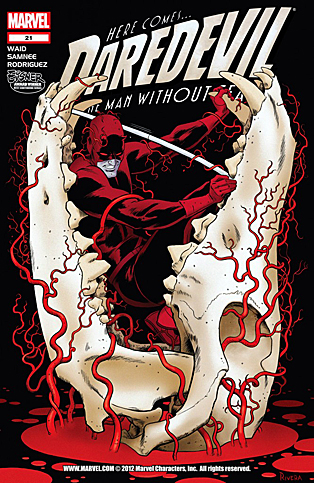 Bannen’s Book of the Week: Mark Waid’s ability to balance story and character is a thing of beauty. While he spends the first half of the book resolving Daredevil’s issues with the Spot and Coyote, the finale between Foggy and Matt, as well as the climax (featuring the new Spider-Man) make the comic a perfect mix of story and action.

What works best in this comic is the ways Waid displays Daredevil’s abilities. He’s masterful at showing how resourceful Matt is and how helpless he isn’t. His fight with the Spot is grotesque (especially when we see how Spot uses his powers – think Human Centipede design) and Matt’s emotional argument with Foggy shows that while the mystery may have been resolved, the conflict certainly hasn’t.

And Matt’s argument with Foggy really is the crux of the book. While they both figured out that Coyote was trying to set Matt up, the quickness with which Foggy turned on his best friend is too much for Matt to reconcile. In his haste, Foggy has done something that will forever alter their friendship. The final pages foreshadow the coming of a new (and brutal) Spider-Man and tease what is sure to be a major shake-up in Amazing Spider-Man #700.

Chris Samnee is brilliant in this issue. The tension he builds through quick action shots, small and detailed panels and colors and shading is impressive. The battles of the comic are exceptionally precise, and through such visual clarity, the comic benefits in every way. Spot has never looked so terrifying, and he has Chris Samnee and Mark Waid to thank for moving him from B-list criminal to A-list villain.

Daredevil is an Eisner Award-winning book for many reasons, and reading it has been a continuous pleasure. Waid knows how to write Matt as a hero, and Samnee knows how to make him look superhuman. This is a comic that makes me sad I’ll never be this good.

Being blind never seemed so cool.

Rookie of the Year: The Greatest Christmas Gift Ever*