So this is the way the arc ends, not with a bang, but with a – oh no, that’s definitely a bang of an ending. Whoa.

Kieron Gillen told us all from the jump that the time spent with the members of the Pantheon had a limited shelf life. It’s so hard to resist buying into the immortal hero trope, though, despite Gillen subverting it again and again, not least because he’s no slouch at the double subversion. Remember Laura and the hope that gave us regarding Luci? And Inanna? And Tara? Just me? (NO BUT SERIOUSLY WHICH GOD WAS TARA I NEED TO 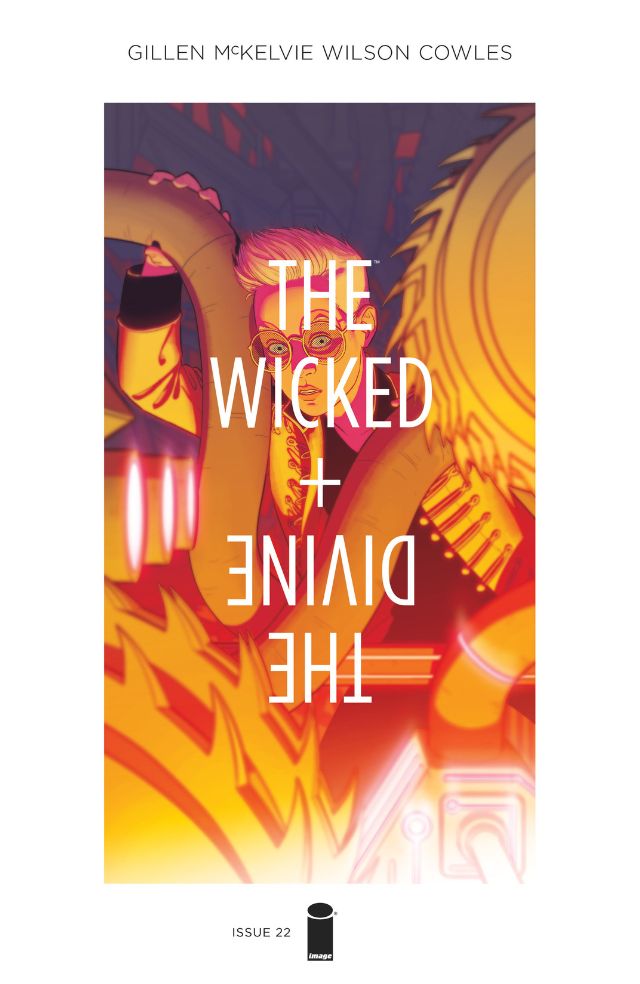 KNOW, GILLEN.) I don’t want to get too spoilery, even if I do write for a comic review column that hangs a lampshade on its tardiness, so let’s just call the overall narrative of this arc-ending issue an emotional roller coaster and call the dishes done.

On to the specifics: I’m glad I was right about Baal and Ameratsu being too smart to be deceived by Ananke for long, especially since Ameratsu does the smartest thing of all and hightails it to South London to ask Cassandra and her crew to come talk sense into everyone else warring at Valhalla. Why does she run to The Norns for help? “Because [Cass is] the grown-up.”  As an aging, cynical journo myself, I don’t think I’ve ever related more to a character than when Cassandra replied to that assertion of adulthood with a sneering, “it’s worse than I thought.”

I’m also glad/annoyed that I read Woden’s apprehension about murdering 13-year-old Mini correctly. I’m glad because he manages to purposefully clue Dionysus into the weakness of his giant Valkyrie golem via the subtext of his bad-guy monologue, the better to maintain plausible deniability as a villain in Ananke’s eyes after Dio successfully destroys it and turns the tide of the battle. I’m annoyed because I hate when giant turds like Woden do the right thing after being enormous assholes, because ugh! Ok I get it, despite what happens in my comic books, most real humans are a mix of good and bad and it’s probably best to generally give them the benefit of the doubt, FINE.

Woden’s brief moment of redemption, especially since it’s one achieved through manipulation, is a testament to the ongoing strength of Gillen’s writing. Jamie McKelvie turns in some fine work as well. The panel where a tortured Minerva twists away from Ananke as the elder woman cuts into the girl’s tiny arm is particularly gut-wrenching. As for the rest of the creative team, I’ve praised Matthew Wilson’s colors before, but he deserves huge props for this issue. Laura’s glowing tentacles serve as the main source of light in several panels, and the effect is stunning.

The end of the issue leaves us with a group of young gods practically drowning in their own potential as deities. There’s a terrific power in youth, for good or ill, and judging by Ananke’s lamentations, there always has been. Next month, we get a one-shot special featuring Pantheon members from 1831, so I suppose we’ll find out soon enough.

Rebirth has been a messy affair with unclear implications so far but it’s actually made Justice League much more readable to me.

One of the biggest problems that I’ve had with Justice League was that they were kind of invincible. Sure, they each have a weakness but these 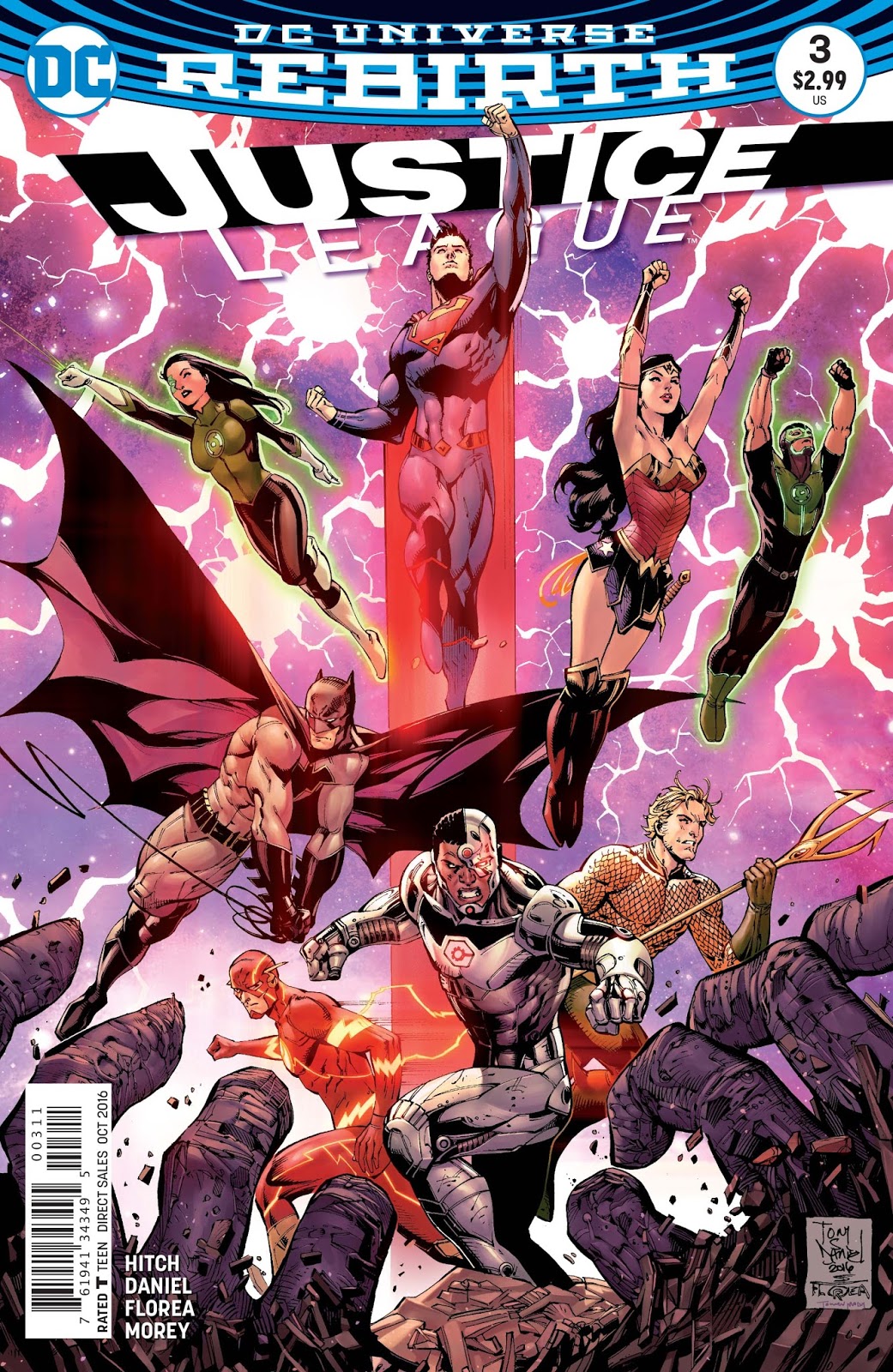 no nuance in a hard counter. Scissors would find a way to get trotted out against paper, ad infinitum. Even Superman’s later weakness to magic seemed too good to be true and its inclusion was uneven at best.

It’s not a new team but the dynamic is as unstable as ever. The League doesn’t want to trust a new Superman but they need to utilize a new Superman. Given that none of the other heroes can withstand the heat and pressure of the Earth’s core it’s down to the new, old Superman.

The idea that Batman has to trust a new Superman while still mourning the loss of his friend goes to interesting places. This Batman is a pragmatist. He needs to use Superman but doesn’t need to trust him, not yet. That came from years of working with him, of coming to really understand him.

On top of that the League has to adjust to not one but two new Green Lanterns. Newbies who, to them, are untested. Especially given a global attack that strikes at the heart of what makes the non-Batman/Cyborg members powerful, an exterior source of power.

Of course it’s not a perfect premise. All of the Flash’s scenes have played out exactly the same across Bryan Hitch’s run. Someone starts a sentence and then he zips around and does the task before anyone can finish. It’s a Flash trope that doesn’t seem to be dying anytime soon. It’s also still unclear if the team will be sticking together long term or how they’ll continue to work together when the story keeps spreading them across the globe.

Tony S. Daniel does another commendable job with the art here. These “it all goes to hell” arcs can have a tendency to be overwhelming but this third issue charts a nice middle ground. It’s never too much and many of the close ups nicely feature the main, anguish, or peril that the scene demands. Also, major props and tip of the hat to colorist Tomeu Morey. Morey knows a scene can be dark without losing vibrancy and that’s an art.

While still not perfect and not one of the best arcs Hitch and company do an admirable job putting out another solid issue. It won’t blow anyone away but it looks like Justice League might go places.

Rather an Araki than a Franzen Be