Always wanted a baby but never had one pirate-y enough for all your pirate baby names? Wow. Really? That’s perfect. I’m rubbish at naming characters. Send me your pirate names and if I like them enough I’ll put them in the game. Anyway, this is the fifth in an ongoing series about a fumbling idiot’s attempt to write some interactive fiction. You can find pieces one, two, three and four here, here, here and here, if this is your first time and you don’t want to miss out on any anti-vampires.

Part Five: Teeth. The portholes to the soul.

I should be honest. I’m scared of the bit where I actually have to sit down and write my interactive fiction. What if it’s rubbish? What if it’s infantile doodling that fans of The Beginner’s Guide cock their monocles at while sniggering into their martini glasses? That’s the last thing I want. I love The Beginner’s Guide, and monocles are scary and weird. So, this week, I’ve been stretching out the development process as much as I can, just in case I accidentally have to write something.

Mostly I’ve been focusing on the characters. Knowing that they’re all sky pirates and laser cowboys has only gotten me so far. I still need to figure out the backgrounds of my protagonist and antagonists – their goals and motivations, vulnerabilities, character arcs, physical appearances, names and proficiencies in pirate/cowboy martial arts.

The main antagonist, the captain of the pirate ship, will be female because (a) why not? No reason why sky piracy should be a male-dominated industry; and (b) try telling adolescent-me that girls aren’t scary. Let’s call her Grainne, after Gráinne O’Malley, an unforgiving-sounding pirate from the west of Ireland, and make her a merciless soul who cares more about money and ordering people around than the dental hygiene of her crew.

Given that it’s such a short piece of interactive fiction, I don’t think I’ll need to fully (or even slightly) delineate many of the characters. I’ve developed a first mate as well (raised by the captain aboard the ship; religious maniac with her as his deity; thinks she has extra-physical powers; good at pirate-fu). Basically he’s Mad Dog from The Raid: Redemption with a weird cultic component to him. 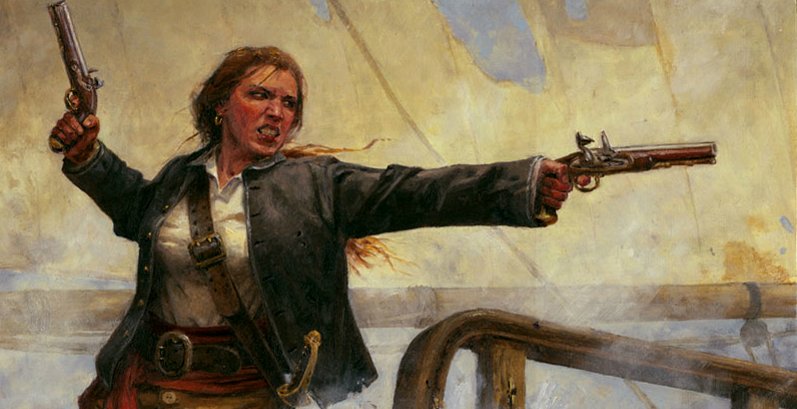 The rest of the crew are cannon fodder – your everyday, supposedly lethally skilled but in practice quickly offed bit-part baddies of every action flick you’ve ever seen. I have also created a few customers and staff, including a bank manager. Some of these will have pre-existing relationships with the protagonist, but most of them just exist to be offed. I feel bad for them. I wish their imaginary lives could have been more fulfilling. But I also feel great that I don’t have to do more character work on them.

The tellers will be robots. Robots with punningly named armaments.

I spent a while fleshing out a meatier role for one customer, a man who tries repeatedly to intervene in the bank robbery, failing spectacularly each time (motivation: be a hero; personal capabilities: none). He might not make the final cut though. I already feel too sorry for him. I think he had it tough at school.

And the bank manager. Hmm… all the motivations that seem natural for a bank manager to have (staying alive; stopping customers from dying; 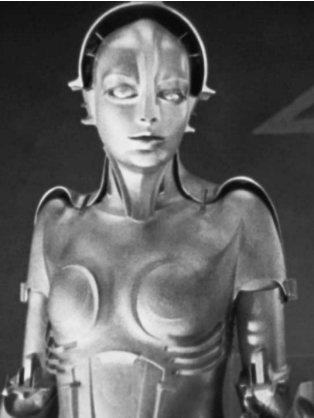 saving the money to satisfy her corporate overlords) are pretty boring. I need something quirkier. Should she secretly be a cow trying to make it in a world of cattle-enslaving milk-drinkers? Or actually planning her own bank robbery for later in the day? Either way, she’ll be great with a lasso (it was on the entrance exam to cowboy-bank school).

There’ll also be a parrot. Featherless, bequiffed, possibly wearing trousers belted too high up his/her torso, and motivated by biscuits. S/he’s going to be the lone survivor, limping off toward the horizon, in at least one plot-run.

Of all my characters, the one I spent least time thinking about was my protagonist. Early on, I decided that there were two directions to go in with him/her: either the character has a defined background and characteristics, or s/he has none besides working in a bank as a guard.

As far as I’m concerned, the latter seems perfect for interactive fiction. Entirely delineating the character through the player’s own choices, right down to gender, takes the medium to its logical peak, and should allow a player to place themselves in the role of a bank guard more easily.

Much more important than all of that – more important even than shallow cultural appropriation of kung-fu – is clothing. What would a sky pirate wear? Especially a sky pirate of the future? Is the need for a scary electric robot arm more pressing than what will happen in a heavy rainstorm?

Practicalities are obviously not going to be my biggest concern when I choose how to dress my pirates. They live on an open-top ship in the sky. I don’t think anyone is going to mind if I dress a 15th-century jerkin up with brass buttons from a Victorian captain’s coat.

I will make some concessions to verisimilitude though, such as covering up their 3D tattoos of bloody skulls and peg legs with nice mackintoshes. Other key pirate attributes will be mustaches (mustaches are fearsome), beards without mustaches (one of only two things more fearsome than mustaches) and toothlessness (the other thing).

Time to get pretentious. The bank is one of my characters. A big, spacious character, with lots of other characters running around inside of him, shooting bits off his walls. Probably he’s a bit annoyed by that, but I don’t think he’ll be able to do anything about it.

To help me keep track of which bits of the bank are going to be getting shot up and knocked over (not to mention where the mini-SWAT robots are going to crawl out of the walls), I’ve based its physical space on proposed plans for a Bank of Canada I found on the internet. I’ve scribbled phrases like “Gatling gun goes here” and “water fountain” all over it, and hope to add even more exciting features as and when my plots thicken.

Rob a bank (for research).

Declan Taggart might actually write interactive fiction at some point. In case he ever does, send him some pirate names on Twitter @NonsenseThunder. Puns are acceptable.