This is the fourth in an ongoing series about a fumbling idiot’s attempt to write some interactive fiction. You can find pieces one, two and three here, here and here, if this is your first time and you don’t want to miss out on the anti-vampires.

No. Actually, that’s a lie.

This week, I watched a lot of soccer. That’s the danger of working from home when there are two international football competitions on at the same time. When I did manage to squeeze in work on the setting of my interactive fiction, it was only by multi-tasking (i.e. doing it while overeating chocolate biscuits after my team got kicked out of Euro 2016).

For some reason, when I first started to think about my interactive fiction piece, I had a vague idea that it would just be in someone’s bedroom. My protagonist would be woken up by assailants in riot gear for reasons that are unknown but possibly discovered in the course of the fight. It would be tight and visceral, hopefully invoking some of the tension and brutality of The Raid: Redemption or maybe the apartment-block scene in Captain America: Civil War.

Recently, though, I’ve warmed to the idea of a bank job, which I stumbled on last time out while building prototypes. It’s a situation with a lot of cultural heritage to play with, from Ronald Reagan and Richard Nixon to inside jobs, SWAT teams, quadruple crosses and cowboys putting holes in bank ceilings with six-shooters.

The other scenarios I considered mostly revolved around even more of the tropes that I love and games should probably try to move away from (one of the scribbled out lines in my notebook is filled with just the word “TARANTINO” and more exclamation marks than I’m proud of). From that list – an assault on a medieval castle, a faction of militant Mormons, germs at war, a respectable dinner party gone wrong – only the idea of a ship-to-ship battle with pirates was still readable after I had drowned the page in black ink.

Good thing too. You can’t go wrong with ninjas, zombies or especially pirates. It doesn’t matter what you’re doing. Making interactive fiction or some 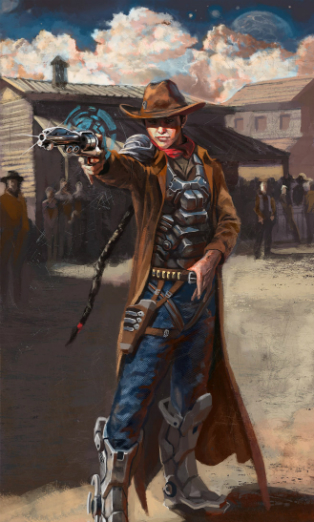 other type of video game? Writing a book? A TV show? Plumbing a bathroom or negotiating the economic relationship between an island nation and the EU? If recent cultural history has demonstrated anything at all, it’s that any work-related problem can be fixed by adding more ninjas, pirates and/or zombies. Everything after that is just smiling and sticking both your thumbs up.

So I took the bank idea and I smashed a boatful of pirates into it. Now, at first glance and even with the cultural value of pirates already firmly impressed into your mind, that might not make much sense. Pirates are limited in their range of influence to the things that are in the sea or, at best, fairly near it, which is a bit of an issue unless my bank is floating around on a giant raft or in the lower intestine of a whale.

At the same time, these chains can be removed. Pirates can be taken out of the sea, whether they’re then put on motorcycles, under the ground or in the sky. It’s been done before (probably best in The Edge Chronicles) and it’s still an effective image – a massive wooden ship, hanging heavy in the sky, defying gravity and all kinds of civil aviation rules.

It was around about this point – in between a plucky 2-1 victory for Iceland over Austria and the possible game of the tournament between Hungary and Portugal – that I realized that I was constructing the tone of my piece as well as the setting. Sure, I could have fought against the natural implications of a skyward pirate ship robbing a bank, but I’m a big enough fan of whimsy that it’d be my middle name if my real name wasn’t Winter Breeze and the alliteration didn’t come off as cheesy. I decided to double down on the fantasy elements and the eccentricity, putting the pirates up against some hi-tech bank-owning cowboys.

With every detail I add, the world makes a bit more sense to me. Characters and world-history get shaped. Questions about economy, clothing, technology and plot are asked and answered. I’m aware I’m probably overthinking this, given how short my game’s going to be, but I’m also hopeful that working the situation out in this much depth will make it easier to create distinct stories within it. Plus it’ll give me something to do until the quarter finals start.

Unicorns? Only the best games have unicorns (or at least things that are a lot like them).

Declan Taggart might actually write interactive fiction at some point. Still, it’s not too late to stop him. Get in touch on Twitter @NonsenseThunder and tell him why he’s bound to fail.