Part Two: Getting Tooled Up

This is the second in an ongoing series about a fumbling idiot’s attempt to make some interactive fiction. If you like, you can find my first piece here.

Number 3 took up way more time than I would have liked, meaning my beard is its normal haggard self and my belly still jiggling enthusiastically out over my belt. All that not exercising and ignoring my own face didn’t leave much time for making a game either, so all I have to show for my efforts over the last two weeks is an IF doodle you can find by clicking on this link: http://writer.inklestudios.com/stories/8b6x

I started this behind-its-time masterpiece by throwing words at a sheet of paper and pretending I was having ideas. This is what that sheet of paper looks like (below): 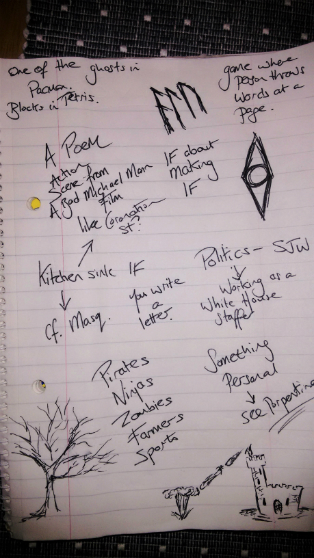 Is that legible? Maybe not. It doesn’t matter. Most of the concepts you can’t read on that page are far too involved for me to properly realize them as my first game; the rest are ill-formed enough that daylight shrieks and burns when it touches them, as if they were hideous conceptual anti-vampires (ooh. Anti-vampires. Is that something? No. It’s nothing). Even the good ones rely on or skills or knowledge of politics or history that I do not possess. “Can you do dialogue?”, you might ask, for instance, to which I would reply with an unintelligible proto-grunt.

By eliminating all the anti-vampires and ideas I just don’t feel equipped to tackle on that page, I am left with one notion that ticks most of the boxes I didn’t realize I had until now. I’m going to write a slow-motion fight scene. It doesn’t require too much dialogue; it can be self-contained and as long or short as I like; it can mix action and narrative; and, most of all, it fits with the sub-Tarantino level of cool I try to hit in every area of my life. I don’t know if a game like this has been done before – I did a quick search without turning up anything – but it seems likely. So what? Has it been done before with this level of incompetence? I doubt it. This is going to feel so fresh.

I also decided this week how I’m going to write my AAA-killer. This was surprisingly difficult. There are as many IF writing tools on the internet as there are grains of sand on beaches or victims of children saying “I don’t believe in fairies.” These are my thoughts on the ones I did look at:

Inform 7: There’s a lot of love on the internet for Inform 7 (mainly) because it allows users to code in a slightly stilted version of everyday English. It still sounds highly rule-based to me, and I think I would have to spend some time learning the particularities of the system before I could produce anything I would be proud of, though it does offer writers a comprehensive set of back-up tools.

Twine: Twine uses a visual interface that’s attractive to a beginner like me. It doesn’t seem to have much of a learning curve, though apparently it’d be possible to add my own stylesheets and HTML if I knew what they were. Quite a few choose-your-own-adventure-esque games have been made in Twine – definitely check out the genius Queers in Love at the End of the World, for instance, which cuts down its scope by adding a 10 second timer – and it lets game makers go further than strict choice-based systems by allowing any word to be hypertext. I like the sound of that malleability.

TADS: “Timbaland Ate Drake’s Salad”? “Tasty Ants Destroy Sadness”? I’ve no idea what TADS stands for, and the tool itself is just as impenetrable from afar. Its scripting language looks more complex than that of the others surveyed here, which puts me right off, but it does allow sounds and graphics to be added and, again, has a fully featured toolkit in support.

ADRIFT: In many ways, Adrift looks to be the exact opposite of TADS. Not only do I understand its name (though I don’t know what it has to do with IF), but it uses an almost entirely visual interface that appears a cinch to use. Without requiring the literacy of Inform or being as intimidating as TADS, ADRIFT claims to accomplish many of the same things. At the same, a bespoke platform has to be downloaded to run any game created using it, which seems enough of a faff to discourage me from using it.

inklewriter: This one has been put out by inkle, the people who wrote 80 Days, though they seem to have used a more advanced scripting language called ink for their own game. The layout looks very easy to use, though it’s only set up for CYOA-style choice-based games.

StoryNexus: Offering a similar level of pedigree to inklewriter, StoryNexus is the beloved digichild of Fallen London producers Failbetter Games. It uses something called storylets, which allow players to explore different modules of game content more flexibly than a strict branching story structure would.

ChoiceScript: ChoiceScript is tempting. It looks like a cross between traditional coding and something comprehensible, so I could pretend I am a real programmer and not just a person piecing together a jigsaw that he’s making up as he goes along. In many ways, it’s quite similar to inklewriter and StoryNexus, though with perhaps the most emphasis on RPG-like stat options guiding the story branches available to a player.

(Apologies if I’ve gotten anything wrong – feel free to correct me in the comments or on Twitter, and I’ll see about getting the piece updated.)

Others you might like to consider include Raconteur, Quest and Hugo, which are all popular, I couldn’t see much to separate them from the crowd, but I’m sure they’re excellent machines if they’re your particular bag, and you could also look at Guncho if you wanted to somehow incorporate multiplayer into IF.

From the list above, I like inklewriter best. Deep down, I know that’s just because I really enjoy 80 Days, but I’m going to blithely ignore that and rationalize my choice anyway. It’d probably be easier to model a slow-motion fight scene in a choice-based system, and I’m much more interested in that approach than in a parser-led one anyway, probably thanks to entrenched childhood traumas caused by Steve Jackson (and Sonic the Hedgehog) adventure gamebooks. inklewriter might be the most superficial of the engines specifically designed for choice-based games, but at this point I’ve not got much interest in complicating things with lots of statistics anyway. It should let me create something exciting and cool enough to satisfy even my juvenile sensibilities.

Next time on CYOA:

I guess I make a shooting game with words?

Declan Taggart doesn’t know what he’s doing. Please, help him. Get in touch on Twitter @NonsenseThunder and put him right, whether that’s with making this game or just generally in life. He needs you. Don’t let him down.

Queers in Love Reminds Us to Live and Love
Previous Post

Betas are the New Coke of Video Games