If you have even a passing interest in the Souls games, you’ve probably seen the ferocious debate about whether the games should have an ‘Easy Mode’ for struggling players.

Naysayers insist that it would undermine the core of the games, that the challenge is intrinsic to the experience. Proponents argue that the optional mode wouldn’t deprive hardcore fans of the ‘true’ experience, but simply allow more people to enjoy the games, regardless of their skill level.

For all the furore over the why, though, no one seems to be discussing the how. Games handle difficulty in a wide variety of ways, from tweaking health and damage values, to adding and removing mission objectives.

For the Souls games, though, none of the standard approaches really fit. The hardcore players have a point when they say mastering the rhythm of combat and learning through failure are crucial components of the games’ identities. Any Easy Mode, then, would need to preserve those elements even as it dialled back the brutal difficulty. Not a simple task by any measure.

That’s not to say it’s impossible; it simply requires a different tact. Rather than making the game easier, the focus needs to be on teaching the player how to overcome the obstacles to their success. This might seem obvious, but very few games treat their difficulty settings this way; most position the tiers as static from start to finish, rarely pushing the player to up the ante.

To be fair, training is hard to get right, as the torpid tutorials for many games prove. Let’s look at how the Souls games could do it, though, without smothering the player into despair.

A big part of Souls combat is timing. When enemies attack, you have a brief window in which to block, dodge or counter to avoid damage. For players struggling with the rhythm, the games could slow time during those crucial moments, granting more time to respond as well as highlighting when it’s best to do so. As players successfully evade attacks, the degree of slowdown could be gradually decreased and eventually eliminated.

On the offensive front, Souls is about identifying and exploiting the weaknesses of your enemies. Many foes are particularly susceptible to certain attack vectors: slow-moving enemies react sluggishly to attacks from behind, while shield-bearing opponents are often weaker on their weapon side.

To aid the novice player, the game could highlight the optimal angle of attack, perhaps by illuminating the relevant region on the enemies themselves. A dull glow on an enemy’s right leg could be sufficient 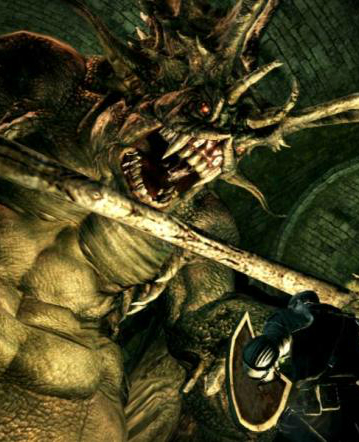 to teach players where best to focus their attacks, and both the size and intensity of the glow could be dialled back as players progress.

Smaller concessions could make a big difference, too. Falling to your death is a common frustration in the Souls games, one that modern games don’t really prepare the player for.

A warning when you’re near a drop-off would thus be a good way to encourage the player to pay attention to their surroundings. Subtly shading the appropriate edge of the screen or maybe just vibrating the controller would be sufficient to telegraph danger and teach the player that in a Souls game, the world itself can be your enemy.

These are but a few of the ways the Souls games could increase their accessibility without undermining their raison d’être. By educating the player instead of coddling them, an ‘Easy Mode’ can serve as a stepping stone to the raw Souls experience. Given the games’ emphasis on community, that’s something all Souls fans should get behind.