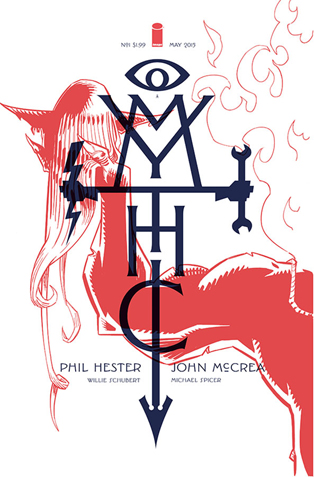 Mythic #1
(Image – writer; Phil Hester; art: John McCrea)
I am a huge lover of mythology. I’m fascinated by the stories of the Titans and the Gods, the different myths that explain mundane occurrences which we now pass off as everyday science, and the nagging feeling that a world populated by half-man, half-beast like creatures would make for a much more interesting day. Teaching a mythology class also helps, and students really respond to the myths because they’re a door to a supernatural world that we too often close.

So if you can’t see where I’m leading, I’ll be more concrete: Mythic takes these concepts and makes them as real as anything we know to be real. The premise of the series, however,  is better than the execution, and I hope that Phil Hester realizes the goldmine on which he currently sits because Mythic could be every bit as epic as the myths of the past, but it’ll need to be delivered with a bit more finesse to really succeed.

My biggest gripe with Mythic is how tongue-in-cheek it is, from the main character being recruited by a random stranger during an even more random and strange attack, to the humorous explanation of a drought and the mythical impotence that causes it. The comic needs little in the way of set up or foundation because mythology is pretty ubiquitous in our society that most people can muddle their way through the story, even with a cursory understanding of the premise.

But for the initiated mythologists,  Mythic is a frustrating read. It has so much potential, but it still needs to operate under first issue rules, namely establishing a mythos before that mythos can be fully utilized. Yet the the world has already been created for Phil Hester. Myths are thousands of years old, so why he chooses to hold back is really beyond me, even if the plan is to slowly reveal the world the uninitiated.

Because when John McCrea finally gets to exercise his chops, he delivers some pretty unique illustrations. The final page is intricately drawn and a good indicator of the way McCrea feels about his subject matter, but he’s kept restrained for the majority of the comic so that when he finally gets an opportunity to display his talent, the effect only makes the comic more frustrating because we know that we could have seen some of McCrea’s really unique designs, if only he were given the space and the story to do so.

I love the concept of Mythic, and I say it’s about time someone wrote a good mythology comic because the resource lends itself to a very creative medium. But Hester needs to show readers that he has an understanding of mythology too, because readers may not have the patience to wade through this kind of superficial storytelling if they’re waiting to get to the good stuff. Hopefully, issue #2 picks up the pace. 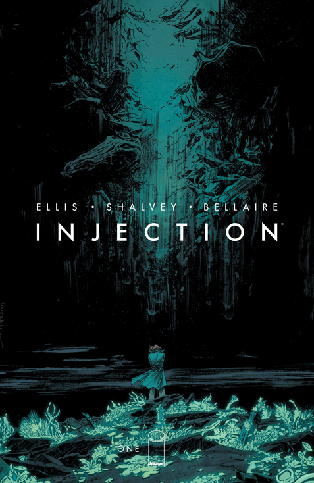 Injection #1
(Image – writer: Warren Ellis; art: Declan Shalvey & Jordie Bellaire)
Beginning a new story — either TV Show, movie, or comic book — works well when an odd mystery is established early on. Injection is well aware of this concept, and it executes it well. I’m intrigued enough to want to see more of Warren Ellis’ bleak supernatural story, even though it reads like an episode of Lost, in that it’s more concerned with building enigmas than solving them. I like Injection; I only hope that Ellis’s story doesn’t wear thin given the amount of mystery that he’s playing with.

Everything is not what it seems in Injection, and as soon as we’re introduced to the characters, we get the clear sense that Ellis wants to keep things as mystifying as possible, at least in the introduction. Ellis moves seamlessly between past and present, building a back story for his main character while also building a world of unbelievable possibility, but neither one of these really gives us a clue as to what Injection is all about.

Critically speaking, some of the characters feel like knockoffs of other famous characters (like Constantine, for example), and Ellis definitely enjoys vagaries over specifics, but there’s something bubbling beneath the surface in Injection, something that hints at a deeper and very satisfying conclusion that will be doled out in tiny morsels, only enough to whet readers’ appetites. When Ellis finally lets us in on one of the secrets in the last five pages, we definitely get the sense that anything could happen, and that Ellis, as the architect, is okay with this — and that he has a plan.

The story is pretty relatable too in that it has equal parts Science Fiction and Supernatural occurrences, frustrating in its terseness, and yet intriguing enough to bring readers back for more.  The end of the issue is really where Ellis sinks his hook, and while the rest of the comic isn’t bad, it’s meandering nature only lends itself to frustration becuase it’s clear the characters have all been affected by the jobs they assume, but why or how remains the elephant in the room.

Injection definitely has many intriguing moments, and the mystery — for all its perfunctoriness — is enough to keep me engaged, but I’m hoping that Ellis moves us more into the supernatural world so that we can at least get a glimpse of his larger picture and therefore keep engaged in a very vague, enigmatic setting that requires a little patience, and a little bit of trust. 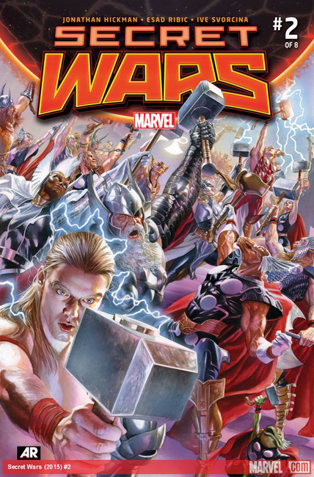 Secret Wars #2
(Marvel – writer Jonathan Hickman; art: Esad Ribic)
Secret Wars is all about the inverse of the Marvel Universe. It’s like Hickman has a clean slate but very familiar chalk with which to write becuase the comic has a lot of solid characterization, and even though it’s word heavy, the issue never feels sluggish or full. In fact, I would say that Jonathan Hickman has written one of the best comics of the year, and given Esad Ribic’s stellar art, we’re witness to a solid series that has al the tools necessary to be a hit for Marvel.

What’s most impressive about Secret Wars #2 is how much like a narrative the story reads. The comic has page after page of copious dialogue, but none of it reads poorly, nor does it distract from the overall intent of the series. I loved every page of this comic because even at its most court-like, it gives readers a familiar yet unsettling view of the Marvel Universe if it were controlled by Victor Von Doom. Hickman seems intent on getting his readers used to the world in this issue, and he succeeds with aplomb. Very early on, in fact, you know the kind of world that Doom created and based on the way his subjects act, you have a good sense of how much this new timeline has altered the characters we know so well.

And these new versions of character are where Hickman does his best work because he captures the essence of the characters, even if they’re completely different versions of themselves. It’s fun to read the comic and see the new ways characters act, and how Hickman can easily identify the character for us while still taking that character’s greatest weakness and exploiting it the way Doom would.

The same can be said of Esad Ribic’s art. The man knows how to draw darker, more sinister versions of heroes and villains, so that we’re never unsure of the person at whom we’re looking, only surprised to see how much they’ve changed given a universal overhaul by the most self centered villain the marvel universe has ever created. Ribic’s art is gorgeously detailed, thinly inked and full of copious amounts of detail. The cinematic quality to the art gives the visuals a vibrancy and life that makes the new Doom World palpable.

I loved reading Secret Wars #2. It’s a hefty book, and a hefty read, but it doesn’t feel like it. Hickman has a fluid style of writing that allows the story to organically evolve so that a book in which “nothing” happens (as in their’s no action) still can stand among other books that rely too heavily on action and not enough on story. Hickman writes with confidence, though, and it’s clear that he’s been planning this for a very long time.

I, for one, couldn’t be more excited to see where he takes us because if issue #2 is any indication of the depth and intrigue the series offers, sign me up for as much of it as possible.