Hellboy is over. I type that and I still have a hard time believing it. The book’s publishing schedule has never been particularly consistent. We’d get a series here, a few one shots there and maybe a flashback cameo in Abe Sapien or BPRD in recent years. Mike Mignola has been writing and drawing Hellboy on and off since 1993. Sure, he hasn’t completely written off coming back to the character in the future, but Hellboy In Hell # 10 is unmistakably the end of the big red guy’s journey.

Ever since Hellboy: Seed of Destruction # 1, Hellboy’s been fighting against his purported destiny as the Beast of the Apocalypse. He died instead 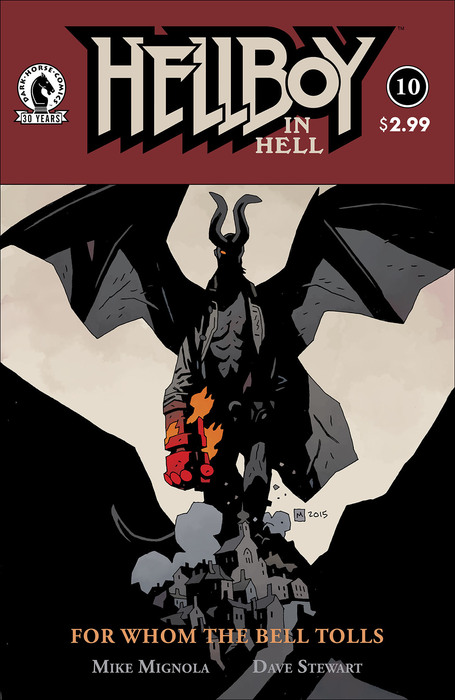 taking after his human heritage as an heir to King Arthur and he paid the ultimate price for it. Mignola had intended Hellboy In Hell to be a book where he could tell smaller stories that weren’t constrained to our plain of existence. He did just that, but Hellboy still had a journey to finish. So, Mignola decided to end that story and spend the next year focusing on painting.

Hellboy In Hell # 10 would feel rushed in the hands of lesser talents. As the story unraveled, Mignola and his partner in crime, Dave Stewart, have shown Hell as a gray, bleak landscape. The only hints of color are fire and blood. Earlier in the series, Hellboy killed Satan and Hell fell into chaos. Now it’s time for the big red guy to finish the job and so the Beast of the Apocalypse lays waste to Hell.

The clever thing about this issue is that it isn’t told from Hellboy’s perspective, but from the point of view of a demon we saw earlier in the series. He tells his grandmother as Hellboy storms Beelzebub’s castle. He punches, kicks and stabs his destiny until it lay bloodied and dead at his hoofed feet.

Mignola mixes his atmospheric and sometimes ambiguous layouts with some bombastic fight scenes where his love of Jack Kirby is on fill display! The quieter moments build tension and dread while also allowing the reader to pause in reflection. Mignola’s art begs the reader to examine the page. The final moments bring longtime Hellboy readers someplace familiar.

Hellboy In Hell # 10 isn’t a comic for someone who just wants to drop in and see how it ends. It’s the end of the story Mike Mignola wanted to tell and he tells it to his readers in challenging masterpiece. I’m going to miss Mike Mignola’s cartooning. He’s mastered his lines, telling more with less. Every image in Hellboy In Hell is striking, and together, they tell a wonderfully weird tale.

I loved the Power Rangers as a kid and have not been shy about my joy that the original series was being revived as a comic book. That being said, I had no idea what I was getting into when I picked up Mighty Morphin Power Rangers: Pink #1.

What’s really been special about the MMPR comics is the careful balance between new and exciting stories and respect for the existing canon. MMPR: 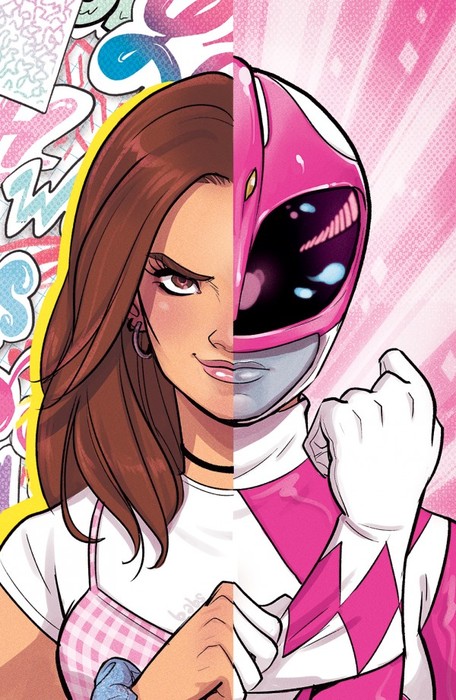 Pink  finds a nice narrative groove to settle itself into. Because Kimberly’s powers were not transferred via magic sword on the show, she can temporarily be re-powered for this comic run. And it works.

Kimberly has always been an underdeveloped character. In the original show, and to a point in the mainline MMPR  comic, Kim was defined by the male characters around her. Rarely did she get the spotlight in way that didn’t include a romantic subplot or becoming a damsel in distress. Now, in her own book, she not only gets to do the butt kicking but she also gets to show that she’s always been able to carry a story.

Brenden Fletcher and Kelly Thompson deliver on making Kimberly seem almost like Kate Bishop, of Hawkeye Fame. The bow has always been Kimberly’s trademark weapon, but without her Ranger powers in the opening pages, she seems more tactical than ever. Kimberly’s time away from the Rangers doesn’t seem to have dulled her skills much and there’s a real sense of satisfaction in between the panels as she suits back up. Both times.

Two suit ups is a rarity in Power Rangers stories, and Fletcher and Thompson pay both of them off beautifully. Having Kimberly suit up with a real bow and arrow to take back a town from vaguely Lovecraftian French sea monsters really helps to define her both as an ex-Ranger and as a badass in her own right. Later, when Zordon returns her powers, we’re again treated with a brand new Ranger suit the likes of which we’ve never seen.

Artist Daniele Di Nicuolo does fantastic work with both sequences. MMPR: Pink’s new Ranger suit pulls many different elements together and makes a powerful statement: This is going to be different. The new suit is perhaps the most aggressive design of any Power Ranger ever and certainly the most aggressive contemporaneously.

Altogether, MMPR: Pink #1 doesn’t tell a fascinating story or introduce any really critical characters but it doesn’t need to. Instead, It lays amazing groundwork for the remaining five issues.

I haven’t been following the Aliens and Predator Dark Horse comics for a while, but boy did I read the heck out of them as a teenager. They’ve always been one part homage/adaptation/rip-off of the movie source material, and one part proving ground for writers and artists to work on some cool science fiction stories. In the 90’s, amidst the mindless steroid and pouch superhero options mostly being offered elsewhere, the comic books related to Alien and Predator were an interesting break. Sometimes they were even intelligent and inventive science fiction stories. In Prometheus: Life and Death #1 it looks like they’re going in that direction (inventive SF), although it may also be “Frankenstein’s Monster God Rampage”!

Continuing from the events of Fire and Stone, we see a classic set up as far as the stories and comics based on these movies go. A group of humans 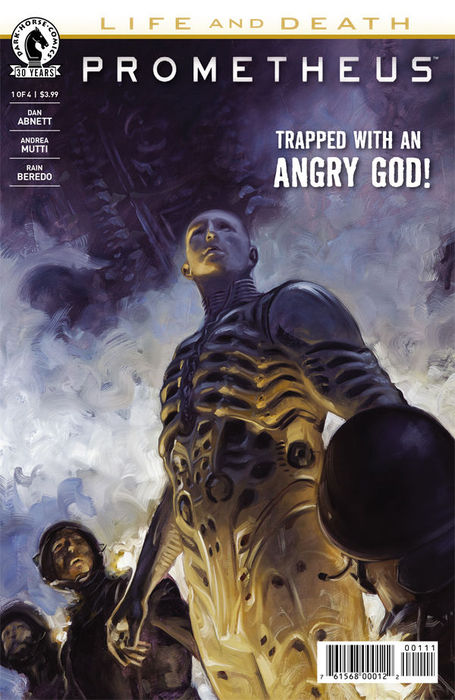 and at least one android are on a derelict ship. They’ve encountered a group of Predators, some Xenomorphs, and in this issue they’ve now encountered a head-crushing Engineer. The humans and synthetic human initially react as if they’ve seen a god, but then panic sets in and they realize that they’re stuck with a giant technologically advanced monster and run. It’s a pretty simple set up, but could pay off well depending on which direction veteran cosmic comic book writer Dan Abnett takes things in.

The art by Andrea Mutti is mostly great, and serviceable to the cosmic setting. There are a lot of excellent exterior shots of the Engineer’s ship and the Marine’s ship, and the tech is rendered very nicely too. The Engineer looks slightly awkward, weird and gooey most of the time, which helps to make him look more monstrous and less like a generic bouncer at an H.R. Giger bar.

Which brings us to the big baddie from the movie that the series is named after. With the Prometheus name we are getting a story featuring at least one of the members of the Engineer/Space Jockey race. So far they’ve only really been represented in one polarizing movie, unlike the Predators and Xenomorphs who have decades of source material to draw from and reference. Some may argue Ridley Scott himself may just be making stuff up as he goes along in regards to backstory for these characters, and that the slate for what the deal is with these guys is pretty clean. The first movie ended with what was left of the survivors blasting off towards the Engineer home planet in one of the Engineer’s giant metallic croissant-shaped spaceships, and this issue kind of ends on a variation of that.

The concept of a monstrous but intelligent godlike creature could potentially be a neat twist on this universe that hasn’t been explored yet. Will Dan Abnett take the terror in a new direction utilizing an alien character that hates humans, or will he make them just a variation on the Predators? How will Predators and Engineers interact, and is there a correlation between the two? How do we squeeze some of those aliens in? Will the humans serve more of a use in the story other than for cannon fodder and POV narrative? I’m actually curious to find out!

Thanks to Dark Horse Comics for providing Unwinnable with an advance copy of this issue, Prometheus: Life and Death #1 arrives in stores this week!

Office of the General Counsel Episode 4 – Get Money Get Paid