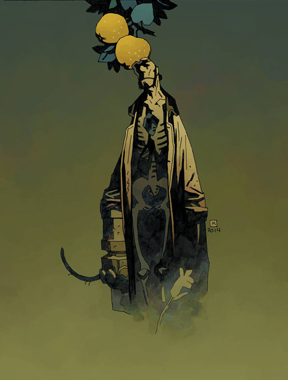 We interrupt this week’s edition of Last Week’s Comics with an advance review of Hellboy In Hell #7.

I just finished reading Hellboy In Hell #7. Mike Mignola, Dave Stewart and company continue to deliver the most incredible horror comic of our time. While both BPRD and Abe Sapien are set in our dying world, Hellboy In Hell exists in a setting all its own. Mignola’s built this realm for decades but these first seven issues are the first time the Hell that birthed Hellboy has been explored.

Dark Horse Comics will be publishing a two part Hellboy tale, “The Hounds of Pluto,” this August. Hellboy In Hell #7 begins with a vision of England and the start of a new world. The changes alluded to at the beginning of this issue reflect the events going on in BPRD: Hell on Earth and Abe Sapien. While BPRD is a smart but more action-oriented look at the apocalypse, Hellboy’s vision in this issue is a more somber and atmospheric reflection on the end of the world (though Hellboy still gets to punch something).

The opening of this issue is one of the most beautiful collaborations between Mike Mignola and Dave Stewart I’ve seen. It looks different than anything they’ve created in a Hellboy comic. Hellboy lays pale and sick, in danger of dying again. As he slips into unconsciousness, Big Red has a vision of the world he left behind. Stewart’s Hellboy colors are usually stark and full of contrast but this dream sequence is lush and ethereal. It’s stunning! 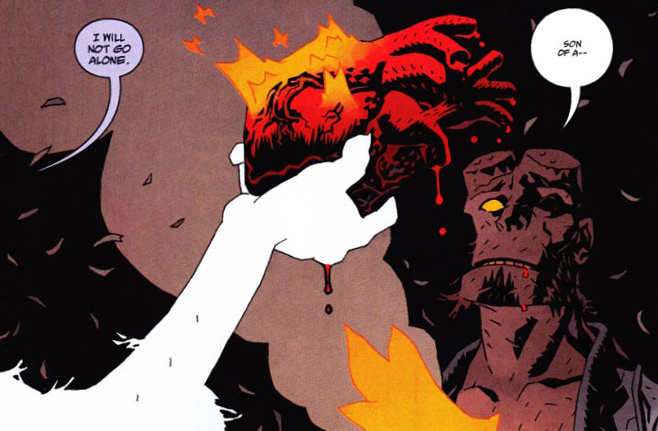 Hellboy In Hell #7 revisits characters and imagery from Hellboy’s death in Hellboy: The Fury #3. Characters we haven’t seen or heard from since re-appear, some in the vision and some not. Mignola also returns to the heart. In some ways, this issue is about what drives Hellboy. He’s the most free he’s ever been, but he’s never been so alone. He’s separated from Abe, Liz. Alice, Kate and Roger. All he has is whoever he runs into in his travels.

Here at Team Unwinnable, Hellboy has an always will be close to our hearts. We love the big guy and the horrors he’s battled over the years. I already have Hellboy In Hell #7 on order at my shop and you should too. It may only appear sporadically, but it’s the most haunting and beautiful comic on the stands.

Through a Lens, Digitally

A Season in Hell