Brian Bannen is off to Coast Guard boot camp, so he won’t be in communication for a few weeks. So Ian and Stu (and anyone else who wants to join the fray) will be covering for him while he’s working to make our little corner of the world a safer place. Without further ado, welcome to the All New, All Different Last Week’s Comics!

Motorcycle Samurai Issue Zero is writer and artist Chris Sheridan’s first published work, and it is impressive. Premiering as a Comic Con International special release, Motorcycle Samurai blends American Western tropes and Samurai cinema for comics the way Magnificent Seven or Kill Bill do for film. Sheridan takes advantage of digital comics as a medium, uses it to enhance strong and subtle storytelling and delivers a damn fun comic. 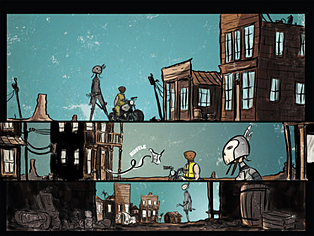 The book has a Mad Max meets Shaw Brothers feel. Set in the Badlands, a barren wasteland filled with empty buildings, a spigot and foxy bounty hunters, the comic starts as a mysterious woman on a motorcycle stops to get a drink of water after a bender in the desert. She has a prisoner, a man named Happy, riding on the back of her bike. He has a burlap sack on his head with a smiley face drawn on it. It’s a design choice that, through Sheridan’s storytelling, belies a sense of impending dread beyond just the ghost town these two characters are in. Also, it’s just creepy.

As the woman, White Bolt, drinks from the spigot, she is suddenly surrounded by a group of bounty hunters who call themselves the Hornets. I can’t help thinking of Uma Thurman delivering the pitch to Fox Force Five in Pulp Fiction as the Hornets introduce themselves and their specialties. Of course, one is good with a knife. They want the bounty on Happy’s head. What follows is one of the most fun fights I’ve read in comics this side of Chris Samnee’s Daredevil.

And that is where the digital comics medium comes into play. Instead of panel design – and I’m not sure if there’s a word for it yet – it’s more like a screen design or a platform design, in which Sheridan’s work expands from traditional comics translated to digital into an experience only digital comics can deliver. The reader isn’t simply swiping left to right and getting reveals the same way. No, the reader will swipe left to right, but the panel reveals could move in a right to left sequence, or bottom to top, or left to bottom – Sheridan and the designers employ all manner of reveals that enhance the story.

Whether it’s water pouring from a canteen, a piece of paper swooshing through the barren streets or a flutter of hair, Sheridan makes use of Guided View by providing an illusion of movement, similar to animation but distinctly comic book. Presented via Comixology’s Guided View Technology, Motorcycle Samurai plays to the digital comic’s strengths as a medium like its predecessors, Power Play and Thrillbent’s Insufferable and Moth City. It’s a fascinating use of the format and I look forward to seeing more of this book in the fall. Yup, Motorcycle Samurai is a blast! 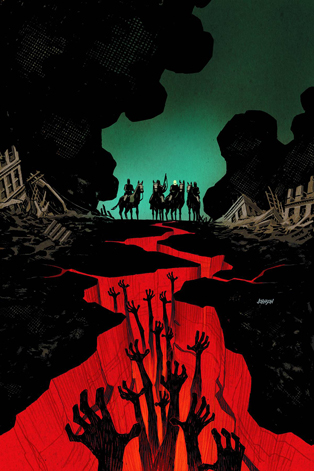 Somewhere along the line, Mike Mignola went from writing the pulpy adventures of a big red devil that punches monsters to creating a rich and terrifying world on the edge of a supernatural apocalypse. The transition was so gradual and so filled with digressions and side stories that I was almost unaware of the change. And here we are, in a world were Great Britain is besieged by witches, giant monsters wreak havoc in the United States and the devil himself lie murdered in his throne room.

Despite the epic scale of these events, the Mignolaverse always scales back to tell the stories of individuals. In the most recent arc, “Wasteland,” we follow the disembodied medium Johann Krauss as he leads a small team of BPRD troops to investigate the destruction around Chicago and possibly rescue another BPRD team that fell off the radar. They bear witness to a post-apocalyptic landscape populated by not only vicious monsters and hideously mutated humans, but also the people who have survived – a boy who misses his mother, or a homeless  trio who have it just as bad as they did in more civilized times.

In this, the final issue of the storyline, Johann and company finally find the missing BPRD team and they aren’t just another group of random agents. Readers met them earlier in the year, in a seemingly unconnected story called “The Abyss of Time.”

“The Abyss of Time” is exactly the weird digression that makes the Mignolaverse so special – and surprising. A small team of BPRD agents investigates a dilapidated building in Chicago and finds a storehouse of occult items. When Agent Howards accidentally touches a strange sword, he falls into a coma and relives the life of one of his antediluvian ancestors, a warrior king embroiled in a war against the degenerate Cold People. His BPRD colleagues all meet a bad end, leaving him to dream of prehistory until Johann’s team discovered him.

In an unexpected turn, Howards is somehow still alive and, when the team is attacked by a band of mutated humans (who are not unlike the Cold People of the distant past), he wakes up to carve a bloody swath through. King Conan would be proud.

BPRD is just the right mix of the uncanny and the human. Both “Wasteland” and “The Abyss of Time” prove that a story can go in wildly disparate directions and still come together in the end. No matter where it goes next, I am going along for the ride. 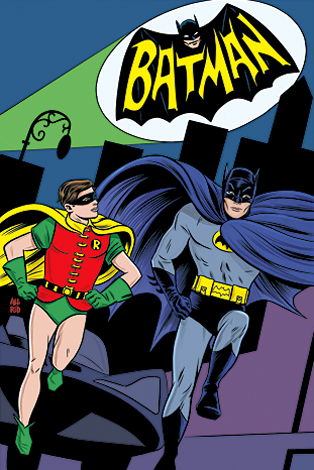 Batman ’66 premiered in June as a digital first comic, part of DC Entertainment’s DC2 initiative. Written by Jeff Parker and drawn and colored by Jonathan Case, Batman ’66 is inspired by the campy ’60s Batman TV series. The character designs, look and overall feel of the book evoke a heightened version of that series. By utilizing Comixology’s Guided View technology, Batman ’66 utilizes that feature to pop the sound effects title cards made so famous in the TV series between transitions. It heightens the action and makes for a fun callback to the series. Honestly, it works pretty brilliantly as a digital book. But how does the print version fair?

The print version of Batman ’66 # 1 collects the first three digital chapters of the series, “The Riddler’s Ruse.” Jeff Parker’s script and Jonathan Case’s art meld to form a fluid and fun adventure in both digital and print. The story and the action are the same, but they are two very different experiences. The storytelling in both mediums is seamless.

This issue feels like an episode of the classic TV series, only with a massive budget. Batman battles Riddler on a biplane, Catwoman opens a club and Batman’s cape turns into a glider! The set pieces in this series are psychadelic – the swingin’ ’60s design aesthetic makes for one of the most vibrant Batman comics in a while. And all of this moves the story forward.

Much like the TV series, there is a bizarre logic to the mysteries that require Batman to exposit some nugget of obscure trivia to Robin, which leads to them discovering the convoluted meaning behind the Riddler’s missives. Honestly, this comic is worth it for the scene where Case visualizes Batman and Robin solving the riddle. It’s so much fun and translates perfectly into the print version.

Batman means a lot of things to a lot of people. For a lot of fans in my generation, this was the first Batman we knew thanks to syndication, and he’s a Batman that, aside from Batman: Brave & The Bold, has been absent for far too long. Don’t get me wrong, I am digging what Scott Snyder and Greg Capullo are doing on Batman, but with Batman Inc. coming to an end, it’s a relief to see the Dynamic Duo counterbalance the Dark Knight in a weird, fun Batman comic.