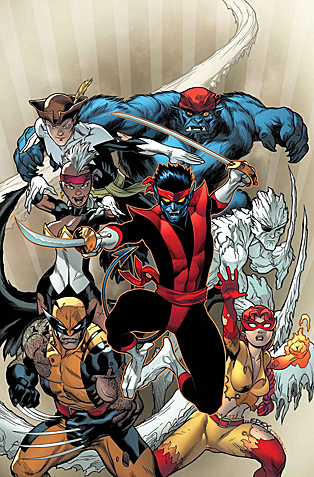 I’ve been reading the X-Men for a long time. “Dark Phoenix Saga”? I’ve probably read it more than Watchmen. The New Mutants original graphic novel? It’s been on my bookshelf longer than my copy of The Adventures of Huckleberry Finn. “Apocalypse: The Twelve”? Ok, I was out of the loop by then.

I stopped reading the X-Verse right around the “Phalanx Covenant.” I checked in here and there, but didn’t regularly read an X-Book again until Morrison’s New X-Men and pretty much stuck with reading one X-Men series since then. 2014 was the first time in a long time where I was engaged with the X-Men as a line.

Here’s the lowdown on 2014. Jason Aaron and Ed McGuinness resurrected my favorite mutant, Nightcrawler. Brian Michael Bendis, Stuart Immonen and Sara Pichelli changed Marvel Girl’s destiny in the Guardians of the Galaxy/All New X-Men crossover, “The Trial of Jean Grey.” Greg Pak and Victor Ibanez are delivering the compassionate and confident Ororo Munroe that made me love the character back in the post-“Mutant Massacre” days over in Storm.

The merry mutants are in a giant soap opera. I haven’t even touched on the disastrous events in Magneto and in Uncanny X-Men or the death of Wolverine or even Longshot Saves the Marvel Universe! The X-Men books had the right balance of action, melodrama and character-driven storytelling this past year, and 2015 looks to be even better with G. Willow Wilson writing X-Men, the upcoming Secret Wars: X-Men ’92 series and the Last Will and Testament of Charles Xavier finale.

It looks like I’ll be buying a lot of X-Men comics this year, too. 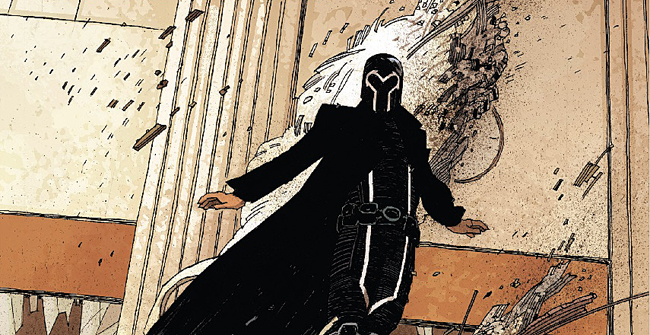 Hellboy
I expanded my comic book palette in 2014! I didn’t even mean to – it just seemed right. I’m really proud of myself, because anyone who knows me knows that I’m stubborn and actually pretty closed-minded when it comes to music and comic books. 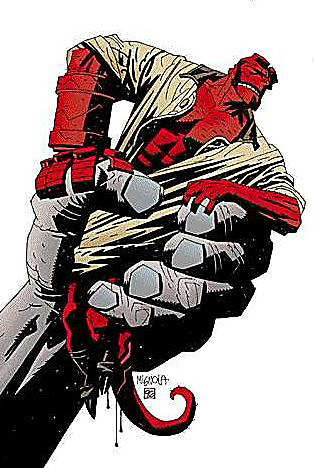 For most of my comics-buying life, as a child and adult, I’ve not strayed far from the Batman universe. I recognize this obsession is unhealthy, but hey, it’s better than it used to be. I occasionally ventured into other universes (X-Men when feeling superhero-y, various crime/noir titles for some snappy back-talk, Punisher if I’m feeling unhinged – now that guy is a crusader for “good” who could give Batman a run for his obsessed/megalomaniac money.)

Hellboy has long been in my periphery, but in 2014 I poked my finger in his world and liked what I felt. I’ll never know why I waited so long to check out the “Mignola-verse,” as my friends affectionately refer to it. Maybe I had a hard time wrapping my head around Hellboy’s giant right hand? A small part of me regrets taking so long, but the rest of me that gets to experience Hellboy and his Bureau for Paranormal Research and Defense associates for the first time now is totally geeked.

I always imagined the Hellboy books would read like something between Groo and Lobo (fun enough in their own right, but not for me.) Nothing specifically made me think this, I just sometimes get an idea and it stays fixed, for better or worse. Usually worse.

I don’t have anything new or interesting to say about Hellboy, other than: read it. Read it all! Those who have already read the books – basically everyone in the comic book world but me – know the fun of each adventure, the fear every time a new demon explodes out of the ground and the sadness that everyone in the B.P.R.D. carries.

There’s plenty of action and adventure in Hellboy’s world, but Mignola and his artist cohorts keep things understated, coming from the “less is more” school of storytelling. I get the feeling of watching an old comic book cartoon-movie, where the characters are stuck in a pose, then pulled along a still background. My favorite touch might be that most of the stories are in mini-series form, with sometimes long stretches between books. Quality over quantity!

Now, I’m off to find out more about some guy named Lobster Johnson… 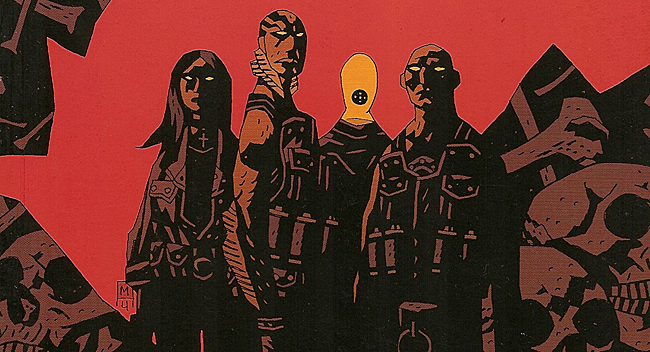 I’ve been reading more independent comics in the last couple of years. In some cases I’ve been catching up with indies that are now being collected. Part of that is thanks to great New York City comic book shows like MoCCA and Comic Arts Brooklyn, which put more of an emphasis on independent comics and their creators, especially independent comics created locally. For a year now I’ve been seeing this comic book called Copra, and while I was intrigued to check it out they never had the first issue, as it sold out a long time ago. As more and more attention from various media outlets has been given to Copra this past year, I learned that it’s a comic created locally that’s published by Bergen Street Press, the publishing extension of the excellent Bergen Street Comics store in Brooklyn. 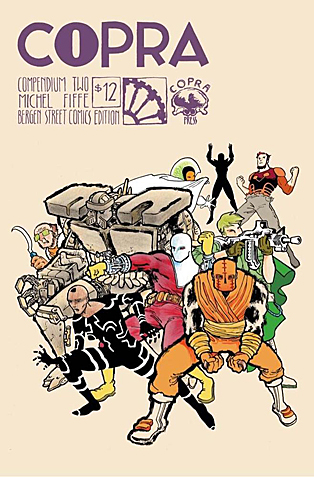 On the surface the series, written and drawn by creator Michel Fiffe, seems like a thick homage to the classic DC Comics series Suicide Squad. The more you read, the more you realize how Suicide Squad is just the basic blueprint for something far more ambitious. Copra is not only one of the most action-packed and wildly imaginative new comic series that I’ve read all year, but it also manages to bring you up to speed with the characters in this established universe and care about them as if you’ve been reading this series for a decade.

The story begins with the current iteration of the team transporting a good old-fashioned MacGuffin head with a lightning bolt artifact stuck in it, seemingly of alien origin. Almost immediately they are attacked by other super-powered beings, and some members of both teams are introduced and killed mere pages later. Not only does this call back to Suicide Squad but also reminds me of Erik Larsen’s Savage Dragon, with the way a seemingly endless stream of super villains and heroes are introduced and killed off. The downside to this is when a character you like is killed off, but have no fear there are more where that came from.

One major point I’d like to comment on is the art of this series. Fiffe has this fantastic style that flows effortlessly, a tough thing to pull off with action comics. The colors and line work have a life all their own, similar to guys like Frank Miller at the top of their game back in the day. The character designs do a wonderful job of calling back to established characters while also being something on their own. My favorite characters are the ones that are alien in origin, because Fiffe can really go wild with their designs, from angular to disgusting. One villain in particular is Dy Dy, a character that reminds me of a combination Mother Brain and Krang with her gross ridiculous appearance.

At this point, Copra is up to 18 issues, with Round Two collecting issues 7-12 coming out this month. If you haven’t hopped on board for this wild ride yet I highly recommend picking up Round One ASAP! I’m not even saying that it’s “good for an independent comic series” – Copra is simply a great comic book series that also happens to be independently created, written and drawn by one guy. Michel Fiffe is doing some wonderful stuff here, and it’s still early enough to hop on board with this new exciting comic book universe.

If you look up what “copra” means, one of the definitions is that it’s the dried meat or kernel of a coconut used to extract coconut oil. In a weird way Fiffe did that here, extracting something from a source (in this case John Ostrander’s Suicide Squad, among other comics) and making something so much more. While I enjoyed some stuff put out by the Big Two this year (specifically Marvel), I enjoyed a lot of stuff put out by other sources. Additional things that I hope to write about this year are other indie series like Tales To Behold by Paul Hoppe and Hip Hop Family Tree by Ed Piskor.

One that Ian and I have talked about is Blades & Lazers by Benjamin Marra, which is a series that is about exactly what the title suggests!

In other words, I’m looking forward to discovering more new and great things in 2015, while also digging into my discoveries of 2014. To paraphrase a guy who was the voice of one of the Big Two companies for decades: “Make Mine Comics!” 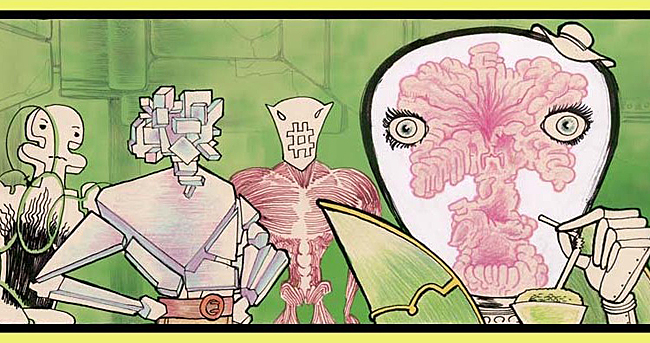