The Visual Novel (VN) is quite the chimera. Part game and part graphic novel, the VN seems at first an answer to a question nobody asked. But, in the same way the iPad was initially deemed a dunce of all trades before ushering in the tablet age, the VN is much more than just the sum of its parts.
There’s something about the interactivity, minimal though it is, that makes all the difference. Compared to a book or comic, a VN feels like a more collaborative experience, one driven by the reader as much as the author(s).

This is especially true when you have to click the actual line of dialogue or prose to advance the story. Selecting the line elicits a sense of directorship, a simple corollary for the action performed. Even if there are no branching paths or alternate dialogue options, it feels like you’ve made an active decision.

This phenomenon is born from a few factors. The first is the principle of cause and effect; from Newton’s first law to the scientific mantra of test and observe, our civilization runs on rules of deterministic behavior. Naturally, then, we find satisfaction in seeing cause become effect. It bolsters our understanding, and provides a sense of control over our surroundings. When we click a line of dialogue, the effect of the progressing narrative feels rewarding. We know a little more of the fiction and feel more in control of our fate – regardless of whether we are or not.

But how is this any different to paging through a book?

The answer lies in our perception. In a book, the entire narrative is available at any time. You can peek a few pages ahead, or read the ending before you even start. It is always clear that the book exists independent of the reader, pre-written and immutable.

VNs aren’t that transparent. The story is typically locked behind linear progression, the future veiled in mystery. This structure maintains the illusion of temporality, preserving the notion that your actions are constructing the narrative rather than just navigating it. 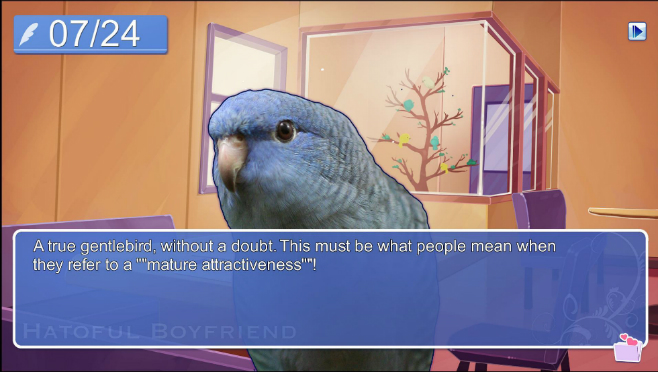 Many VNs spice up their dialogue by allowing you to pick from multiple responses. The scene will usually play out identically regardless of how the reader responds, but that doesn’t mean the act of choosing is worthless. The illusion of choice – commonly referred to as the illusion of control – plays a critical role in our lives. We pride ourselves on possessing free will, maintaining the notion that we always have a choice, no matter how dire the situation.

Making a choice, even a trivial one, lets us feel like we’re in control. VNs leverage this to make us feel like active participants with power over our fate. Even when it’s an illusion, even when we knows it’s an illusion, the act of choosing personalizes the narrative, and provides a sense of ownership that traditional stories do not.

There’s a good reason Visual Novels are sold alongside video games. They might not feature complex controls or demand twitchy reflexes – they might not even be all that interactive – but the sense of personal investment they generate is Gaming 101. With just a simple click, VNs turn fantasy into (virtual) reality.