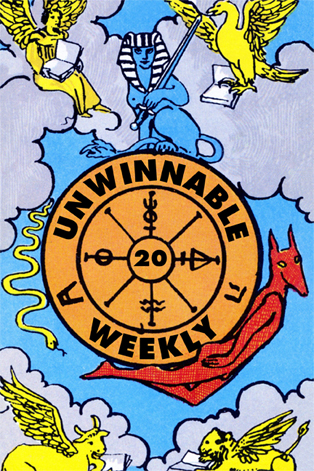 Whenever you try to trace its outline, it changes, splits, grows, sloughs off parts and creates new ones. It shrieks and wails and blubbers and screams incoherently. It flails appendages blindly, independently of each other. It is immune to reason and it seems to want just one thing: to consume.

If you think I am going to talk, yet again, about John Carpenter’s The Thing, you’re mistaken. I am talking about GamerGate.

I will spare you the details of its origin and its history. If you’re reading this, you already know. It isn’t worth recounting. This movement that claims to be about ethics with one mouth and harasses women out of their homes with another. It espouses a desire for truth and honesty while distorting facts to fit elaborate conspiracy theories. Its partisans shout that they want change, but GamerGate will never change anything. It will never make anything. It cannot create.

All GamerGate can do is destroy.

The way it has tried to destroy the lives and careers of Zoe Quinn, Leigh Alexander, Jenn Frank, Dina Abou Karam, Anita Sarkeesian, Brianna Wu and more. The way it systematically silences discussions it disagrees with. The way it seeks to rob journalistic websites of advertisers through a coordinated, bad faith letter-writing campaign. The way it exhausts its opponents with endless, senseless gibbering. The way it fills us with rage we’re too reasonable to dump out on strangers.

It whispers with a falsely sweet voice; it tries to sooth, like a siren, like a leucrocotta, like a manticore. We have to stop listening. We must not fight it on its own terms. It sings a carrion song to cover up the roar of a thresher. All that awaits us there is a storm of teeth and claws.

It is dying. That is why is mewls so loudly. It is desperate to lure fresh prey into its clutches. Let it starve. The world knows what it really is. We know what it really is. Let it crawl out of its hole, into the light. Let it come to us. Or else, let it stay down there in the dark. All the hate and delusion will focus inward, devouring itself. It will be hard at first. The sounds coming from that pit will be horrible.

But eventually, there will be silence again.

We’ve got four great stories for you this week. First is Luke Pullen’s amazing look at Frank Herbert’s Dune and the games it inspired. Shawn Alexander Allen gives us a look into last year’s Practice conference at NYU Gamecenter – if this doesn’t make you want to go to this year’s in November, nothing will. Marjorie Jensen draws comparisons between Tarot and Poker in our cover story and Space Marine Aurelius Ventro is back from the future with another advice column.

Got something to say? Say it to my email at stuhorvath@unwinnable.com.

This is a reprint of the letter from the editor in Unwinnable Weekly Issue Twenty. You can buy Issue Twenty individually now, or purchase a one-month subscription to make sure you never miss and issue!