Unlike many other mental disorders, specific phobias and fear responses are actually somewhat well understood by the medical community. About 9% of the US population has a phobia. Those with phobias experience some combination of the symptoms including heart palpitations, crying, panic attacks, and crucially, avoidance. Most people with specific phobias (such as myself) reinforce those phobias by simply avoiding the situations where someone might encounter whatever they are afraid of.

I have arachnophobia. In fact, I have such severe arachnophobia that even typing the word out made me have to pause and make sure that there were no spiders around me. I just had to do it again. Seeing a picture of a spider or even a good rendering of one is enough to trigger an intense and sudden fear reaction in me. Trouble breathing, a cold sweat, itchiness, and sometimes either a total lock up of all my limbs or a rapid flight response are typically on the menu when the crawlies are around. I’ve left rooms and buildings screaming before, and I freely and readily admit that my reactions to spiders are outsized compared to the threat they pose to me.

Annoyingly, spiders come up rather often in the games I want to play, often with debilitating consequences for me. It began in 1999 with Indiana Jones and the Infernal Machine. There was a spider in the very first level. It could easily be killed and was one of the weakest enemies in the game. I never finished that level. Not only did I not finish, I threw myself away from the computer and had to go into the other room until I calmed down. I later hid the game disc.

Fast forward to 2011. In the interim, I’ve successfully navigated a thin line between spiders and spiderlike things. Similar to the uncanny valley, the less real or accurate a depiction of a spider, the more likely that I will be able to have a normal, successful encounter with it. Then my carefully crafted shell of avoidance was shattered by Elder Scrolls V: Skyrim. Unlike Elder Scrolls IV: Oblivion, there are spiders in Skyrim. A lot of spiders.

In typical David fashion, my roommate was alerted to the presence of these spiders by my screaming and then gentle sobbing as the ominous cave music played from my TV. Spiders are actually common enough in Skyrim that a mod was developed which replaces spiders with bears. Unfortunately, it does not replace the webs. 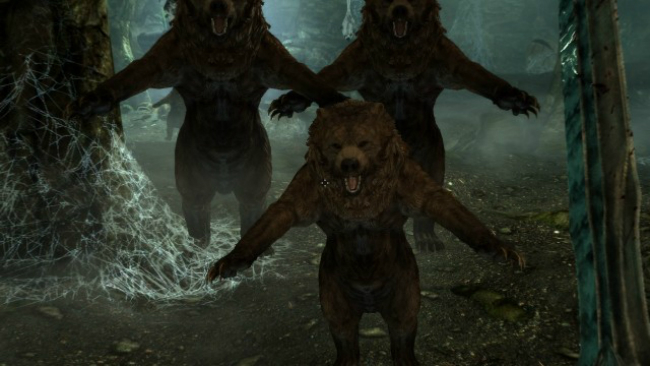 Only about 3-6% of the US population is irrationally afraid of spiders. Among them, most are not as irrationally afraid as I am. Recently I’ve been able to overcome my fear of the Minecraft spiders by squinting. In fact, this is how I handle most videogame spiders; I squint until they’re indistinguishable forms and mash buttons until I vanquish them.

Incidentally, this is not dissimilar to actual phobia treatment. Most therapy related to treating phobias is related to a kind of desensitization. The more one exposes oneself to these scenarios with clear goals, and in a somewhat controlled setting, the more one is able to overcome that fear. Even as early as the late 90’s researchers have been experimenting with ways to use VR as part of this desensitization therapy. Unlike in vivo therapy, VR has the advantage of more controls while maintaining a level of distance for those whose phobic reactions are very intense, or have specific phobias which are difficult to reproduce in a lab setting.

Maybe someday soon, and with a VR headset, I’ll be able to beat Rom, the Vacuous Spider in Bloodborne. Or I’ll run screaming from my apartment. Again.