Are you as smart as a chimpanzee? Don’t worry, most people aren’t. If you’re not sure, you can take a test here.

The point of that test is to show that most people under-estimate how well things are going in the world. Fewer people in the world are in extreme poverty than ever before. Girls have better access to education. Everyone’s healthier.

We are, despite all the war, prejudice, corruption and ice-cap melting, living at an apex of civilization. Perhaps at the apex: things might get better, rather than worse, especially if we ignore our problems. That’s why The Big Short was the most important film this year not to win an Academy Award for Best Picture.

The Big Short tells the story of the stupidity, corruption and negligence behind the 2007-2008 financial meltdown that tore the rugs from under the feet of a lot of people (by detaching those people from the houses containing those rugs). It’s the kind of tale that you’d ordinarily see on the Facebook wall of a weirdo. Not a bad weirdo, but someone you hung out with a bit at university, and was weird in a scatty, harmless way, but has lately turned it up to 100% crank-weird. Yet no-one really disagrees with anything The Big Short says, not even the people blogging under names that are just a patina of decorum away from being “Ayn Rand was right fuck everyone else I’m the only one who’s important here”.

It answers a lot of questions about why the stupidity and corruption could happen and provokes another important one: why are we letting it happen again?

Every time something terrible happens in the world – a refugee child is found dead on a beach; the financial systems of the world crumble like Wensleydale cheese under a hot grill; tiny things like that – the public is outraged, media outlets demand change, the people in power bow and scrape and apologize, and then nothing really happens and people start to overlook it. 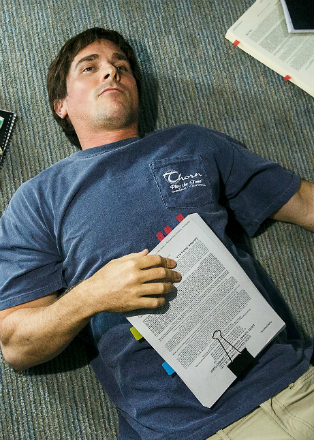 Why? Where does all that pressure go? Why does the boiling rage of the collective simmer down to a flavorless consomme of apathy, resentment and mistrust?

Partly it’s just the way we’re built. Human brains are apathy machines. Whenever something isn’t directly affecting our short-term goals, most people push it to one side to deal with later. And whenever we meet someone else who’s apathetic too, that just increases our own apathy.

I think when we come up against something as big and complex as the financial systems of the world, we feel too small to affect it in any meaningful way, so we burrow deep into that smallness, wrap ourselves up in a cloak of parochialism and just blame something else. Something easier to condemn, that doesn’t shroud itself in numbers and jargon, or something that marks itself out as problematic by stupidly having a different skin color or wearing cheaper clothes or having a funny accent.

The Fear of Missing Out on Fear