I know too many horror fans. My friends love the gory, the disturbing, the terrifying; they trace the lineages and evolutions of horror directors like trade routes for nightmares. This is often a point of contention between us. This time of year I’m constantly turning down invitations to midnight screenings and movie marathons, finding any excuse I can to weasel my way out of having to spend a few hours trying to fit my fingers both in my ears
and over my eyes.

The simplest explanation for this is that I’m a coward. But my distaste for horror films is deeper than that: I hate being forced to see people in pain. I
tend to get too emotionally invested in the characters in films, and as modern horror turns from jump scares and costumed monsters to psychological peril and tension I’ve found most of the genre utterly unwatchable.

I don’t want to witness people scream and panic, fray and collapse; even though I know they’re just actors, it feels like too much intimacy with the worst parts of human experience. It reminds me just how fragile security is, how little power we sometimes have in the face of a hostile world. I don’t like to remember times I’ve been in that position, nor do I like to see those situations taken to extremes.

This of course means I often can’t share in my friends’ interests, which feels especially poignant when a horror film is someone’s favorite or has had an impact on their life. I want to understand and take part in the things that bring them joy, but my own weakness prevents it. Being unable to stand the intimacy of horror films precludes an intimacy with people I care about, makes tiny fractures in our friendships, and keeps me from conversations that are both personally and culturally relevant.

Despite all of this, I recently watched the first two films in The Evil Dead series – absolute favorites of an ex-partner. I was inspired by a sudden 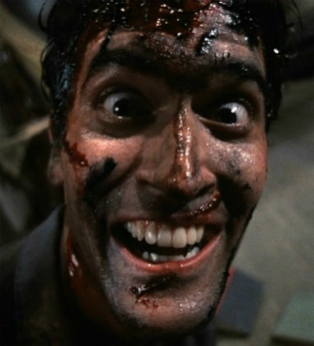 nostalgia for our relationship, an aching desire for closeness with someone who felt so far away.

As I watched, I tried to put space between the films and myself while at the same time leaning in, reading for a subtext of meaning and value in the unpredictable monsters and exaggerated facial expressions. The films were by turns both campy and distressing, but I forced myself to keep watching even when I wanted to look away, holding my hands in my lap so they wouldn’t come flying over my eyes in horror or my mouth in derision.

By the time I got to Evil Dead 2, I was surprised to find that instead of connecting with the terror of the people on screen, I was connecting with my absent ex. These movies mattered to someone I loved, were important in their life, and watching them through this lens reminded me how much I had wanted to hold that same place. How much I had wanted to matter and be important, too.

Both films are clumsy and physical. Heavy, with clunky special effects and blunt objects, and this quality reminded me of the messy, weighty thing that loving this particular person had been. Ash’s determination to save his friends even after they’re beyond saving reminded me of the fool’s errand that romance so often is.