First, a note of apology. We are sorry, Dear Reader. Between wrapping up Chanuka, gearing up for Christmas and the release of this indie movie with that guy from The Mosquito Coast and the lady who wrote Postcards From the Edge, the Last Week’s Comics team didn’t have much time to actually read new comics this week. While the rest of the Internet mourns a certain pop culture icon, we’re more interested in the murder of Namor the Sub-Mariner.

I only got to read one comic this week, not necessarily because I wanted to, but because of what it means for comics. This week, Marvel killed off one of the biggest assholes in comic book history – Namor, the Sub-Mariner, is dead. 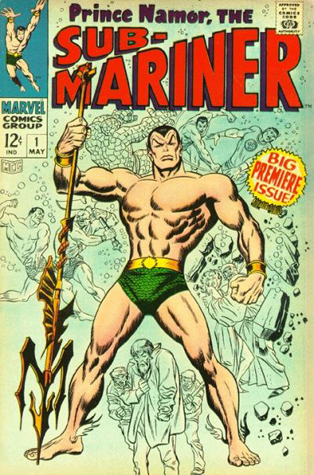 I know, death in superhero comics doesn’t mean much (unless you are Uncle Ben or the Waynes), but killing off Namor, one of the first Marvel Comics characters ever created, in the pages of Squadron Supreme # 1 says a lot about where Marvel is as a company.

Artist Bill Everett created the “Submariner” in 1939. Namor made his public debut within the pages of Marvel Comics # 1. There, he waged war on America. His motives were somewhat noble, making him more an antihero than supervillain. Issue after issue, Namor would plague the United States and even wound up fighting Marvel’s resident android, The Human Torch. When America joined the Allies in World War II, Namor allied himself with Captain America, Bucky and the other Marvel Golden Age superheroes and fought against the Axis powers. He was still a jerk though.

After the war, superheroes began to fade in popularity and so Namor faded with most of them. He popped back up as an amnesiac homeless man on the Bowery and took up his campaign against the surface world short order. He quickly became an integral thorn in the side of almost every Silver and Bronze Age Marvel character. Perfectly comfortable spending time with Doctor Doom on Thursday and Captain America on Friday, Namor is one of the few Marvel characters to develop deep ties to (and deeper enmity with) the Avengers, Fantastic Four, X-Men, Defenders, Illuminati and Cabal. The only Marvel team he never had much of a connection to, oddly enough, is the Squadron Supreme. Well, them and the Midnight Sons, but they mostly stayed away from water.

When they were first introduced in the Avengers, the Squadron Supreme were a team of superheroes from an alternate universe. They are analogs of the Justice League of America with Hyperion being their Superman, Power Princes being their Wonder Woman, Doctor Spectrum is their Green Lantern, etcetera, etcetera. They would wind up getting mind controlled here and there and fought the Avengers until said mind control wore off and they teamed up. The Squadron was a chance for the House of Ideas to poke fun at their Distinguished Competition.

Marvel reinvented the Squadron over the decades. There was a critically acclaimed 1980s miniseries that thematically paved the way for Watchmen. J. Michael Straczynski and Gary Frank re-imagined them in MAX series, Supreme Power (a cynical, rated R Justice League that meandered so much I don’t think it ever actually got to end). Most recently, multiple versions of Squadron members popped up in Jonathan Hickman’s Crisis on Infini… err… Avengers and New Avengers mutiversal incursion story (ie the three year lead up to Secret Wars). 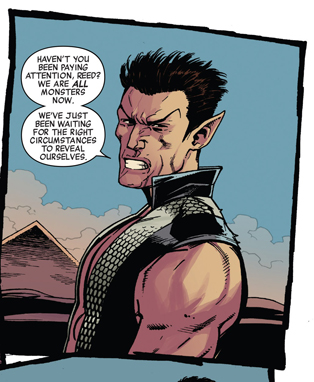 During that Hickman run, Namor the Sub-Mariner and the rest of Marvel’s Illuminati learned that multiple alternate Earths were crashing into each other and exploding. The Illuminati tried to find a way to save the classic Marvel Universe, but Namor, ever the colossal dick, rounded up a bunch of supervillains and started destroying alternate Earths. The current Squadron Supreme is made up of heroes from worlds destroyed by these incursions, including a Doctor Spectrum from a world Namor destroyed.

James Robinson and Leonard Kirk do a good job compressing that giant headache of a story into digestible exposition and provide motivation for the team’s mission to kill Namor. However, their decision to destroy Atlantis just seemed petty. Admittedly, my taste for superheroes acting like the Punisher has dissipated over the years, but I generally like this team. I dug their Batman: One Year Later story arc and Robinson will always get my leeway and attention thanks to Leave it to Chance and Starman. Afterall, this isn’t the Justice League, this is a team made up of people from dead worlds. It’s just a damn shame they had to take a Marvel cornerstone like Namor, the Sub-Mariner out of the equation (even though he pretty much had it coming).

The X-Men have been sidelined and the Fantastic Four don’t currently exist in the post Secret Wars Marvel Universe. Fox has the right to those properties so similar properties like the Inhumans and the Guardians of the Galaxy have risen to prominence. Marvel has mostly denied one has anything to do with the other, but one can easily argue that a rose by any other name is still a prickly bastard. It makes good business sense for a company to push properties they 100% control versus those a they do not. And Marvel doesn’t completely own the Sub-Mariner. 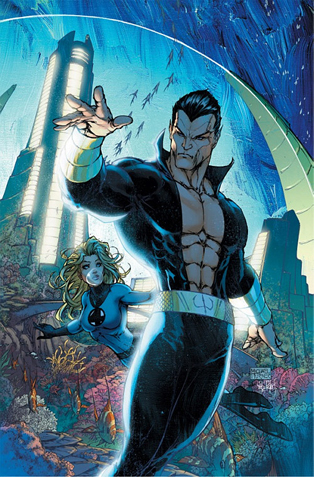 In an interview with IGN in July of 2014, Marvel Studios president, Kevin Feige said of a Sub-Mariner movie, “Let’s put it this way – there are entanglements that make it less easy. There are older contracts that still involve other parties that mean we need to work things out before we move forward on it.” Since those Marvel movies and the merchandise they sell won’t be having Namor anytime soon, it’s no wonder he became a sacrificial lamb.

Namor now follows in the footsteps of the Watcher, the original Nick Fury, Wolverine and the Fantastic Four comic. He’s gone for now. Since he has no chance of being in a movie anytime soon, his return probably won’t be that much of a priority. Hell, Doctor Druid probably has a better chance at a return than Namor does. Imperious Rex (Atlantean for “that’s some bullshit”)!

I Will Go Down With This Trash Ship