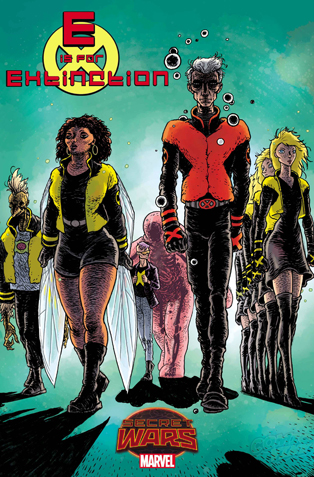 E is for Extinction #1

I love it when the X-Men are weird.

Marvel’s Secret Wars event is proving to be a great opportunity for creators to revisit different aspects of Marvel history. A lot of the Secret Wars tie-ins revisit alternate timelines like in Old Man Logan or Years of Future Past or past stories like Pre “One More Day” Spider-Man in Amazing Spider-Man: Renew Your Vows or the Korvac Saga. E is for Extinction falls into the latter category, but it does more than visit an old storyline, Chris Burnham, Ramon Villalobos and company are also exploring an aesthetic.

Grant Morrison, Frank Quitely and a host of artists established a particular look for the X-Men comics in their New X-Men series. Gone was the spandex, in was a more movie friendly X-Men uniform. The X-Men wore black jackets with a big yellow X on them. The Xavier Institute was host to all manner of mutants, most of them not as handsome as Archangel or beautiful as Jean Grey. Beak was downright ugly! The run explored the education aspect of the X-Men in a world that began to fear and hate mutants just a little bit less. Heck, some people actually want to be them!

E is for Extinction takes that ball and runs with it. The series takes place after the New X-Men series and a few things are different. Xavier is dead, the original X-Men lost the bulk of their powers and Magneto is running the Xavier Institute. There are a few odd mentions of Doom as to remind readers that this does take place on Battle World, but it mostly sticks to a world where Beak, Angel, Quentin Quire, Dust, the Stepford Cuckoos, Basilisk and Glob are Magneto’s new X-Men.

As Magneto’s team fights off humans that want to steal mutants’ powers for themselves, the original X-Men are revealed to have lost a lot of their powers. Cyclops’ optic blasts aren’t as powerful as they were. Emma Frost can’t read you like an open book and Wolverine heals very slowly. After an encounter with Magneto and his team, the original X-Men work on a plan to get their powers back.

The book is about dueling ideals like all the best X-Men books. Here, the original team represents the past. They’re the first batch of mutants who still cling to the human world. Heck, there’s a scene where Emma Frost helps Cyclops learn to use his optic powers to change the TV channel without a remote! Magneto’s team fully embraces mutant culture. They’re not human, they’re different and they celebrate that difference proudly. Look no further than Angel and Beak’s kids if you want something to back that up!

Chris Burnhan, Ramon Villalobos and friends capture the feel of Grant Morrison, Frank Quitely and friends’ classic run.The first issue sets up the ideologies then sets them up to crash together in a disastrous and weird fashion. I dug it a whole lot and can’t wait for # 2. 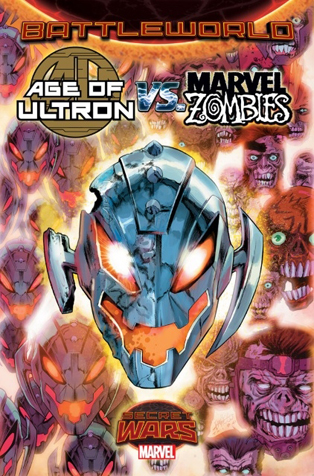 Age of Ultron vs. Marvel Zombies #1

I wasn’t a huge Marvel Zombies fan. After the original 2005 series written by Robert Kirkman wrapped up I was pretty much done dabbling in that world, yet there were so many more Marvel Zombies miniseries where the zombies basically conquered the universe or something. Ok I admit the crossover with Army Of Darkness was fun, but looking at Wikipedia I see that there were five separate miniseries, way too many! I wasn’t a huge Age of Ultron fan either. The resolution of that series felt like Marvel doing their version of DC’s original 52 series, but somehow even sloppier. Weirdly, I like the first issue of this comic combining the two of them though.

Seeing these two polar opposite villainous forces square off against one another actually works. It’s a fun horror/sci-fi concept, and the way writer James Robinson sneaks in Hank Pym as the main character of the series at the end of this issue is now what has me curious to read more. Having a faction of Pym and some Marvel robots with an agenda actually ups the ante for what the payoff will be for this series. What it ultimately gets me excited about it is that it brings in a capable team of random good guys who may be able to end these two annoying factions once and for all.

I found this to be a fun and tight issue where we got some great moments of action of the variety promised by the title of the series. There’s a wonderful Steve Pugh spread of rotting Marvel villains fighting a legion of Ultrons that alone is worth the price tag of this issue. Pugh does a great job during his art segments of showcasing the insane horror beyond the wall in the zone know as “The Deadlands”. His renditions of gore and viscera are also not too shabby. The only thing I wonder is if these villain zombies are as indestructible as the heroes of the other Marvel Zombies series. Otherwise it’s been nice knowing you decapitated Boomerang!

Ron Garney and Matt Milla also have some nice art moments. Their segment showcasing the fall of this world to Ultron features a lot of nice shots of the heroes of the Marvel U being decimated by Ultron. The segments drawn by Pugh with Pym at the end truly exist in another world, which is perfect for the hell of machines and rotting flesh that he’s getting into.

If I had any issues at all with this comic it was with some of Robinson’s writing choices. For a simple example what happened to Tigra in the beginning? Also some of the tonal and chronological shifts that he went for didn’t exactly land for me. There was a lot of ground to cover with this issue so I can let it pass though.

What we’ve got here is a fun set up issue that gives us robots vs. zombies, and a nice cliffhanger at the end. Having indulged in way more Battleworld than I initially planned I can say now that it’s an interesting experiment that I guess I’m in now for the long haul. What the far-reaching ramifications of all this will be still remains to be seen, as of now it looks like we’re just getting peaks into the windows of alternate realities, like a lot of different What If? scenarios being tossed in a blender. That said, here’s hoping Team Pym can wipe out the Ultrons and Marvel Zombies forever.