Reading this issue of Action Comics is like walking through the mind of an ADHD sufferer. The comic has everything Superman fans would want – the Legion of Superheroes, Mr. Mxyzptlk and a boatload of action. But the story is so disjointed that it’s a pacing nightmare. The one saving grace is Brad Walker’s and Rags Morales’ art. 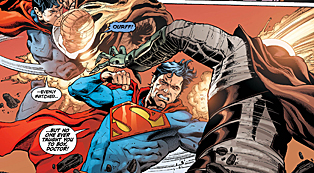 Walker’s Superman is akin to Gary Frank’s. He’s powerful and heroic, and in the action scenes, he never loses his sharpness. Mxyzptlk is a weird mixture of spindly arms, fingers and faces. Whereas he used to look like a little person wearing a funny hat, now he’s disturbing. Gone is the mischievousness; in its place is a callousness that makes the character disturbing and violent, making him a more imposing villain.

Morrison’s story, however, is all over the place. The comic bounces between scenes without any connectivity. For example, Superman is suddenly wearing a chain of Kryptonite but we never find out how he got it. Similarly, Krypto appears, the Legion of Superheroes is attempting to steal a time bubble and Superman is being exposed to different types of Kryptonite. But all of this occurs without clear direction, and my head was left spinning when I finished reading the book.

Grant Morrison is capable of doing such great things with Superman, so I think he gets a lot of carte blanche from the DC staff. But when the end result is a confusing and erratic comic of a hero who’s meant to be one of the flagship characters, someone needs to step in and create some order. Luckily, the book is good-looking, and that helps dampen the turbulent pacing. 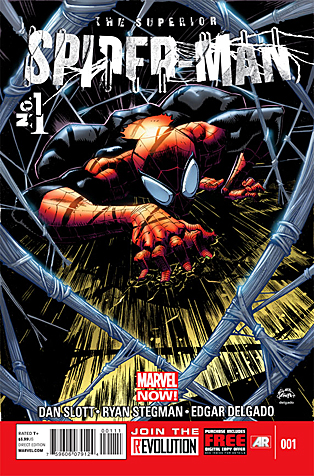 I’m torn about this book. The only way Dan Slott seems to know how to show Doctor Octopus inhabiting Peter Parker’s body is through arrogant behavior and archaic dialogue. Think Mr. Burns from The Simpsons. Ock does make some upgrades to Peter’s suit. But this issue makes the mind/body switch seem like a gimmicky attempt at selling comics.

The parts of the book that work well are those that show Ock’s calculating nature. He’s known as the master planner, and here we see why. The final battle between him and a group of C-list villains claiming to be the new Sinister Six is clearly plotted and well-paced. Where the book separates itself is in seeing how Ock can lose control in Peter’s body. This was teased in Amazing Spider-Man and not fully explored here, but it makes for an interesting conflict.

Slott also delivers the means for Peter Parker’s return, and you’ve probably guessed it before he showed it. Unfortunately, I don’t think many people will be surprised. In casual discussions with people who heard about the big switcheroo, almost everyone guessed how Peter would come back. Slott took a big chance with his concept; hopefully he’ll be cleverer with Peter’s homecoming.

The comic also introduces Ryan Stegman to Dan Slott’s world. Those who have been reading Amazing Spider-Man won’t see a major difference between Stegman and Slott’s longtime partner, Humberto Ramos. Stegman’s characters are also lithe and cartoonish. The imagery is a bit edgier, mostly in its inking, but when Stegman gets the opportunity to depict action, he shines. The tight, bloody shots of Ock beating Boomerang are the best part of the book, and I wish Stegman had more opportunities for this kind of compact action because he’s great at it.

This comic has all the trimmings associated with major changes. If you’ve ever read an issue where a hero changes his costume, or someone else takes over for him, you’ve read Superior Spider-Man. Slott does his best to introduce his new hero and show readers what he can do, but this is a concept we’ve seen before. I’m hoping the series picks up because I’d like to see Ock do more than be a deliberately overt change from Peter Parker.

Because Slott’s a better writer, and readers will only tolerate this for so long. 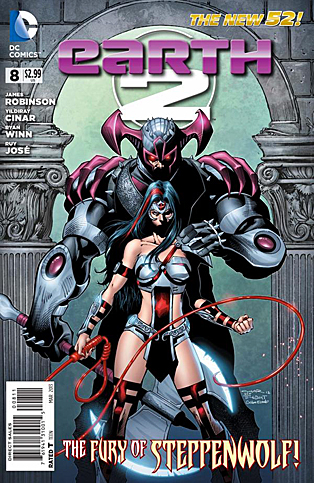 Bannen’s Book of the Week: Earth 2 really stalled out in its last few issues. Whereas the comic opened explosively with the deaths of Batman, Superman and Wonder Woman, the following story about the wonders and Solomon Grundy dragged on while trying to build to an emotional climax. In issue #8, however, Robinson focuses on Steppenwolf and his apparent rise to power in an action-heavy and popcorn fun comic.

Part of the improvement is in Yildiray Cinar’s art. Sleek and clean, the imagery is a vast upgrade from the chalky, murky styling of Nicola Scott (and I use these terms because of what Scott had to draw – the dying, nutrient-zapped Earth – not because she’s a bad artist). Each panel is vivid and detailed. Despite Steppenwolf’s cumbersome armor, he looks fluid and imposing. Fury is ferocious and indiscriminate in her violence. Alex Sinclair’s gorgeous colors bring the action to life and make the book visually engaging.

Robinson’s story, as well, is surprisingly tight. The issue starts off a bit exposition-heavy, but unlike in his previous work, Robinson dispenses with the plotting quickly. Everything readers need to know about Steppenwolf, King Marov and Fury is laid out in six pages. Then the comic picks up the pace and doesn’t slow down until its violent, shocking climax. Whereas Grundy wasn’t much of a villain in the previous arc, Steppenwolf poses much greater issues for the heroes. And I look forward to seeing how they try to defeat him.

This comic caught me by surprise. Robinson’s pacing is stronger, the art is better, characters are more interesting and Robinson shows that he can craft intense action. If you stepped away from this title, I’d recommend giving it another shot. Hopefully, this issue is a harbinger of things to come.