If you’re any kind of human being, right about now you’re spreading fake webs around your house, eyeing pumpkins to slice up like you were Michael Mayers, and wondering what weird concoction of high proof liquor to serve at your Halloween party. Or, you’re at least planning on attending a Halloween party/taking in Halloween-centric entertainment.

It’s a few years old, but Michael Dougherty’s Trick r’ Treat endures as one of the best horror movies for the season. This anthology follows four stories that all take place in a small town on Halloween night.


Fans have been crying for a Trick r’ Treat 2 for ages now, but with little response.

Your ghoulish prayers have been answered, but maybe not in the time frame you might want. Dougherty said in an interview with IGN that Trick r’ Treat 2 has been “simmering in the background.”

The front of the stove has seen Krampus, Dougherty’s current project about folklore’s famous “anti-santa” that steals bad children away with chains, and hooks, and other Hellraiser inspired instruments.  Krampus looks pretty spooky and fun in the way that Trick r’ Treat is, but in a Christmas sort
of way.

But Christmas isn’t the reason for the season. We want to see dead leaves, and pumpkins, and little dudes dressed in burlap sacks! 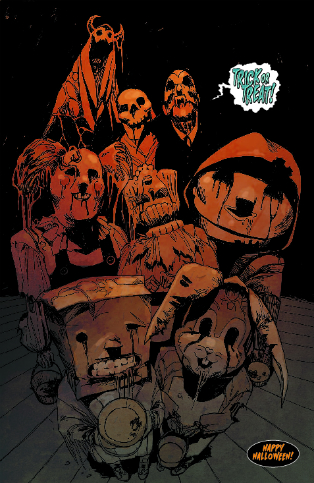 Well, I’m sad to announce that Trick r’ Treat 2 is dancing around in development. The good news? You can get your fix of the Halloween-themed horror in comic book form right now. Last last month DC Comics released a Trick r’ Treat graphic novel. It might not be a new film, but hopefully it will hold horror hounds until the celluloid can catch up.

Trick r’ Treat: Days of the Dead is a 144 page prequel to the events of the first movie. The horror  has agood pedigree behind its production, too. Marc Andreyko, writer of Manhunter, Torso, and plenty of Batman comics steps up as the author; no shortage darkness there.

A litany of animators make appearances in the book, too, including Mike Huddleston (Man-Bat, Gen 13), Christopher Gugliotti (The Texas Chainsaw Massacre), and Fiona Staples (North 40). All totaled, this is a veritable murderer’s row of people that know their ways around colored pencils and violence.

There isn’t a release date for Trick r’ Treat 2 yet, so it may be safe to set your sights on next Halloween. Stay positive though! You’ve got a sweet comic to chew through, and, hey, is there really anything wrong with Trick r’ Treat 1? If you haven’t seen it, grab that thing off Amazon for your Halloween festivities. It’s like three dollars to rent.

Talking About We Need to Talk About Kevin
Previous Post