“There is a state of war all around you. A shortage of coffins means the dead are wrapped in shrouds.” The camera pans across a crowd gathered on the street, mourning a heap of bodies swaddled in sheets. Some of them are taking photographs on their phones. “You and your family must escape to safety and to find work to survive. You could take your chances and leave for Europe or seek immediate shelter.” What do you do?

Welcome to Homs. Or Damascus. Or Sudan or Eritrea. Wherever you begin Two Billion Miles, you won’t be staying long. No, you will be struggling for
thousands of miles across continents in the backs of trucks or on foot, trying not to be murdered or hoping that you will be freed soon by the militia who have penned you up in an old zoo. Often your hope is just that you won’t be sleeping rough again tonight.

Two Billion Miles takes the choice-driven core of a game like 80 Days or the Choose Your Own Adventure gamebooks, strips out everything else and
replaces it with footage from Britain’s Channel 4 News of the conditions that refugees are running from and walking into.

As a player, your choices are limited. Gamble on dying on a boat in the middle of the Mediterranean or start a long, cold walk? Take a cheap ride across the Sahara in a pickup truck or risk being kidnapped by smugglers? You have no other options. You cannot stay. You cannot continue whatever life you had before. Were you a doctor? A teacher? Middle-class, kids in school paying the rent on time? It doesn’t matter. Now you are a refugee and you can’t be here.

The game reminds you of the individuals crowded behind the word “refugee”. It is sometimes heavy-handed, telling you how to feel as much as letting you feel that way, but it lets you experience lives and situations unlike anything else I have ever seen in a game. Two Billion Miles shows you 3000 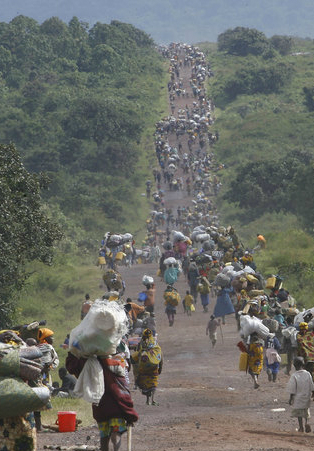 people living together in a deserted shopping mall, sharing 1 water source and 7 porta-potties between them, and then it makes you one of those people.

Everyone who looks at a refugee and sees another number or a threat should play Two Billion Miles. Every person who has commented beneath 500 words of Daily Mail fearmongering on refugees that they “would prefer to see their dead bodies piled high rather than have them enter my country” (yeah Charles from the United Kingdom, I’m looking at you) or “put 50,000 volts through the fence that will stop them from coming [sic]” should play it. They won’t, but they should.

You should play Two Billion Miles, too. No matter where in the world your story will start, it will always be clear that you aren’t only starting a new game, but experiencing a life that has already been lived. You will be walking the miles that another human being has walked. And witnessing the troubles that they have had to overcome, if they could. Even the best endings I have achieved so far come with the sense that I have been lucky, both in the game and in real life.

Experience it yourself for free at twobillionmiles.com/