James Bond has a long and storied tradition in both the printed word and in cinema. When it comes to comics though, there are precious few. His

probable ancestor, Campion Bond, is in League of Extraordinary Gentlemen. I seem to recall a stray movie adaptation or two Eclipse. Then there’s Marvel’s James Bond Jr. tie-in comics. For such a famed character, there aren’t anywhere near as many comics about him as one would think.

Dynamite Comics has, in turn, made sure to publish a James Bond comic that lives up to the character’s legacy by two well-suited comic creators. Warren Ellis and James Bond go together like bacon and Nutella. As soon as the two come together, you ache over why you hadn’t thought of the pairing sooner. Jason Masters’ art and character design draw inspiration from all over Bond’s history to give readers something that is both iconically James Bond while simultaneously being a new take on the character.

The issue begins in Helsinki. It’s a cold open (a staple of the Bond’s cinematic exploits). 007 chases a guy who looks like he’d be at home with the local neo-nazi chapter. Bond pursues him through a construction site. It’s a brutal scene, as Bond throws a cinder block at the guy’s back. That’s just the start of a violent and bloody game of cat and mouse that ends in a very familiar visual cue as Bond prepares to execute his quarry. This is James Bond.

The action then moves to set up the plot. On the surface, “Vargr” seems to be about a drug hitting the London streets that has an unusual chemical composition. Bond spends the rest of the issue at MI-6 headquarters as M briefs him on his mission. Here, we meet all the classic Bond supporting cast. 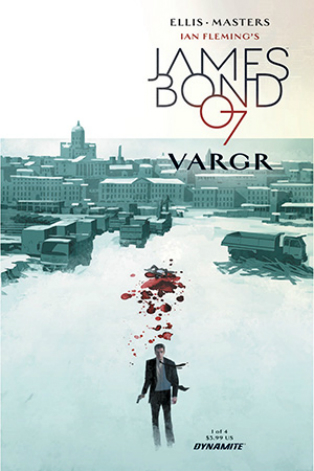 Moneypenny looks to be inspired by Naomie Harris’ version. M is, as far as I know, all new. I can’t quite place Bill Tanner either. The real treat though, is Q.

Q is visually based on Geoffrey Boothroy. Mr. Boothroy was a fan of Ian Fleming’s Bond novels and proceeded to write Fleming when he thought 007’s choices of guns and holsters didn’t feel authentic. Fleming then wrote Boothroy into the Dr. No novel and the BBC wound up producing a special about him entitled, The Guns of James Bond (a video that is available on the Dr. No DVD… and Youtube). Ellis and Masters’ Q lifts a few lines right from Boothroy’s own observations about James Bond’s gun and holster and it’s pretty damn fun.

James Bond # 1 starts as an action-packed comic that then slows down to do some plot setup and world building. While I wish there was more action in the issue, the strength of that cold open and the obscure Easter Egginess of the Q scene have me anxiously awaiting James Bond # 2.

And so the saga of the “All New” and “Uncanny” X-Men ends not with a bang, or even a whimper, but lots of yelling. And no resolution.

But did anyone believe there would be an “ending” proper for the X-Men? (Psst… the answer is no.) This is merely the end of Brian Michael Bendis’ run with the X-Men, and change their landscape he did. His wo 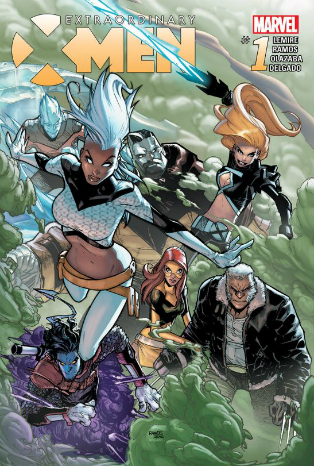 rk on the All-New… and Uncanny… books paralleled and intersected each other, brought back new and old characters, ended lives, and gave me something to both look forward to with joy some months, and be aggravated by and threaten to stop reading some others. But, as Bendis says in his farewell, “(f)or the X-Men it is never over.” At least Scott Summers was only minimally annoying.

So where do we go after Uncanny X-Men #600? There are so damn many X-Men, there are bound to be multiple X-titles. Plus, there’s money in multiple titles of a money franchise. Also, despite my oft-repeated claim that I don’t read previews and solicitations, and my sincere effort to read issue #600 without the aid of knowing what will come, sometimes I can’t help but take a peek. It takes serious restraint not to look ahead! So in the interests of not going off half-cocked and looking like an ignoramus (well, some things will never change) I did take a peek. I spy at least two other X-titles, other than Extraordinary X-Men, to help carry the weight.

Some of the kids who joined the X-Men during Bendis’ run have real lasting power, and deserve to be featured on the team (like how Grant Morrison’s Stepford sisters have been integrated.) Eva Bell is the first that comes to mind. She’s got depth and some mystery, seeming to be traveling a similar path as Magik. Fabio “Goldballs” Medina has the power of the underdog (though I’m sure he’ll get annoying like young Iceman.) Triage, Benjamin Deeds, and even Hijack all are more memorable than some of the background characters we often see floating around whatever the X-Men’s school is called this week (like that blob with the skeleton inside.) X-23 fit in nicely, but she has another job in the “All-New, All-Different” Marvel Universe.

Eva Bell does make an (unfortunately short) appearance, as a last ditch effort at getting Beast to see the wrongs he perpetrated by bringing the original X-Men to the present. Beast is finally knocked from his obstinate perch and heads off in search of answers to Eva’s mysterious clues. However, the readers don’t see which path this sends him down. This very special issue instead ends with an almost feature-length black-and-white Iceman solo tale, done up in the style of yesteryear. Wholly unnecessary and a waste of time, not to mention padding the cover price.

Art duties for Uncanny X-Men #600 are spread over a cast of seven. I initially doubted this would work, thinking that giving an odd page here or there to different artists would distract from the story flow. The art division is handled well, with each artist taking a separate chapter, so to speak. 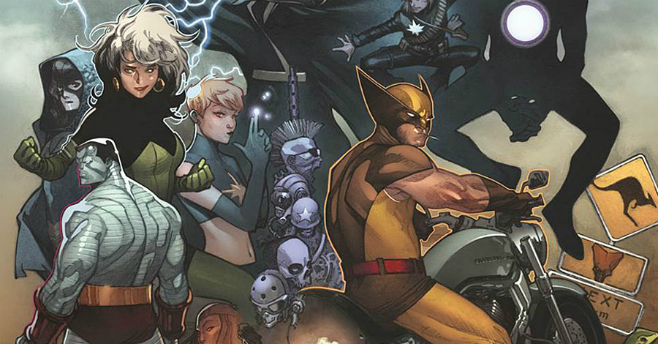 Over in Extraordinary X-Men #1, there’s a crisis right off the bat. Humans hate mutants and the source of power for the Inhumans is sterilizing and killing off mutants. This jump into critical level, fight for survival might seem more significant if we had the time off from the X-titles we should have had if Uncanny X-Men #600 came out six months ago as it should have. The X-crew in this book is lead by Storm (who I’ve always liked as a leader) and features an adult Iceman, Nightcrawler, Magik, Colossus, and more surely to be announced. Young Jean Grey is on the periphery, trying to distance herself from the chaos of being a superhero and enjoying the new lease on life she has by being stuck in the present, but I feel that won’t last long.

So this new crisis has Storm rallying the troops to “X-Haven,” the current refuge for remaining mutants. When reaching out to Jean, Storm comes across as wholly uncaring, and kind of a bully, in her attempt at convincing Jean to come home. There are a few mentions of something “Scott Summers did” (I don’t know, as I haven’t read “Secret Wars” yet. I’m definitely waiting for the trade. No way I can afford the time or money for that multi-title crossover cluster.) His actions are still a secret by the end of the issue.

Oh, and Logan is floating out there somewhere.

So where does this all lead for fans of the X-Men? Should all of the subsequent X-titles have come out at the same time as Extraordinary X-Men #1? (Psst… the answer is yes.) How do we decide what titles to buy? Do I want to read some or all of them? I’m sure I’m not the only reader who fights the monthly battle of time/money to spend versus obsessively needing to see what happens next. The thought I keep returning to is that Uncanny X-Men #600 should have come out, readers should have been given several real-world months reprieve to digest Secret Wars (there is supposed to be an eight month gap after Secret Wars after all,) then the new X-titles roll out at the same time. This path would give more weight and feeling to which character winds up where, and another universe-altering crisis would seem more realistic, even if introduced in the first issues of the various X-titles.

But what would be left for me to complain about each month?.