When Karen O talked to Rolling Stone about the song she wrote for Rise of the Tomb Raider, “I Shall Rise,” she said she wasn’t a gamer, and wasn’t likely to become one any time soon.

What Microsoft wanted from her was to use the themes of the game – transformation, in particular – and do what she’d done for The Girl With The

, Her and Where The Wild Things Are. Karen O likes doing soundtrack work, she likes creating music from a narrative, and what she wrote is arguably the best song commissioned for a videogame because of it.

Most games don’t fare this well when they reach into popular music to pad their score. Trent Reznor’s score for Call of Duty Black Ops 2 sounds a bit like b-sides from the Fragile, or a low effort from someone mimicking the late period Nine Inch Nails sound. It’s especially embarrassing in comparison to his work on The Social Network.

Despite everything Reznor had to say while working on this score, and how well documented his appreciation for videogames is, the relationship between this music and the game it appears in is tenuous at best. The truth is, when games try to commission a summer blockbuster pop track, they end up with Hologram Sir Paul McCartney more often than anything worth listening to.

Music that’s commissioned for videogames has more in common with Christian Rock than actual pop music – it’s following old trends to try and reach a current audience to convince them that they know what cool is. Paul McCartney’s “Hope for the Future” is as bland and soulless of a song as “God’s Not Dead” by the Newsboys.

Both of these songs are trying to sell a product that you’re supposed to be evangelical about – neither feels like a song you’d listen to more than once. Neither of them have anything in specific to say; about what 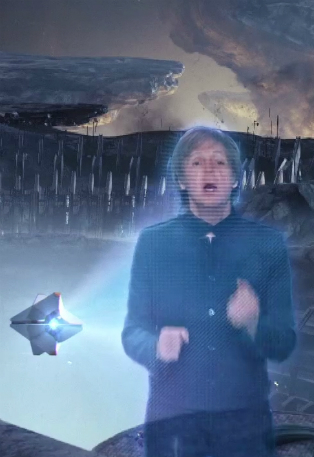 these people believe in (either God or “The Future”), or really about what the things they’re trying to sell you.

What does “the future” mean to Paul McCartney? Lyrics like, “We will build bridges to the sky, heavenly lights surrounding you and I,” doesn’t really give me much to hold on to.

I hope that Rise of the Tomb Raider is as good of a game as “I Shall Rise” is a song. It’s perfectly suited for a game – an endless crescendo of perfectly honed melodrama – and O’s crinkly voice feels sincere and hopeful.
In three minutes time, I have become more excited for this game than I was before hearing it. Even its lyrics are evocative images you’re likely to see in the game. “As I cross the raging sea, waves are crashing over me,” she sings, “they drag me down, they drag me down. I will not drown.”

Talking about her process to Rolling Stone, O said, “I picked up a Book of Hymns, thumbed through it and was really into how much melodrama there was. … That sparked some inspiration for the lyrics to this with the themes of survival against the elements and the transformation of being reborn.”

Well, that’s a kind of game I’d like to play. Rise of the Tomb Raider, which released on November 10th, has a lot to live up to.