In March 2000, Eels released Daisies of the Galaxy and revealed to America that the band’s leader, Mark Oliver Everett, still wasn’t fine. His anguish, depression and self-debasement was only made starker by the album’s quick-fire melodies, horn section and the kind of cover art that recalls kids’ books about spunky Edwardian munchkins foiling the schemes of dastardly smugglers. George W. Bush’s presidential campaign called it an obscenity. Grandpa Pip’s Birthday is the videogame Daisies of the Galaxy.

Grandpa Pip’s Birthday is mostly a point and click adventure about prodding a sleepy, pixel art fantasy town into saving itself from the undead. It’s
set at Halloween, but despite all the ghosts, skeletons and demons, it doesn’t use pixel art to create horror in the way that Lone Survivor or Home do. Instead, it belongs to that age-old tradition of art that emphasizes just how terrible life is by gorging on cuteness and whimsy.

This cutesiness is a violent contrast to the callousness and self-interest of its inhabitants. It’s the sort of game in which, having just made you a bunch of flour, a miller will wave you goodbye, wish you a pleasant day and tell you that “Flour represents wheat’s screaming soul frozen in pain”. Before the 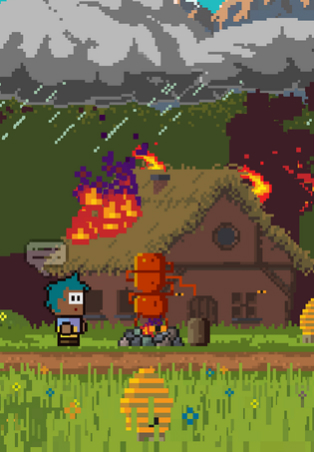 game even starts, a splash screen shows the villagers munching birthday cake while their home burns down around them. Behind the silly cartoon presentation lies cynicism, disappointment, and a macabre – often very funny – fascination with death.

Grandpa Pip’s Birthday is worth playing for that alone. It is also worth checking out for the world in which Grandpa Pip lives, which is two parts fantasy, one part anachronism and one part Irish folklore. The game pays more than lip service to the origins of Halloween in the yearly visits of Ireland’s ghosts to their family homes at the beginning of winter.

Grandpa Pip’s Birthday is only 10 minutes long. It’s more Daisies of the Galaxy: The EP than a full length opus, but it’s also free, fun, seasonal
and adorably cynical. You can find it on Gamejolt or, if you’d like to give the developers a bit of money for their efforts, on Itch.io.

Downfall Asks: How Do You Want to Spend the End of Days?
Previous Post