Mitch Alexander, the creator of Tusks: The Orc Dating Sim, has created a new entry in the dating sim genre with a very notable twist: the game’s cast consists of gay orcs.

Typically used in fantasy settings as a sort of homogenous group of senseless and violent creatures, orcs are usually depicted devoid of complex thoughts or feelings. In place of this oversimplified view, Alexander has imagined them as a group of misfits, united by their separation from normalized society. He says that “Tusks came out of a desire to want to be able to talk about, create stories involving and share ideas and experiences about queerness and community,” using orcs as a sort of allegory for the way LGBTQ folk are viewed in our own society.

The game begins in the aftermath of Uá, an annual cultural celebration for the various orcs of Alba to “come together as a united front, as one diverse people.”

Your character teams up with a group travelling northward, and the game unfolds over a series of several days, allowing you to choose who you spend your time with, both during the day, and at night. once you’ve set up camp. As you converse and attempt to seduce the other members of your group, you establish an identity for yourself based on the way you respond in conversation to the topic at hand.

Do you trust the human student Aed who is accompanying your group to study orc culture, or do you think he has a nefarious ulterior motive? Do you choose to indulge the philosophical musings of your clan leader’s husband, or do you scoff at his overactive imagination? Whichever perspective you choose, your teammates will take note, and their perceptions of you will change over time. 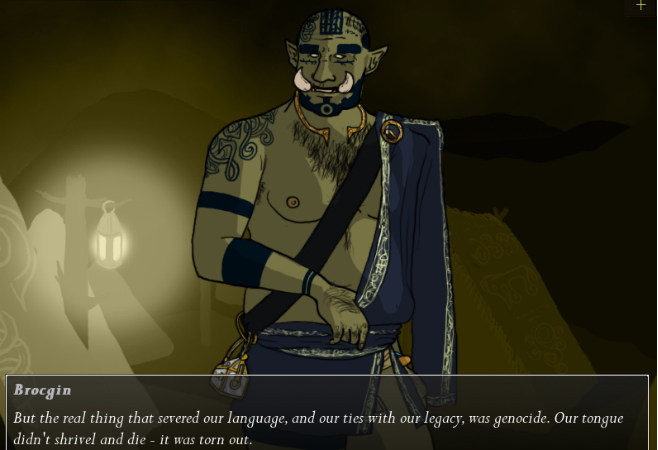 That is, of course, if you have the “NPC Autonomy” feature enabled. At the beginning of the game, you can choose whether or not you want the game’s characters to act independently of your choices as a player, piping up with opinions of their own from time to time. Alexander says the feature offers:

“…a way to shake things up a little – in a lot of dating sims, and games with similar mechanics, picking specific options will inevitably result in, say, the player unlocking a romance scene with their chosen suitor. If you’re into that sort of experience, you can play with NPC Autonomy off; with NPC Autonomy on, though, things become a little more uncertain. If you move in to kiss one of the characters, there’s a chance he’ll return it if he feels the same way about you — but there may also be a chance that he’s just not ready to take that step with you yet, or he may not be interested in you in that way at all.

It’s also used for non-romantic decisions as well – for example, you and the rest of the group can vote on what the group is called early in the first day of the game, which means you can make your own suggestion, which might even get turned down by the rest of the group — while someone else makes another, which everyone unanimously agrees to.

My hope is the feature helps to decentralize the player as ‘the most important thing in the whole game’, because it can be difficult telling meaningful stories about community and relationships if it’s always being undermined by the fact that the player is always in charge and in control.”

Though the game only exists in a short demo format so far, Alexander says “the reception has been extremely positive. There has been some negative 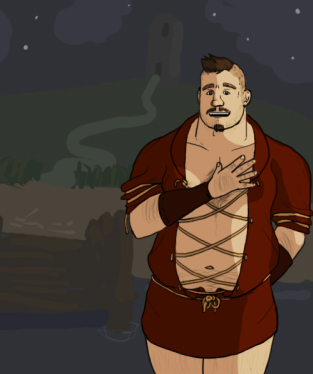 feedback, and even some straight-up awful, vicious responses to it, but compared to the people who’ve said they’ve enjoyed playing the demo, or who are looking forward to the full game, it’s nothing.”

Many have responded to the game’s atypical depiction of the gay community–instead of the hairless and impossibly buff images of gay men that have become all too common, the characters in Tusks have stretchmarks, bellies, and imperfections that might otherwise get smoothed out.

Alexander welcomes the feedback, saying “there are so many folk out there who are as into the ideas behind Tusks as I am. It’s so edifying seeing people post screenshots saying ‘I’ve felt this too!’ or messaging me saying ‘thank you’ for including certain lines of dialogue, characters or ideas in the game that are meaningful to them.”

The demo for Tusks: The Orc Dating Sim is available for download here. Be sure to keep up with Mitch Alexander on Twitter, support the game’s development on Patreon, or just follow its progress here.